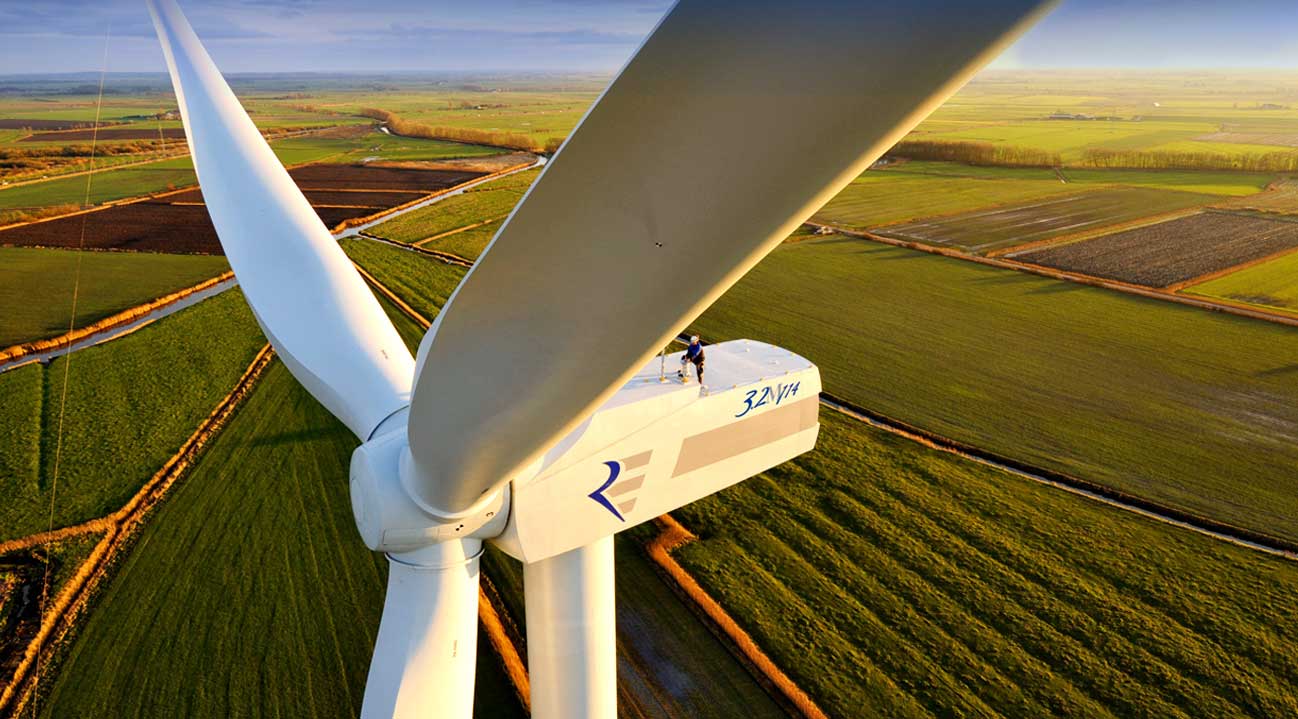 SustainableBusiness.com News: Did you ever wonder how wind turbines would withstand extreme weather events like tornadoes and hurricanes?

When the widest tornado ever measured on Earth flattened parts of Oklahoma this month that was a good time to find out. It was rated E5 – the most severe possible – and only the eighth of this magnitude since 1950 in the tornado-prone state. Two smallish wind turbines, which were being used for educational purposes at Canadian Valley Technology Center (CVTC) took a direct hit from the 295 per hour winds.
The 85- and 126-foot turbines were fully functional afterwards and there was no visible damage.

“Some news media outlets have inaccurately reported that a center’s child care facility was destroyed by a wind turbine rotor blade during the tornado. However, according to Canadian Valley Technology Center, while the storm did lift a turbine blade that was mounted to concrete blocks on the ground for training purposes, the blade was not attached to a turbine and did not destroy the building. The CVTC reports that the tornado “lifted and turned the blade and rested it against the building,” says Michele Mihelic in an AWEA blog.

Stories on the Internet about the turbine ‘flying off a tower and into the daycare center’ or destroying it are unfortunate and baseless,” says CVTC.

In short, this incident had nothing to do with an operating wind farm or wind turbine failure, and given that the size and power of the storm were enough to level commercial buildings and toss tractor trailers like toys, it’s not surprising that it could move a turbine blade that was lying on the ground, concludes Mihelic.

In fact, wind energy hit a record in Southern California during a severe storm. Although nowhere near tornado level, wind gusts were more than 70 miles per hour. Trees and power lines came down, but the turbines kept turning in the desert.

The same was true during Hurricane Irene, the category 1 hurricane with wind gusts of 86 miles per hour. Wind farms from Maine to Delaware survived without problems. They would have kept on operating had they not been disconnected from the grid before the storm hit.

However, there are damaged wind turbines from storm lightning or tornadoes, but damage depends on the wind turbine model (material) and flying debris. Because wind turbines offer a rather small surface for potential damages, they are perfectly suited for extreme environments. Even in an instance of damage, the fallout is rather limited when compared to other forms of energy generation.

I bookmarked your page, thankssssss