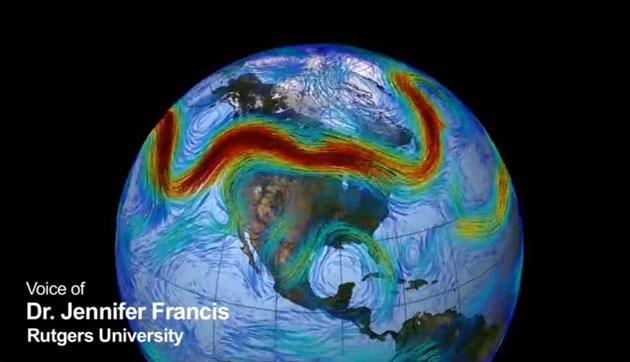 Peter Sinclair: Last year I spoke to Dr. Jeff Masters and Dr. Jennifer Francis about the emerging research linking “weather whiplash” events, back to back extremes of all  types that seem to have become our new normal, and the disappearance of arctic ice. This year, the extremes continue. I’ve revisited Dr. Francis on the issue, to talk about what last year’s “July in March” spring has in common with this year’s cold and sluggish roll into  summer here in North America.

Dr. Francis has become a bit of a rockstar on the Meteorology wonk circuit in the last year, as she makes a compelling case that the loss of arctic sea ice, and more broadly, polar amplification of climate change, and its effect on the jet stream, has been an important driver of the changes we have seen.  It appears that this may be an emergent property of atmospheric circulation that has not been well modeled or foreseen.

But it’s not pound-on-the-table-we’re-done science yet. I also talked to Dr. Kevin Trenberth,  who is not quite ready to go along with Francis’ model.  I’ll be posting his remarks,  Francis’ responses, and a synthesis by Dr. Masters, in a future video.

For now, an update on current observations.

[…] by Joe Romm, Jennifer Francis, one of the leading Scientist for Arctic Amplification commented on this […]