You are here:
ConflictNational Security 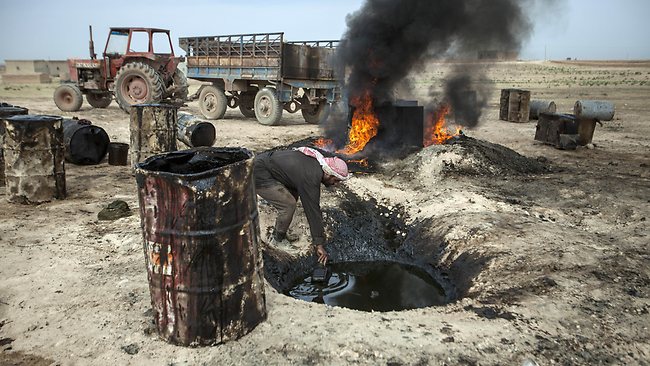 The civil war in Syria has been devastating, generating a death toll fast approaching 100,000, while uprooting millions of civilians from their homes.

But as the US and Russia signed an unprecedented accord on Wednesday in search of a political solution to an increasingly intractable conflict, its underlying causes in a fatal convergence of energy, climate and economic factors remain little understood.

The UN high commissioner for human rights has offered a conservative under-estimate of the death toll at about 70,000 people – accompanied by over 1 million Syrian refugees in neighbouring countries and more than 2 million people internally displaced. According to another independent study, about 79% of confirmed victims of violence in Syria have been civilians.

Although opposition fighters have been implicated in tremendous atrocities, international observers universally confirm the vast bulk of the increasingly sectarian violence to be the responsibility of Bashir al-Assad’s regime.

Yet the conflict is fast taking on international dimensions, with unconfirmed allegations that rebel forces might have used chemical weapons following hot on the heels of US-backed Israeli air strikes on Syrian military targets last weekend.

But the US, Israel and other external powers are hardly honest brokers. Behind the facade of humanitarian concern, familiar interests are at stake. Three months ago, Iraq gave the greenlight for the signing of a framework agreement for construction of pipelines to transport natural gas from Iran’s South Pars field – which it shares with Qatar – across Iraq, to Syria.

The Memorandum of Understanding (MoU) for the pipelines was signed in July last year – just as Syria’s civil war was spreading to Damascus and Aleppo – but the negotiations go back further to 2010. The pipeline, which could be extended to Lebanon and Europe, would potentially solidify Iran’s position as a formidable global player.

The Iran-Iraq-Syria pipeline plan is a “direct slap in the face” to Qatar’s plans for a countervailing pipeline running from Qatar’s North field, contiguous with Iran’s South Pars field, through Saudi Arabia, Jordan, Syria and on to Turkey, also with a view to supply European markets.

The difference is that the pipeline would bypass Russia.

Qatar, Saudi Arabia and Turkey have received covert support from Washington in the funneling of arms to the most virulent Islamist elements of the rebel movement, while Russia and Iran have supplied arms to Assad.

Israel also has a direct interest in countering the Iran-brokered pipeline. In 2003, just a month after the commencement of the Iraq War, US and Israeli government sources told The Guardian of plans to “build a pipeline to siphon oil from newly conquered Iraq to Israel” bypassing Syria.

The basis for the plan, known as the Haifa project, goes back to a 1975 MoU signed by then Secretary of State Henry Kissinger, “whereby the US would guarantee Israel’s oil reserves and energy supply in times of crisis.” As late as 2007, US and Israeli government officials were in discussion on costs and contingencies for the Iraq-Israel pipeline project.

Syria’s dash for gas has been spurred by its rapidly declining oil revenues, driven by the peak of its conventional oil production in 1996. Even before the war, the country’s rate of oil production had plummeted by nearly half, from a peak of just under 610,000 barrels per day (bpd) to approximately 385,000 bpd in 2010.

Since the war, production has dropped further still, once again by about half, as the rebels have taken control of key oil producing areas.

Faced with dwindling profits from oil exports and a fiscal deficit, the government was forced to slash fuel subsidies in May 2008 – which at the time consumed 15% of GDP. The price of petrol tripled overnight, fueling pressure on food prices.

The crunch came in the context of an intensifying and increasingly regular drought cycle linked to climate change. Between 2002 and 2008, the country’s total water resources dropped by half through both overuse and waste.

Once self-sufficient in wheat, Syria has become increasingly dependent on increasingly costly grain imports, which rose by 1m tonnes in 2011-12, then rose again by nearly 30% to about 4m in 2012-13. The drought ravaged Syria’s farmlands, led to several crop failures, and drove hundreds of thousands of people from predominantly Sunni rural areas into coastal cities traditionally dominated by the Alawite minority.

The exodus inflamed sectarian tensions rooted in Assad’s longstanding favouritism of his Alawite sect – many members of which are relatives and tribal allies – over the Sunni majority.

Since 2001 in particular, Syrian politics was increasingly repressive even by regional standards, while Assad’s focus on IMF-backed market reform escalated unemployment and inequality. The new economic policies undermined the rural Sunni poor while expanding the regime-linked private sector through a web of corrupt, government-backed joint ventures that empowered the Alawite military elite and a parasitic business aristocracy.

Then from 2010 to 2011, the price of wheat doubled – fueled by a combination of extreme weather events linked to climate change, oil price spikes and intensified speculation on food commodities – impacting on Syrian wheat imports. Assad’s inability to maintain subsidies due to rapidly declining oil revenues worsened the situation.

The food price hikes triggered the protests that evolved into armed rebellion, in response to Assad’s indiscriminate violence against demonstrators. The rural town of Dara’a, hit by five prior years of drought and water scarcity with little relief from the government, was a focal point for the 2011 protests.

The origins of Syria’s ‘war by proxy’ are therefore unmistakeable – the result of converging climate, oil and debt crises within a politically repressive state, the conflict’s future continues to be at the mercy of rival foreign geopolitical interests in dominating the energy corridors of the Middle East and North Africa.

But whoever wins this New Great Game, the Syrian people will end up losing.

As other oil exporters in the region approach production limits, and as climate change continues to wreak havoc in the world’s food basket regions, policy makers should remember that without deep-seated transformation of the region’s political and economic structures, Syria’s plight today may well offer a taste of things to come.

Dr Nafeez Ahmed is director of the Institute for Policy Research & Development and author of A User’s Guide to the Crisis of Civilisation: And How to Save It among other books. Follow him on Twitter@nafeezahmed

Some of Australia’s Military raise alarm over climate emergency in new climate change short film Home Front
June 5, 2019
Subscribe
0 Comments
Inline Feedbacks
View all comments
Go to Top
wpDiscuz
0
0
Would love your thoughts, please comment.x
()
x
| Reply
Cookie Consent
To provide the best experiences, we use technologies like cookies to store and/or access device information. Consenting to these technologies will allow us to process data such as browsing behavior or unique IDs on this site. Not consenting or withdrawing consent, may adversely affect certain features and functions. Learn more about the data usage on this website.
Manage options Manage services Manage vendors Read more about these purposes
View preferences
{title} {title} {title}
Loading Comments...