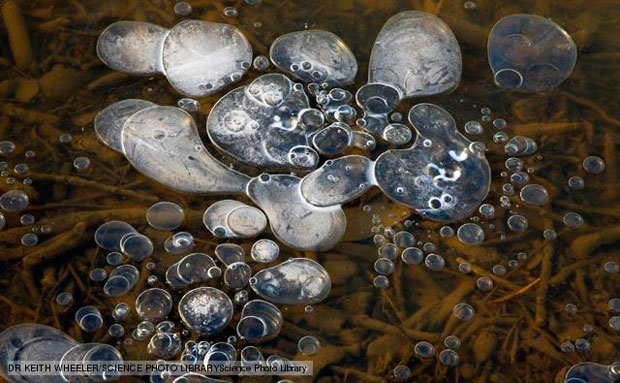 Wikipedia: Clathrate gun hypothesis is the popular name given to the hypothesis that rises in sea temperatures (and/or falls in sea level) can trigger the sudden release of methane from methane clathrate compounds buried in seabeds and permafrost which, because the methane itself is a powerful greenhouse gas, leads to further temperature rise and further methane clathrate destabilization – in effect initiating a runaway process (positive feedback loop) as irreversible, once started, as the firing of a gun.

In its original form, the hypothesis proposed that the “clathrate gun” could cause abrupt runaway warming in a timescale less than a human lifetime, and might be responsible for warming events in and at the end of the last ice age. This is now thought unlikely.

However, there is stronger evidence that runaway methane clathrate breakdown may have caused drastic alteration of the ocean environment and the atmosphere of earth on a number of occasions in the past, over timescales of tens of thousands of years; most notably in connection with the Permian extinction event, when 96% of all marine species became extinct 251 million years ago.

Yet, it is still argued that a potential positive feedback mechanism from clathrate dissociation would amplify future global warming. However, past hydrate dissociation at Svalbard eight thousand years ago has been attributed to isostatic rebound (continental uplift following deglaciation).

The SWIPA 2017 report notes, “Arctic sources and sinks of greenhouse gases are still hampered by data and knowledge gaps.”