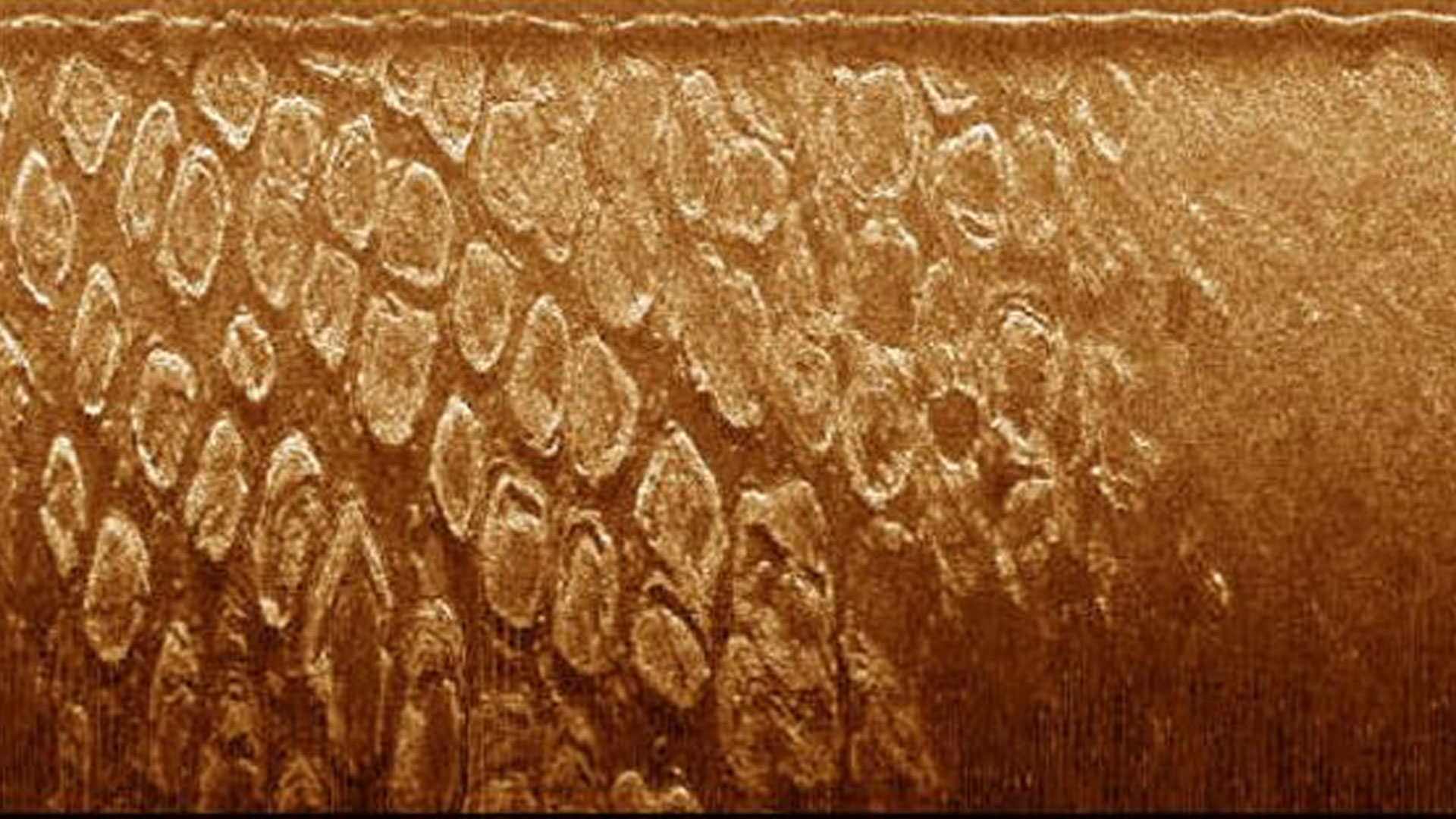 Methane hydrates are ice like structures forming a solid similar to ice. Significant amounts have been located under sediments on the ocean floors of the Earth. Generally, methane hydrates are more stable in fresh water than in salt water.

A region allowing the formation for methane hydrates (largely dependent on depth and pressure) is called the methane hydrate stability zone (MHSZ), usually located along the continental margins. However, this zone is also modulated by Ocean salinity, thickness becomes thinner with increased salinity.[1]

If methane is freed from it’s ice like cage it usually is broken down in the water column, not all of it ends up in the atmosphere.[2]

Such as increasingly observed with thawing permafrost landscapes in the Arctic regions, the authors found thermokarst patterns on the seafloor and gas-migration associated with submerged taliks, ice scouring and pockmarks. They further point out, Knowing the rate and mechanisms of subsea permafrost degradation is a prerequisite to meaningful predictions of near-future CH4 release in the Arctic.[6]

The scientists found that one of the reasons for extensive methane release from the bottom sediments of the East Siberian Arctic Shelf is the destabilization of underwater permafrost gas hydrates that interact with the salt solutions (sea water) migrating into the thawing submarine permafrost.[7]

The 2019 follow-up study, Role of Salt Migration in Destabilization of Intra Permafrost Hydrates in the Arctic Shelf: Experimental Modeling, notes:

Experiments showed that the migration of salts into frozen hydrate-containing sediments activates the decomposition of pore gas hydrates and increase the methane emission. These results allowed for an understanding of the mechanism of massive methane release from bottom sediments of the East Siberian Arctic shelf.[8]

Salinity is measured from space by ESA’s Soil Moisture and Ocean Salinity (SMOS) mission. The sea-surface salinity plays an important role in the thermohaline ocean circulation, and has been linked to the intensification of the global water cycle.[3] NASA’s Aquarius (2011-2015) and since 2015 SMAP’s satellite missions also track sea-surface salinity.[4]

Salinity measurements taken since the 1950s indicate global trends of saline areas of the ocean becoming saltier, and freshwater areas becoming fresher. The data for this however, is  relatively coarse, as it is taken from ships. Only since the beginning of the 21st century has a fleet of ocean buoys, called Argo, provided subsurface-salinity measurements.[3]

According to the 2012, study Ocean Salinities Reveal Strong Global Water Cycle Intensification During 1950 to 2000 – which draws conclusions based on sea-surface data:

Records showed that the saltier parts of the ocean increased salinity — or their salt content — by 4 percent in the 50 years between 1950 and 2000. If the climate warms by an additional 2 or 3 degrees, the researchers project that the water cycle will turn over more quickly, intensifying by almost 25 percent.

The ocean waters around Antarctica are getting less salty because the waters are being refreshed by the melting ice cap.[5]

The Arctic Ocean has the lowest average salinity, especially due to low evaporation (caused by reduced temperature).[12]

Arctic Ocean: During the winter, cold Alaskan winds blow over the Chukchi Sea, freezing the surface water and pushing this newly formed ice out to the Pacific. The speed of the ice drift is roughly 1–4 cm/s. This process leaves dense, salty waters in the sea that sink over the continental shelf into the western Arctic Ocean and create a halocline.

Halocline: In certain high latitude regions (such as the Arctic Ocean, Bering Sea, and the Southern Ocean) the surface waters are actually colder than the deep waters and the halocline is responsible for maintaining water column stability, isolating the surface waters from the deep waters. In these regions, the halocline is important in allowing for the formation of sea ice, and limiting the escape of carbon dioxide to the atmosphere.

A more comprehensive modeling approach by increasing river runoff to the Arctic Ocean in a coupled ice-ocean general circulation model, and show contrasting responses in the polar and subpolar regions. Within the Arctic, the stratification strengthens, the halocline and Atlantic Water layer warm, and the cyclonic circulation spins up, in agreement with previous work. In the subpolar North Atlantic, the model simulates a colder and fresher water column with weaker barotropic circulation.[16]

In our experiments, increasing runoff enhances the vertical salinity gradients (as in Spall [2013]), weakens the Beaufort Gyre (equivalent to reduction in the surface stress in Lique et al. [2015]), and produces larger transport in a wider baroclinic boundary current.[16]

The main Arctic Ocean responses to increased runoff are a fresher surface, a warmer halocline, and a warmer AW layer. The increased runoff leads to stronger stratification, which in turn sharpens the temperature gradient across the halocline. Deeper down, the AW layer becomes warmer and rises in the water column. These first-order results are consistent with previous idealized modeling efforts [Nummelin et al., 2015; Nilsson and Walin, 2010].[16]

A sharp increase in ocean temperature and salinity is apparent from the mid-2000s, which we show can be linked to a recent decline in sea-ice import and a corresponding loss in freshwater, leading to weakened ocean stratification, enhanced vertical mixing and increased upward fluxes of heat and salt that prevent sea-ice formation and increase ocean heat content. Thus, the northern Barents Sea may soon complete the transition from a cold and stratified Arctic to a warm and well-mixed Atlantic-dominated climate regime. Such a shift would have unknown consequences for the Barents Sea ecosystem, including ice-associated marine mammals and commercial fish stocks.” Lind, S., Ingvaldsen, R. B., & Furevik, T. (2018). Arctic warming hotspot in the northern Barents Sea linked to declining sea-ice import. Nature Climate Change, 8(7), 634–639. doi:10.1038/s41558-018-0205-y https://www.nature.com/articles/s41558-018-0205-y

How much will saltiness in regions such as the ESAS region change, what does it possibly means for the release potential of methane hydrates through permafrost degradation. How will Ocean currents adjust as we move forward in our climate experiment, and indeed there are some indicators, a 2018 study concluded,Warmer, saltier polar water could change global ocean currents.[9]

In the Antarctic, at depths between 500 and 2000 metres, a surprisingly warm salty water mass can be found, called Circumpolar Deep Water. At certain points under Antarctica, this warm water comes into contact with the underside of the ice shelves and melts the ice. If more warm salty water is reaching the bottom of the ice shelves than in previous years, this could fuel an increase in ice-shelf melt.[9]

With the premise that the water cycle will likely further speed up, increased rains could also play a leading role in transporting salt ions to the northern latitudes, then washed out via the extensive river systems up North. Arctic saline permafrost sediments generally increase with depth.[14]

How will the salinity waters change in the future, how the sea-surface freshing versus the deep water forming halocline with warmer salinity driven sub-surface water will play out? It also depends on Arctic water cycle changes, changes in Ocean currents, thaw of salt permafrost layers, projected increase of evaporation and precipitation regimes. Remote sensing data only can observe the Ocean surface, the buoy data available is sparse likely more so the deep water sampling.

Permafrost or submarine permafrost can be found in many parts at the poles (notice Antarctic permafrost is largely unexplored since covered by ice and more remote than the Arctic).

If you hear about methane concentrations in the atmosphere it usually mentions also the life time of this agent, however while generally understood, a 2019 study looked at saturation effects from for instance doubling of methane in the atmosphere,[11] and found:

We find that the CH4 lifetime increases quasilinearly with enhanced surface mixing ratios. This is ascribed to a strong reduction in OH, which is the main sink of CH4 in the troposphere. We conclude that the strong reduction in OH will also influence other radiatively active, air-quality-relevant and ozone-depleting substances in the troposphere. The radical OH is the most important atmospheric detergent and its reduction will enhance the residence time of these substances, as well as of CH4, and thereby increase the global radiative burden.

We emphasize that the applied doubling of present-day CH4 surface mixing ratios is not unrealistic as it is even part of the RCP 8.5 scenario. Considering further feedbacks with still uncertain quantitative consequences, it is indeed possible that the presented changes in the atmospheric chemistry will be faced by upcoming generations.[11]

Next I plan to create a video about this subject, and because YouTube demonetized our channel, and living from welfare atm, any support is appreciated. Videos are without ads. Donate for the creation of a video about Methane Hydrates (and get mentioned in the credits with your message to the world).