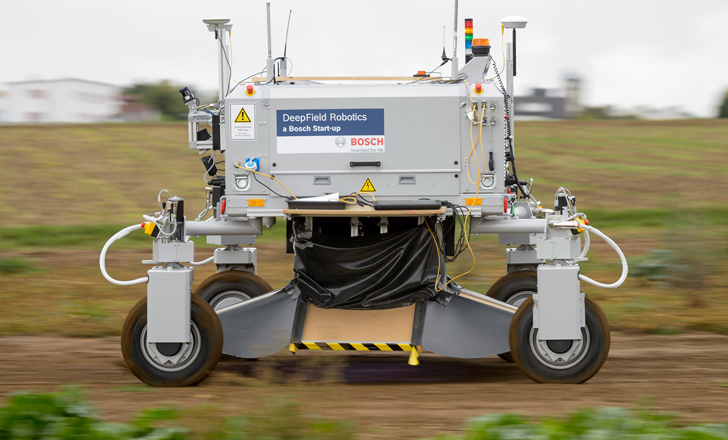 IEEE: The most organic and eco-friendly way of dealing with weeds is the old-fashioned way: physically removing them. “Physical removal” can mean pulling weeds out completely, but that involves both grasping the weed and doing something with it. A better solution is to just smash it way down into the ground, which is faster, easier, and something a robot can do excellently.

To keep global mean temperatures below dangerous thresholds (2C, 1.5C or even less), the world has to adopt carbon negative technologies, i.e. BECCS.

Agriculture robots and Drones to the Rescue

New technologies like agriculture robots can be modified to deal with unwanted weeds and at the same time deploy small chunks of biochar supplements, to harvest organic waste for biochar creation (through a process known as pyrolysis) . Drones could be used for remote regions and literally catapult biochar into the soil during systematic flyovers. This would also mean we wouldn’t need to built costly infrastructure to access far reaching points.

The various impacts of biochar can be dependent on the properties of the biochar, as well as the amount applied. Biochar impact may depend on regional conditions including soil type, soil condition (depleted or healthy), temperature, and humidity. Modest additions of biochar to soil reduce nitrous oxide N2O emissions by up to 80% and eliminate methane emissions, which are both more potent greenhouse gases than CO2.

Studies have reported positive effects from biochar on crop production in degraded and nutrient–poor soils. Biochar can be designed with specific qualities to target distinct properties of soils. Biochar reduces leaching of critical nutrients, creates a higher crop uptake of nutrients, and provides greater soil availability of nutrients. At 10% levels biochar reduced contaminant levels in plants by up to 80%, while reducing total chlordane and DDX content in the plants by 68 and 79%, respectively. On the other hand, because of its high adsorption capacity, biochar may reduce the efficacy of soil applied pesticides that are needed for weed and pest control.

EconoTimes: Zion Research has published a new report titled “Biochar (Pyrolysis, Gasification, Hydrothermal and Others Technology) Market for Agriculture, Water & Waste Water Treatment and Other Applications: Global Industry Perspective, Comprehensive Analysis and Forecast, 2014 – 2020” According to the report, the global biochar market was valued at approximately USD 260.0 million in 2014 and is expected to reach approximately USD 585.0 million by 2020, growing at a CAGR of around 14.5% between 2015 and 2020. In terms of volume, global biochar market stood at 100 kilo tons in 2014.

While there are good prospects for biochar in the future, new agriculture practises with autonomous machines, modified to deploy biochar could mean nothing less than a revolution of current agriculture businesses, and at the same time help to fight climate change.