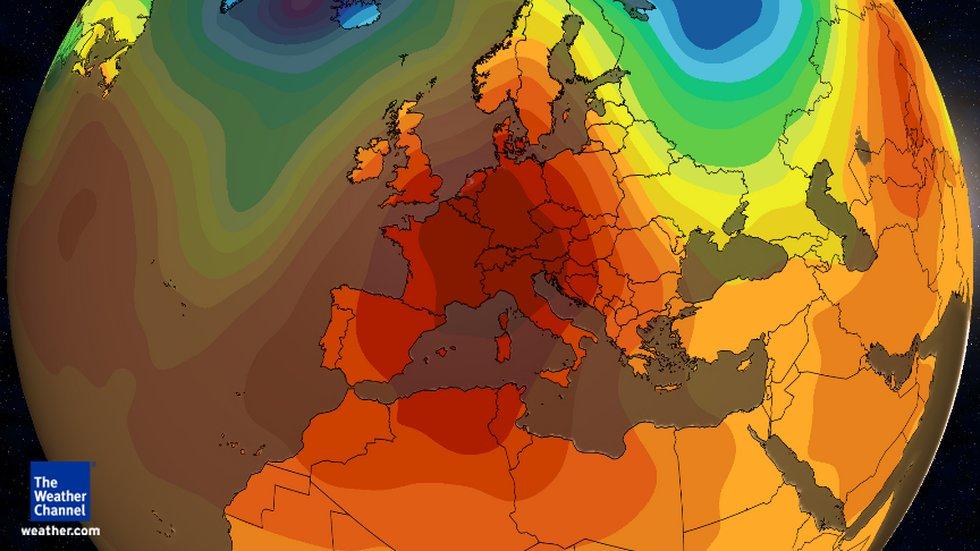 Here we look at the current weather configuration in the Northern Hemisphere, with the scope on the mild 2015 winter weather in what seems to affect many regions in northern latitudes this winter. The atmosphere in many northern regions like Canada (Northern America) or Europe is currently dominated by westerly jet stream winds. This configuration has been projected by computer models in October, and has been attributed – is driven by the El Nino phenomena of 2015, which ramped up to be the strongest El Nino since 1997-1998 or even to be the strongest on record (records began over sixty years ago in 1950).

Already in October NOAA’s Climate Prediction Center noted in their winter outlook, “Above-average temperatures most likely in the West and across the Northern Tier. This year’s El Niño, among the strongest on record, is expected to influence weather and climate patterns this winter by impacting the position of the Pacific jet stream.”

The MetOffice noted in their winter outlook from Oct 29, 2015: Most of the global drivers tend to increase the chances of westerly weather patterns during our November to January outlook period. Our numerical prediction model, being sensitive to these drivers, also predicts a higher-than-normal chance of westerly conditions. This results in an outlook for an increased chance of milder- and wetter-than-usual conditions, and a decreased chance of colder and drier conditions, for the UK. Our outlook also indicates an increase in the risk of windy or even stormy weather.

Now, Accuweather from Dec 6, 2015: “El Niño is contributing to a strong belt of westerly winds across Canada that will help keep the polar vortex strong but locked up near the Arctic Circle. An ongoing and strengthening El Niño may succeed in keeping arctic air out of much of the United States well into the winter. “We see impressive signals that the overall mild pattern that got rolling in the Central and Eastern states during October and November will hold through December and into January.

Most of Europe is already in the grips of exceptionally mild December weather pattern, and that is likely to continue in most areas through next week. In Europe’s case, however, it is an unusually strong northward bulge in the jet stream. According to the official French meteorological agency, Meteo-France, mild weather will persist throughout the week of Dec. 7-13, with “calm and rather dry weather in the south of the country, and a few rainy spells in the north.” The agency’s outlook for Dec. 14-27 calls for temperatures to “remain above seasonal normals nationwide.”

A vast zone of unusually mild air is already in place over Siberia, and by next week unusually warm weather is expected to expand farther south into the much more highly populated areas of East Asia, including parts of China, Japan and South Korea. Siberia, a vast and sparsely populated region of the Russian Federation, is home of some of the world’s coldest inhabited places. The current pattern is not so much a warm spell as it is a reprieve from the typically brutal winter cold of the region.

In the Russian city of Norilsk, which is north of the Arctic Circle and never sees the sun rise during the month of December, the temperature surged to 23 degrees above zero Fahrenheit (minus 5 Celsius) on Tuesday, Dec. 1. That’s much warmer than the average highs in December, which hover in the single digits below zero Fahrenheit (20s below zero Celsius).

As unusually warm air parks over Europe and Siberia, the large-scale circulation of the atmosphere may drive some of the chilly air typically seen in those regions southward into the Middle East and even parts of North Africa through next week.

Widespread snowfall will accompany this cold surge late this week through early next week across the mountains of the Caucasus (Georgia, Armenia, Azerbaijan) as well as Turkey, Iran and far northern Iraq. It may even be cold enough for a brief period of snow in the Iranian capital, Tehran. A much larger area will feel the cold air. Lows may drop below freezing in the deserts as far south as northern Saudi Arabia at times by early next week. In Baghdad, readings may drop close to the freezing mark at night.

This ‘global’ view of the temperature anomaly for November 7th illustrates just how far above normal temperatures were in both the eastern U.S. and Western Europe simultaneously. It was perhaps the warmest November day on record for France. Image from the Climate Change Institute, University of Maine.

Incredible November Warmth for Portions of the U.S., Europe and Beyond

The first 10 days of November 2015 have seen record-breaking warmth for many locations in Florida and elsewhere in U.S. while all-time November monthly national heat records have so far been broken in the U.K., Ireland, France, Estonia, Slovenia, and Finland. All-time record heat (for any month) was also observed in parts of Australia and French Guiana. Read a brief summary by Wunderground‘s Christopher C. Burt.

Europe November Record Heat Wave
Wunderground (Visit link for complete overview of global records): Amazing as the warmth in the U.S. may have been, it paled in comparison to the unprecedented warmth that has engulfed much of Europe since late October. All-time November national monthly heat records have been set in the United Kingdom with a 22.4°C (72.3°F) reading on November 1st at Trawsoed, Wales as well as in Ireland with a 20.1°C (68.2°F) temperature at Dooks, County Kerry also on November 1st. The previous November record for Ireland was 20.0°C (68.0•F) at Rathfarnham on November 4, 1946 and in the U.K. 21.7°C (71.1°F) at Prestatyn also on November 4, 1946. UPDATE: Apparently an all-time November high minimum temperature for the U.K. has just been set at Murlough, Northern Ireland the night of November 9-10 with a low of just 16.1°C (61.0°F). The previous November record high minimum was 15.9°C (59.4°F) at Eastbourne, East Sussex in November 2005.

Meanwhile in the Pacific Ocean, The Independent wrote that water temperatures risen above 3.1C average on November 18th. Compare this anomaly to the previous high of 2.8C, recorded during the 1997-1998 El Niño season. Professor Timmermann from the International Pacific Research Center explained that each cycle of El Niño had been gradually getting stronger in recent decades – more than in any period over the past four centuries.Though he noted that it was currently unclear whether this was due to climate change – but that the phenomenon was likely to become more frequent because of global warming over the course of the next century. The recent 100 year floods in Chennai India have been amplified by this years El Nino as well.

Selected anomalies for October 2015 from around the world (latest figures), tracked by NCDC/NOAA

“The state of the global climate in 2015 (PDF 3mb) will make history as for a number of reasons,” said WMO Secretary-General Michel Jarraud. “Levels of greenhouse gases in the atmosphere reached new highs and in the Northern hemisphere spring 2015 the three-month global average concentration of CO2 crossed the 400 parts per million barrier for the first time. 2015 is likely to be the hottest year on record, with ocean surface temperatures at the highest level since measurements began.  It is probable that the 1°C Celsius threshold will be crossed,” said Mr Jarraud. “This is all bad news for the planet.”

Greenhouse gas emissions, which are causing climate change, can be controlled. We have the knowledge and the tools to act. We have a choice. Future generations will not.”

Read the entire WMO article, which includes Highlights of 2015

November: Crops in Russia and Ukraine have been hurt by the dry start to this season, with Russian Agriculture Minister Alexander Tkachev saying a quarter of the country’s winter crops are in poor condition as planting nears completion.Crops in Russia, Ukraine Suffering Due to Dry Weather

Recent Heat Waves take Scientists by Surprise
July 4, 2021
Subscribe
0 Comments
Inline Feedbacks
View all comments
Go to Top
wpDiscuz
0
0
Would love your thoughts, please comment.x
()
x
| Reply
Cookie Consent
To provide the best experiences, we use technologies like cookies to store and/or access device information. Consenting to these technologies will allow us to process data such as browsing behavior or unique IDs on this site. Not consenting or withdrawing consent, may adversely affect certain features and functions. Learn more about the data usage on this website.
Manage options Manage services Manage vendors Read more about these purposes
View preferences
{title} {title} {title}
Loading Comments...