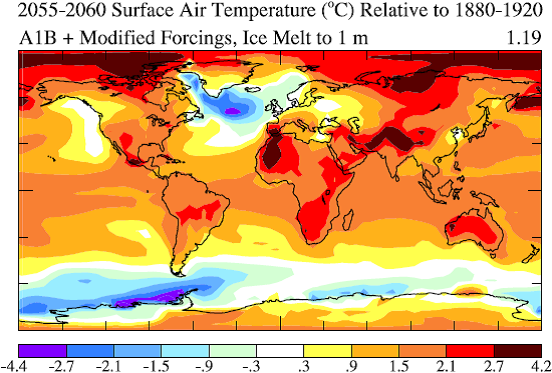 Recently, James Hansen the former director of NASA GISS published new study findings about future sea level rise, ice melt, and temperature changes, as well as the possible implications for future climate. Above video highlights a part of a talk Hansen held on December 1, 2015 at the Paris climate change conference (COP21). The take away here is that freshwater cooling of the upper ocean layer increases the temperature differences – the temperature gradient, to Earth middle latitudes (tropics), this increase is a known driver of increased wind speeds. Hence, with increased melt, increased freshwater runoff, we are in the process to create a situation which creates more powerful storms.

Our results at least imply that strong cooling in the North Atlantic from AMOC shutdown does create higher wind speed. The increment in seasonal mean wind speed of the northeasterlies relative to preindustrial conditions is as much as 10-20%. Such a percentage increase of wind speed in a storm translates into an increase of storm power dissipation by a factor ~1.4-2, because wind power dissipation is proportional to the cube of wind speed (Emanuel, 1987, 2005).

However, our simulated changes refer to seasonal mean winds averaged over large grid-boxes, not individual storms. A blocking high pressure system in the North Atlantic creating consistent strong northeasterly flow would provide wave action that may have contributed to the chevron ridge formation in the Bahamas and Bermuda. This blocking high pressure system could contribute to powerful storm impacts in another way. In combination with the warm tropical conditions that existed in the late Eemian (Cortijo et al., 1999), and are expected in the future if GHGs continue to increase, this blocking high pressure could create a preferred alley for tropical storm tracks.

We assumed, in discussing the relevance of these experiments to Eemian climate, that effects of freshwater injection dominate over changing GHG amount, as seems likely because of the large freshwater effect on SSTs and sea level pressure. However, Eemian CO2 was actually almost constant at ~275 ppm (Luthi et al., 2008). Thus, to isolate effects better, we now carry out simulations with fixed GHG amount, which helps clarify important feedback processes