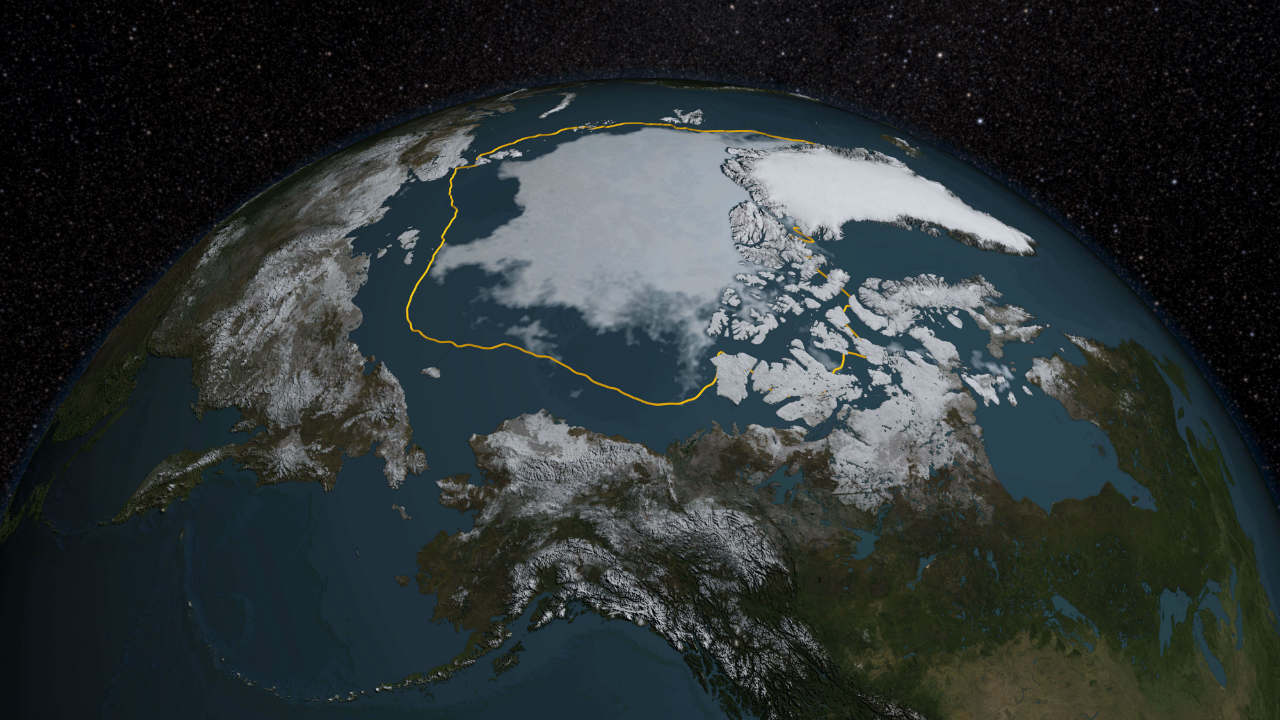 Arctic Sea Ice Summertime Minimum Is Fourth Lowest on Record
According to a NASA analysis of satellite data, the 2015 Arctic sea ice minimum extent is the fourth lowest on record since observations from space began.

Arctic sea ice cover, made of frozen seawater that floats on top of the ocean, helps regulate the planet’s temperature by reflecting solar energy back to space. The sea ice cap grows and shrinks cyclically with the seasons. Its minimum summertime extent, which occurs at the end of the melt season, has been decreasing since the late 1970s in response to warming temperatures.

In some recent years, low sea-ice minimum extent has been at least in part exacerbated by meteorological factors, but that was not the case this year.

“This year is the fourth lowest, and yet we haven’t seen any major weather event or persistent weather pattern in the Arctic this summer that helped push the extent lower as often happens,” said Walt Meier, a sea ice scientist with NASA’s Goddard Space Flight Center in Greenbelt, Maryland. “It was a bit warmer in some areas than last year, but it was cooler in other places, too.”

In contrast, the lowest year on record, 2012, saw a powerful August cyclone that fractured the ice cover, accelerating its decline.

The sea ice decline has accelerated since 1996. The 10 lowest minimum extents in the satellite record have occurred in the last 11 years. The 2014 minimum was 1.94 million square miles (5.03 million square kilometers), the seventh lowest on record. Although the 2015 minimum appears to have been reached, there is a chance that changing winds or late-season melt could reduce the Arctic extent even further in the next few days.

“The ice cover becomes less and less resilient, and it doesn’t take as much to melt it as it used to,” Meier said. “The sea ice cap, which used to be a solid sheet of ice, now is fragmented into smaller floes that are more exposed to warm ocean waters. In the past, Arctic sea ice was like a fortress. The ocean could only attack it from the sides. Now it’s like the invaders have tunneled in from underneath and the ice pack melts from within.”

Some analyses have hinted the Arctic’s multiyear sea ice, the oldest and thickest ice that survives the summer melt season, appeared to have recuperated partially after the 2012 record low. But according to Joey Comiso, a sea ice scientist at Goddard, the recovery flattened last winter and will likely reverse after this melt season.

“The thicker ice will likely continue to decline,” Comiso said. “There might be some recoveries during some years, especially when the winter is unusually cold, but it is expected to go down again because the surface temperature in the region continues to increase.”

This year, the Arctic sea ice cover experienced relatively slow rates of melt in June, which is the month the Arctic receives the most solar energy. However, the rate of ice loss picked up during July, when the sun is still strong. Faster than normal ice loss rates continued through August, a transition month when ice loss typically begins to slow. A big “hole” appeared in August in the ice pack in the Beaufort and Chukchi seas, north of Alaska, when thinner seasonal ice surrounded by thicker, older ice melted. The huge opening allowed for the ocean to absorb more solar energy, accelerating the melt.

It’s unclear whether this year’s strong El Niño event, which is a naturally occurring phenomenon that typically occurs every two to seven years where the surface water of the eastern equatorial Pacific Ocean warms, has had any impact on the Arctic sea ice minimum extent.

“Historically, the Arctic had a thicker, more rigid sea ice that covered more of the Arctic basin, so it was difficult to tell whether El Niño had any effect on it,” said Richard Cullather, a climate modeler at Goddard. “Although we haven’t been able to detect a strong El Niño impact on Arctic sea ice yet, now that the ice is thinner and more mobile, we should begin to see a larger response to atmospheric events from lower latitudes.”

In comparison, research has found a strong link between El Niño and the behavior of the sea ice cover around Antarctica. El Niño causes higher sea level pressure, warmer air temperature and warmer sea surface temperature in west Antarctica that affect sea ice distribution. This could explain why this year the growth of the Antarctic sea ice cover, which currently is headed toward its yearly maximum extent and was at much higher than normal levels throughout much of the first half of 2015, dipped below normal levels in mid-August.

Starting next week, NASA’s Operation IceBridge, an airborne survey of polar ice, will be carrying science flights over sea ice in the Arctic, to help validate satellite readings and provide insight into the impact of the summer melt season on land and sea ice.

NASA uses the vantage point of space to increase our understanding of our home planet, improve lives, and safeguard our future. NASA develops new ways to observe and study Earth’s interconnected natural systems with long-term data records. The agency freely shares this unique knowledge and works with institutions around the world to gain new insights into how our planet is changing.