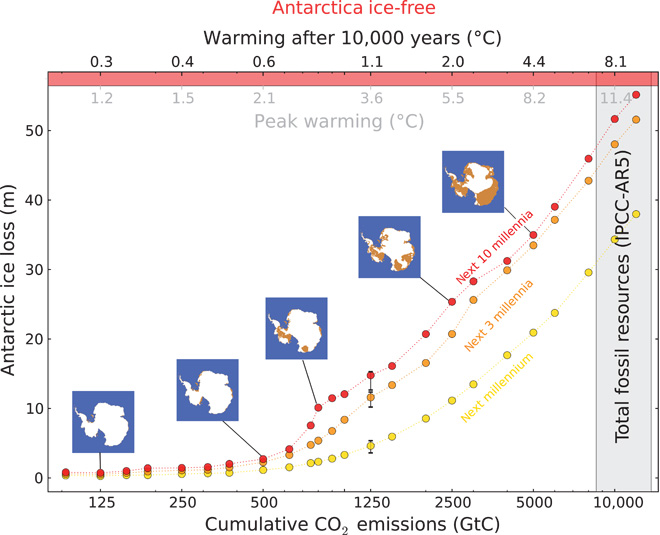 A new open access study in Science Advances concludes that a warming beyond the 2°C target would potentially lead to rates of sea-level rise dominated by ice loss from Antarctica, and continued CO2 emissions from fossil sources could cause additional tens of meters of sea level rise, over the next millennia and eventually ultimately eliminate the entire Antarctic ice sheet, causing about 58 meters of sea level rise.

The authors noted, Antarctica is projected to become almost ice-free with an average contribution to sea-level rise exceeding 3 m per century during the first millennium. Consistent with recent observations and simulations, the West Antarctic Ice Sheet becomes unstable with 600 to 800 GtC of additional carbon emissions. Beyond this additional carbon release, the destabilization of ice basins in both West and East Antarctica results in a threshold increase in global sea level. Unabated carbon emissions thus threaten the Antarctic Ice Sheet in its entirety with associated sea-level rise that far exceeds that of all other possible sources.

The fate of the Antarctic Ice Sheet is of primary importance for coastal populations worldwide, and even a single additional meter will make a huge impact when storm surges rise, thus flooding increases and salt water intrusion damages food production.

Several regions in Antarctica are subject to marine ice-sheet instability

Sea-level commitment from Antarctic ice loss. Given is the total sea-level change after 1000 years (yellow), 3000 years (orange), and 10,000 years (red) after year 2000 for each of the scenarios depicted in Fig. 1. The maximum temperature anomaly and the temperature anomaly after 10,000 years are given on the upper x axis. If all of the currently attainable carbon resources [estimated to be between 8500 and 13.600 GtC (4)] were burned, the Antarctic Ice Sheet would lose most of its mass, raising global sea level by more than 50 m. For the 125 GtC as well as the 500, 800, 2500, and 5000 GtC scenarios, the ice-covered area is depicted in white (ice-free bedrock in brown).

Continued warming can lead to increased ice loss from the Antarctic Ice Sheet or even cause its disintegration, potentially sped up by particular two self-reinforcing feedback mechanisms, the marine ice sheet instability and the surface elevation feedback.

Marine ice sheet instability occurs when sub-shelf melt rate is large enough to force the ice sheet grounding line to retreat into an area where the ice is grounded below sea level on an inward-sloping bedrock, then it can become unstable.

Because of warm water intrusion into the shelf cavities in the Amundsen Basin of West Antarctica the grounding line there may already retreated into an unstable regime. A similar topographic configuration can be found in the Wilkes Basin, the largest marine-based drainage basin in East Antarctica.

In our simulations, the Wilkes grounding line retreats significantly under fossil fuel carbon emissions of 1000 GtC or more. At this stage, corresponding to a peak warming of 2° to 3°C, both the West Antarctic Ice Sheet and the Wilkes Basin are experiencing rapid ice loss due to their instability, which manifests itself in a visible threshold in sea-level rise (see Image). Other marine-based drainage systems become unstable under higher emission scenarios, until most of the marine ice is eventually lost to the self-reinforcing feedback after about 2500 GtC of cumulative carbon release

Though, the interaction of all these processes is still insufficiently understood so that evolution of the Antarctic Ice Sheet remains unclear, particularly in the long run. A high emission scenario shows increase of sea level rise for the next century, while in the low emissions simulation higher moisture holding capacity of the warmer air surrounding the Antarctic Ice Sheet leads to a snowfall increase, offsetting ice mass loss.