Over 500 dead across India as heat wave sets in, Telangana’s Khammam sizzles at 48 degrees 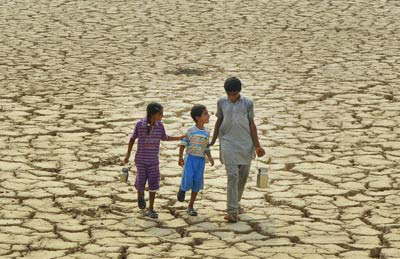 Hindustan Times: Humans “boil in their own skin” at 48 degrees Celsius, the maximum temperature recorded at Khammam in Telangana which has become the focal point of a blistering heat wave sweeping through swathes of India on Sunday, killing nearly 500 people.

Allahabad was the second hottest at 47.7°C, six degrees above normal; Nandigama in Andhra Pradesh was a notch under as it sizzled at 47°C while Odisha’s Angul district tipped the scales at 46.7°C.

Medical experts said long exposure to extreme heat raises human body temperature to such levels that protein cells start to “boil like egg whites”, a case of internal combustion that eventually shuts down the brain.

Hospitals have been flooded with cases of heatstroke in Gurgaon and Delhi. “Prolonged sun exposure dehydrates the body and its ability to control heat. So, we advise people to be extra cautious in the summer months,” said Satish Koul, general physician at Columbia Asia Hospital, Gurgaon.

Tummy upsets, headache, fever, rashes and skin allergies from sunburn are other less severe symptoms. “Drink plenty of water, avoid the sun and never go out on an empty stomach,” reads the general advisory.

The study Extreme Weather Events over India in the last 100 years (2005), found:

Related
31 May 2015 The heat and the death toll are rising in India. Is this a glimpse of Earth’s future?

24 May 2015 Historic flooding in Texas, Oklahoma area http://abcnews.go.com/US/killed-homes-underwater-flooding-wreaks-havoc-texas-oklahoma/story?id=31266852 and http://edition.cnn.com/2015/05/24/us/severe-weather/

Inaccurate – temperatures can go higher than 48°