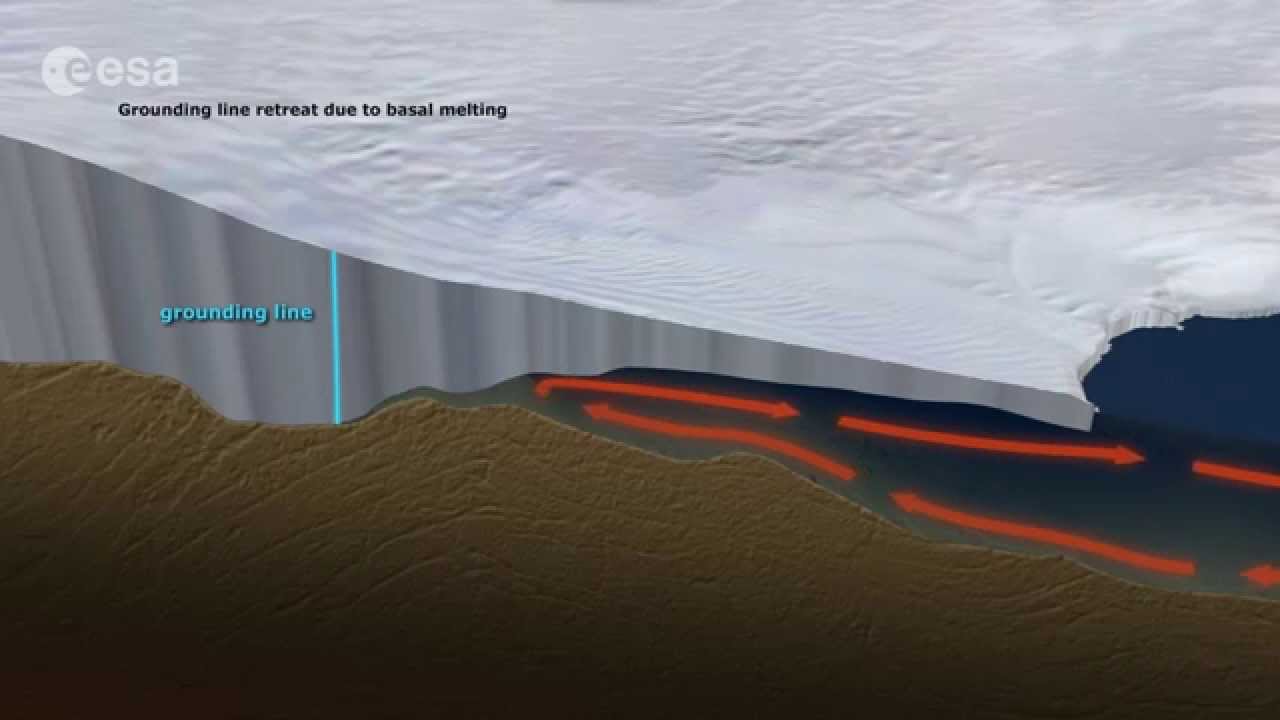 ESA posted an update on Antarctic ice loss on 22 May 2015. Above animation shows how warm ocean water penetrates the glacier grounding line through basalt melt, threatening speed up of glaciers, discharged into the ocean.

A recent acceleration in ice loss in a previously stable region of Antarctica has been detected by ESA’s ice mission.

The latest findings by a team of scientists from the UK’s University of Bristol show that with no sign of warning, multiple glaciers along the Southern Antarctic Peninsula suddenly started to shed ice into the ocean starting in 2009 at rate of about 60 cubic km each year.

This makes the region one of the largest contributors to sea-level rise in Antarctica, having added about 300 cubic km of water into the ocean in the past six years. Some glaciers along the coastal expanse are currently lowering by as much as four m each year.

“The fact that so many glaciers in such a large region suddenly started to lose ice came as a surprise to us. It shows a very fast response of the ice sheet: in just a few years the dynamic regime completely shifted. It appears that sometime around 2009, the ice-shelf thinning and the subsurface melting of the glaciers passed a critical threshold that triggered the sudden ice loss,” said Dr Bert Wouters from the University of Bristol, who led the study.

Prior to 2009, the 750 km-long Southern Antarctic Peninsula showed no signs of change.

“However, compared to other regions in Antarctica, the Southern Peninsula is rather understudied, exactly because it did not show any changes in the past, ironically.”

But the westerly winds that encircle Antarctica have become more vigorous in recent decades, in response to climate warming and ozone depletion. The stronger winds push warm waters from the Southern Ocean toward the poles, where they eat away at the glaciers and floating ice shelves from below.

Ice shelves in the region have lost almost one fifth of their thickness in the last two decades, thereby reducing the resisting force on the glaciers. A key concern is that much of the ice of the Southern Antarctic Peninsula is grounded on bedrock below sea level, which gets deeper inland. This means that even if the glaciers retreat, the warm water will chase them inland and melt them even more.

“To pinpoint the cause of the changes, more data need to be collected. A detailed knowledge of geometry of the local ice shelves, the ocean floor topography, ice sheet thickness and glacier flow speeds are crucial to tell how much longer the thinning will continue,” said Dr Wouters.

Read the entire article from ESA.