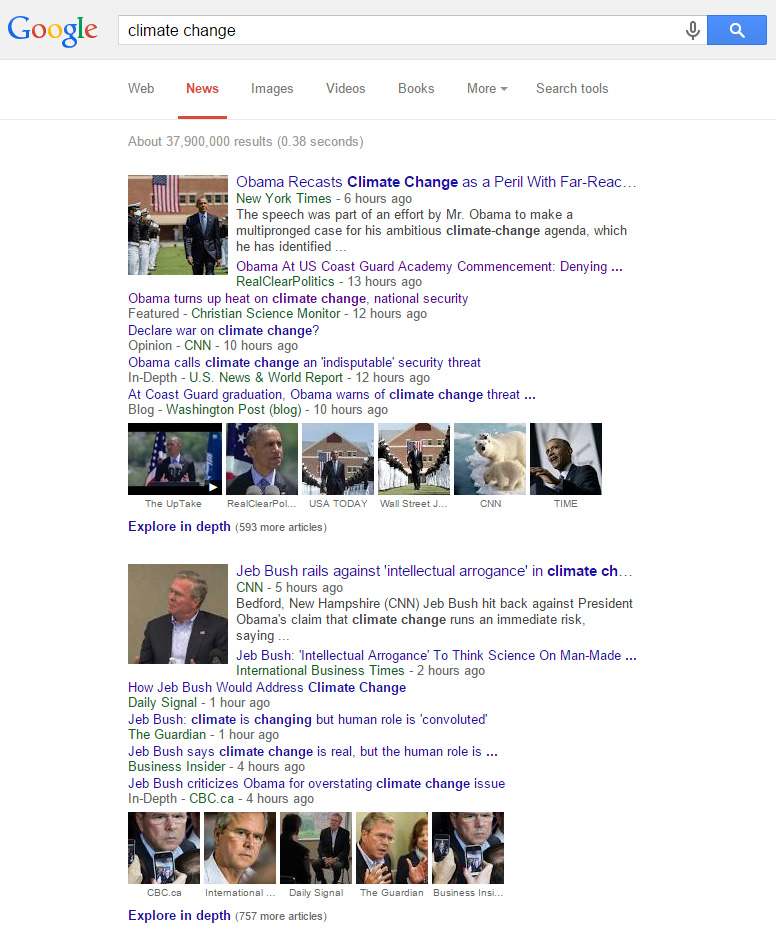 Yesterday Obama delivered a historic speech about national security and climate change, at a US coast guard academy. Additionally the White House released a report, which summed up the conclusions from security experts on climate change.

Today, if you go to Google News and type in “climate change”, you get something like below picture, 593 media articles on Obama’s speech, but then 757 articles about Jeb Bush’s remarks, how he claims the science is not settled about climate change.

Thus, the media is covering denial of the science more, and this may delay important climate actions. What could possibly go wrong, when denying the science and the warnings of the security experts?

The result could mean that cities become vulnerable to sea level rise, from threats such as possible flooding of coastal nuclear power plants, or sea level rise of several meters.

Climate actions are required to slow global warming, and to prevent the worst case scenarios of climate change, because of the slow inertia of ice sheets or permafrost thaw.

Meanwhile an article from CNN suggested to declare war on climate change.

Michael Mann on CNN Talking About SCOTUS decision Undermining EPA Climate Policies
July 5, 2022
Subscribe
0 Comments
Inline Feedbacks
View all comments
Go to Top
wpDiscuz
0
0
Would love your thoughts, please comment.x
()
x
| Reply
Cookie Consent
To provide the best experiences, we use technologies like cookies to store and/or access device information. Consenting to these technologies will allow us to process data such as browsing behavior or unique IDs on this site. Not consenting or withdrawing consent, may adversely affect certain features and functions. Learn more about the data usage on this website.
Manage options Manage services Manage vendors Read more about these purposes
View preferences
{title} {title} {title}
Loading Comments...