You are here:
2015Climate ChangeClimate WikiCommunicationDenial 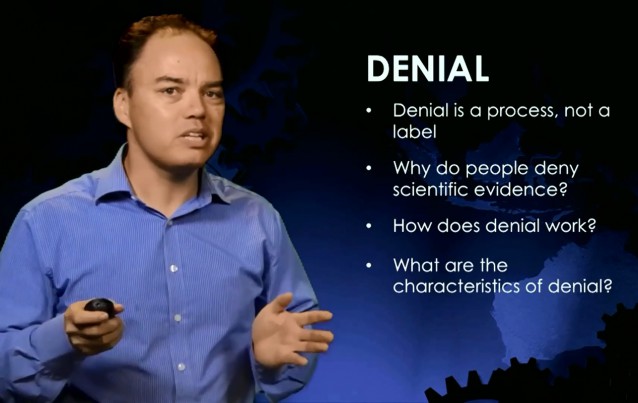 What’s the best way to show a climate change denier the error of their ways? A new online course answers this question for the masses.

Hint: it’s not lobbing an endless stream of scientific evidence that proves human-driven climate change. While this approach may be cathartic, telling those who refuse to accept climate science for political, cultural, or ideological reasons over and over that they’re wrong is ineffective at best, and oftentimes counterproductive.

He says you can’t adequately address the issue of climate change denial “without considering the root cause: personal beliefs and ideology driving the rejection of scientific evidence. Attempts at science communication that ignore the potent influence effect of worldview can be futile or even counterproductive.”

So what is the best response?

According to Cook, the answer can be found in “inoculation theory,” a branch of psychology in which misinformation is neutralized by “explaining the fallacy employed by the myth.”

“Once people understand the techniques used to distort the science, they can reconcile the myth with the fact,” writes Cook. Instead of more science, what will help stem the spread of climate denial is debunking misconceptions about the science, an approach that “results in significantly higher learning gains than customary lectures that simply teach the science,” according to Cook.

There is now an online course by John Cook about the 101 of climate denial and how to communicate better. Visit the course.

George Marshall had this to add, about basic messaging of climate change