With further Arctic Amplification, How fast will Greenhouse Gas emissions accelerate in the Arctic Circle? 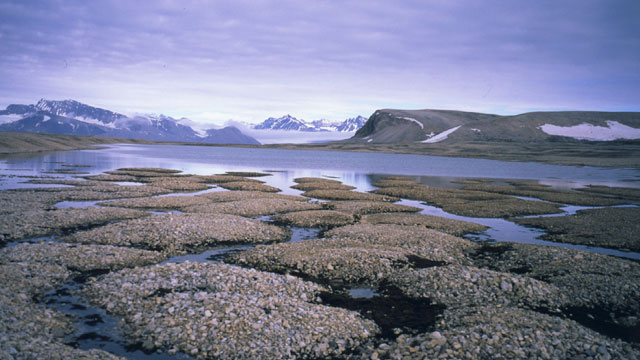 The following studies explore the release of CH4 emissions in the Arctic region.

Overall, the δ13CDIC values confirm recent suggestions of substantial degradation of OCter over the ESAS, and further show that a large part of the CO2 produced from degradation has been outgassed to the atmosphere. Source

The degradation of submarine permafrost and the destruction of hydrates on the shelf of east arctic seas as a potential cause of the “Methane Catastrophe”: some results of integrated studies in 2011
On the basis of the analysis of published data and in the course of the authors’ long-term geochemical and acoustic surveys performed in 1995–2011 on the East Siberian shelf (ESS) and aimed to research the role of the Arctic shelf in the processes of massive methane outbursts into the Earth’s atmosphere, some crucially new results were obtained. A number of hypotheses were proposed concerning the qualitative and quantitative characterization of the scale of this phenomenon. The ESS is a powerful supplier of methane to the atmosphere owing to the continued degradation of the submarine permafrost, which causes the destruction of gas hydrates. The emission of methane in several areas of the ESS is massive to the extent that growth in the methane concentrations in the atmosphere to values capable of causing a considerable and even catastrophic warning on the Earth is possible. The seismic data were compared to those of the drilling from ice performed first by the authors in 2011 in the southeastern part of the Laptev Sea to a depth of 65 m from the ice surface. This made it possible to reveal some new factors explaining the observed massive methane bursts out of the bottom sediments.(Ref 1.2)

The following studies explore the release of CO2 emissions in the Arctic region.

– Coastal Yedoma is likely more vulnerable towards carbon release than other permafrost bodies as it is not only subject to thermal collapse from above but also to enhanced wave and wind erosion of the Yedoma-dominated coast brought on by sea-level rise and longer ice-free seasons”, explains Örjan Gustafsson, professor of biogeochemistry at the Department of Applied Environmental Science and the Bert Bolin Centre for Climate Research.

The carbon-rich Ice-Complex permafrost structures (Yedoma) – rising along this Arctic coast are relict soils from the latest Ice Age, covering ~1 million km2 (twice the area of Sweden). While satellite images reveal 1000s of kilometers of muddy-turbid waters along the Arctic coast, the Yedoma has remained understudied largely due to the region’s inaccessibility.

Detailed chemical characterization of thaw-eroding Yedoma slopes of a disappearing island in SE Laptev Sea suggested rapid conversion of the old soils to carbon dioxide even before being washed into the sea. The compositional fingerprint of old organic carbon ( 7,000 to 10,000 years) found in marine bottom sediments revealed that erosional input from ancient coastal Yedoma was the dominant source of carbon, overwhelming input from marine sources and river-carried debris from inland vegetation and soils, on this, the World’s largest coastal shelf sea.

While the present rate of carbon release from the NE Siberian coast is not substantially affecting the CO2 levels in the global atmosphere, the study demonstrates that the process is firmly underway.

This study adds to previous reports on extensive methane releases from collapsing subsea permafrost on the East Siberian Arctic Shelf (ESAS) published by the team. In order to project the future trajectory of greenhouse gases in the atmosphere, it is important to study the interaction of a warming climate and releases from the enormous carbon pools held in coastal and subsea permafrost, as well as in methane hydrates, on the ESAS. Source

Thermal collapse and erosion of old permafrost masses along the 20–30 m steep and desolate Arctic coastline is an impressive phenomenon. credit: Igor Semiletov

The East Siberian Arctic Ocean (ESAO) is our focus area since it is experiencing the fastest rate of climate warming and holds vast stores of potentially vulnerable carbon. The severely understudied ESAO system hosts 80% of the World’s subsea permafrost, receives massive amounts of thawed old permafrost carbon from land with a poorly constrained fate in the marine system and, finally, also holds large deposits of CH4 in unknown proportions as hydrates and free gas, just below the subsea permafrost. There is thus a potential for – partly climate-induced – mobilization of these carbon pools into the atmosphere in form of CO2 and CH4.