Let’s Put a Price on Carbon with Fee and Dividend

You are here:
2014Carbon TaxEnergyPolicy 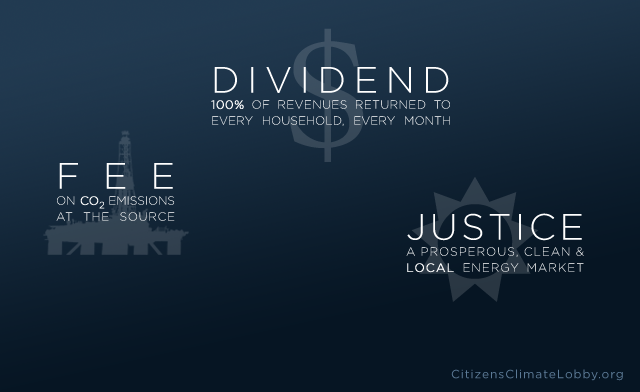 By Rolly Montpellier (Boomer Warrior): The science is settled. Our planet is heating up, and carbon pollution from Dirty Energy is to blame. The fossil fuel industry burns oil, coal and gas, sending heat-trapping emissions into the air.

Ninety million tons of carbon pollution enters the atmosphere every day. That means a hotter world for all of us.

It’s Time to Put a Price on Carbon

Nine of the ten hottest years on record were in the past twelve years. Carbon pollution also leads to Extreme Weather – violent rainstorms, prolonged droughts, hurricanes – as well as unprecedented Arctic ice melt, wildfires and severe flooding everywhere on the planet. Climate change is already happening, and it has entered our daily lives. We are all paying the price of carbon pollution – higher food prices, water scarcity, property damage, loss of wildlife, higher insurance premiums, lower crop yields, ecological damage.

The United States is second only to China as the leading emitter of CO2 on the planet. Canada is one of the world’s leading per capita sources of atmospheric greenhouse gases. North Americans must take decisive steps now to reduce their emissions through a comprehensive energy strategy and encourage other nations to follow. An essential component of such a strategy is the introduction of a transparent and effective carbon pricing mechanism.

There are at least five ways to put a price on carbon. The most transparent carbon pricing instrument is the Carbon Fee and Dividend promoted by the Citizens’ Climate Lobby. The carbon fee is a straightforward fee. It is easily explainable and understandable. It requires no time to set up; it’s easy to monitor and it requires no additional bureaucracy.

The federal government would charge a Carbon Fee on fossil fuels where they first enter the economy as a way to stimulate the transition away from fossil fuel dependence and towards clean energy alternatives. A direct and steadily-increasing carbon fee will accelerate this transition by erasing fossil fuels’ artificial price advantage over energy efficiency and low-carbon energy.

The Carbon Fee and Dividend is a revenue-neutral price on carbon.  All of the money collected would be returned to Canadians on an equitable basis. The fee increases steadily each year so that clean energy is cheaper than fossil fuels within a decade.

Data compiled by the Citizens’ Climate Lobby shows that (in Canada) under this plan,  66% percent of Canadian households would break even or receive more in their dividend cheque than they would pay for the increased cost of energy, thereby protecting the poor and middle class.

A predictably increasing carbon price will send a clear market signal which will unleash entrepreneurs and investors in the new clean-energy economy.

Sweden imposed a price on carbon in 1990 that is now 100 Euros per ton – a significantly hefty price. Since 1990, Sweden has reduced emissions while GDP has risen 36%, demonstrating that a substantial fee is effective in reducing emissions without harming the economy. From the David Suzuki Foundation Newsletter:

Although some critics claim a carbon tax would damage the economy, Sweden’s carbon tax is a hefty $140 per tonne of carbon pollution. Since the carbon tax was introduced, Sweden’s economy has grown by more than 100 per cent, and the country recently ranked fourth in the world on economic competitiveness.

More than five years ago, British Columbia implemented a carbon tax shift, and the outcome has so far been good both for the environment and the economy. British Columbians emitted 9.9% less greenhouse gases in 2010 than when the tax started, compared with 5% fewer emissions for the rest of Canada. BC’s GDP growth actually outpaced the rest of Canada’s after the tax was imposed. This is in line with evidence from seven other countries with similar policies that have had neutral or slightly positive effects on GDP.

Tell your friends, tell your neighbors, tell your leaders. It’s time to have the carbon conversation.It’s time for Canada and the United States to put a price on carbon and begin the shift to a low-carbon economy.