The cost of living in the Anthropocene 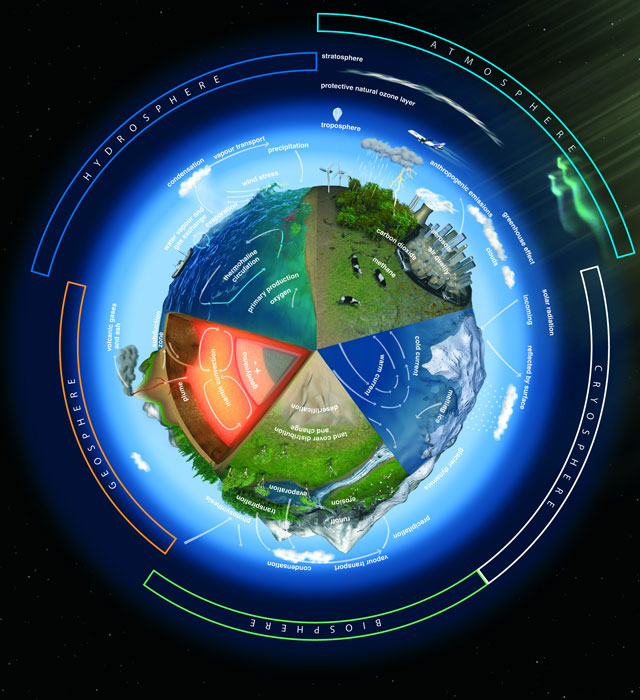 What are the true cost of living in the Anthropocene?

Wikipedia: The Anthropocene is an informal geologic chronological term that serves to mark the evidence and extent of human activities that have had a significant global impact on the Earth‘s ecosystems. The term was coined recently by ecologist Eugene F. Stoermer and has been widely popularized by the Nobel Prize-winning atmospheric chemist, Paul Crutzen, who regards the influence of human behavior on the Earth’s atmosphere in recent centuries as so significant as to constitute a new geological epoch for its lithosphere.

A new study published in Earth Perspectives, “The cost of living in the Anthropocene” by Professor Michael Gillings and Elizabeth Hagan-Lawson urges now for more interdisciplinary examinations, to ensure human welfare is maintained in the face of a less predictable planet.

The authors told Phys.org: “The terms ‘ecology’ and ‘economics’ both use the same Greek root as a prefix, with ‘oikos’ meaning home,” says Hagan-Lawson. “When we examined models across both fields for counting the cost of the Anthropocene, we found it surprising that there has not been more cross-disciplinary work between the two fields.”

The authors identified tipping points that constraint the planetary boundaries and define the Anthropocene:

The study “The cost of living in the Anthropocene” is open for access  and concludes:

Humans are having significant effects at a global scale, and the magnitude of these effects is sufficient to suggest we are entering a new geological epoch, the Anthropocene. This new epoch will be characterized by a shift away from the stable conditions that have typified the last 10,000 years, and usher in a period of unpredictability that threatens to destabilise human economics and society. It is clear that the comparative stability that has typified the last 10,000 years will not continue into this century, and that we face a future where business as usual will not be possible.

Attempting to estimate the absolute costs of living in the Anthropocene is difficult, largely because the potential magnitude of environmental effects are hard to quantify, as are the flow-on costs of unpredictability in weather, nutrient cycling and ecosystem services. Here we have dealt with these potential costs via the framework of the planetary boundaries defined by Rockstrom et al.(Rockstrom et al. 2009b), however this framework does not encompass all the costs inherent in the transition to the Anthropocene. For instance, the contributions of cultural heritage such as landscape aesthetics, the cultural significance of particular sites, or the intrinsic value of outdoor recreation are not well integrated into analyses of ecosystem services (Daniel et al. 2012). A number of groups are actively working to incorporate such values into ecosystem assessments (Tengberg et al. 2012; Chan et al. 2012).

The terms ‘ecology’ and ‘economics’ both use the same Greek root as a prefix (oikos?=?home), and it is surprising that there has not been more cross-disciplinary work between the two fields. Indeed, the value of ecosystem services, essential for human welfare, was not estimated until 1997 (Costanza and Déarge 1997). The value of such services was placed in the range of US$16-54 trillion dollars, most of which lay outside the market. By comparison, at that time the global gross national product was US$18 trillion.

Since 1997, there has been more attention paid to valuing the world’s natural capital, and examining the trade-offs between human welfare and the environment (Farber et al. 2002; Fisher et al. 2011). Particular attention has been paid to biodiversity and conservation (Naidoo et al.2008), and the costs associated with loss of forest ecosystem services (Chiabai et al. 2011). There has also been critical analysis of the interactions between ecosystem services, policy and economics, and linking these to the costs of human activities (Balmford et al. 2011; Farley 2012; Kinzig et al. 2011). It is clear that much more attention needs to be paid to the real costs resulting from human exploitation of natural resources, and this in turn will require closer collaboration between environmental scientists and economists. Finally, while science can inform and predict, its practitioners will increasingly have to deal with the more difficult issues of value, amenity and ethics (Seidl et al. 2013).

Dealing with the instability and environmental consequences of the Anthropocene will require cooperation and coordination between scientists, policy makers, governments and the general public. However, governance is required at time scales beyond past experience, because the earth systems we are affecting operate at a time scale that is mismatched with human decision making and our economic systems (Steffen et al. 2007). The time lag between cause and effect for complex earth systems mean that likely effects are already mortgaged into the future, and preventing the causes now will not stop the changes that are already in train (Steffen et al.2011a). Nevertheless, whole society and global responses are needed to prevent even more catastrophic changes to earth systems. Such responses must include population control, greatly reduced consumption of resources, sustainable energy generation, conservation of the natural world and generally better management of all human activities. These actions are essential if we are to maintain human welfare on a less predictable planet (Tickell 2011).

Effective management of earth systems will require changes to both national and international organizations (Biermann et al. 2012), and to aid this process an Earth System Governance Project has been proposed (Biermann et al. 2010). Clearly, adaptive responses have to be examined at local, regional and global scales, and further, because the concept of planetary boundaries crosses environmental, social and economic systems, communication between different fields must be improved, to adequately represent each discipline’s perspectives (Nilsson and Persson 2012; Veldkamp et al. 2011). The Anthropocene concept offers the ripe opportunity, and indeed, the necessity, for truly transdisciplinary research that transcends sociology, politics, economics and environmental science (Seidl et al. 2013; Hoban and Vernesi 2012; Palsson et al. 2013). The planetary boundaries central to the Anthropocene concept imply social tipping points that accompany the planetary tipping points, creating a research opportunity for fusing the work of those interested in politics, governance, human psychology and ecology (Biermann 2012). The true economic costs of the Anthropocene are yet to be properly quantified for any one of the planetary boundaries, and this is also an area that needs immediate attention from diverse research standpoints. Finally, solutions based on geoengineering rather than attitudinal and social change need to be examined in terms of their ecological, social and economic cost (Galaz 2012).

Many human civilizations have collapsed in the past, usually due to complex combinations of environmental, social and economic factors (Butzer and Endfield 2012; Diamond 1994). However, modern society has the advantage of hindsight, and knows the kinds of disasters that have overtaken previously successful civilizations. We owe it to future generations to not repeat the mistakes made in the past (Lawson 2011), and to invest in the future of our planet now, rather than pay a higher price later. Acceptance of the risks we face is a significant hurdle to overcome, since individuals and institutions are in a state of collective cognitive dissonance (Steffen et al.2011a), where unpalatable facts are actively ignored, or worse, distorted and ridiculed. The folly of using growth as a measure of success needs to be more widely appreciated, since continuous growth in human activity is inimical to the natural processes upon which human welfare depends (Kosoy et al. 2012). Current policies tend to ignore intangible and long-term costs, including those of environmental degradation. Unless we consider the true costs of consumption by placing real values on natural capital, we run the unacceptable risk of squandering our inheritance.