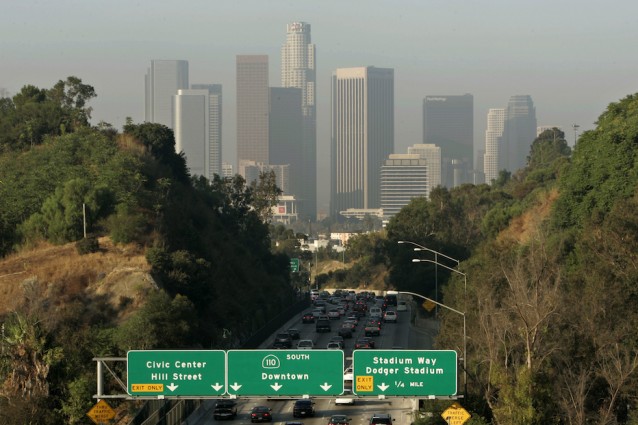 By JEFF SPROSS (ClimateProgress): A new study has just added to the case that fossil fuel pollution helps drive up cardiovascular disease.

Burning fuels like coal and gasoline doesn’t just give off carbon dioxide. It also releases a cocktail of other pollutants — especially sulfur dioxides and various types of nitrous oxides, all key ingredients in the smog that sits in the atmosphere over highly polluted cities like Los Angeles or Beijing. There’s also been a long-demonstrated statistical link between that pollution and cardiovascular problems like heart disease.

Now a new study out of the University of Washington Medical Center in Seattle, and published in the American Journal of Respiratory and Critical Care Medicine, may help describe just how that link works.

The researchers looked at 3,896 patients and their exposure to nitrogen dioxide specifically,which gets released when power plants burn coal or a car burns gasoline. After estimating the outdoor exposure over the preceding year, they ran the patients through an MRI scanner to get a look at their heart. The researchers found that increased exposure to nitrogen dioxide went along with a roughly 5 percent increase in the mass of the heart’s right ventricle, as well as changes in the blood flow through the ventricle.

“Although the link between traffic-related air pollution and left ventricular hypertrophy, heart failure, and cardiovascular death is established, the effects of traffic-related air pollution on the right ventricle have not been well studied,” said Peter Leary, the study’s lead author. “Greater right ventricular mass is also associated with increased risk for heart failure and cardiovascular death.”

When the Environmental Protection Agency first started cracking down on fossil fuel pollution in the 1970s, one of the most unexpected discoveries was the big increase in Americans’ health that accompanied the rules. One EPA study showed that by cutting down on sulfur dioxides, nitrous oxides, and particulate matter, environmental regulations prevented 130,000 heart attacks, 86,000 hospital visits, 160,000 premature deaths in 2010 alone.

All that avoided illness, in turn, lead to 13 million additional work days and 3.2 million additional school days. It also freed up a lot money that would’ve gone to medical treatment, and instead allowed to be spent on other pursuits.

That all adds up to a healthier economy. Government analyses consistently show that the economic benefits of government regulations outweigh their costs by a wide margin — and most of those benefits are thanks to environmental regulation of pollution.

It’s become routine for business interests and opponents of regulations to warn that jobs will be destroyed whenever the government decides to beef up its regulations of car emissionsand other forms of pollution. But that economic damage consistently fails to materialize, and the unseen health benefits of reducing pollution are a big reason why.