You are here:
ChinaDroughtExtreme Weather 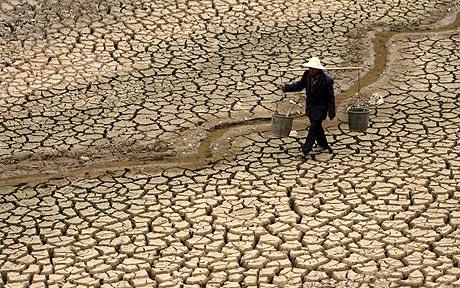 Published on Jan 13, 2014: Lately there’s been a lot of talk about Chinese air pollution; smog so thick, you can barely see the streets of Beijing. But what you might not know is that China is facing a major water crisis. Rivers are drying up and there’s not enough water to go around. And what little water there is has been so polluted by chemical and industrial run off, it’s undrinkable. And if the Three Gorges Dam didn’t cause enough trouble, the next great public work sure will. It’s called The South-North Diversion Project, and will link up the Yellow River with the Yangtze River, hopefully funneling water from the south to the water starved North. All it takes is drilling through the Himalayas.

Reuters: Severe pollution in Beijing has made the Chinese capital “barely suitable” for living, according to an official Chinese report, as the world’s second-largest economy tries to reduce often hazardous levels of smog caused by decades of rapid growth.

Pollution is a rising concern for China’s stability-obsessed leaders, keen to douse potential unrest as affluent city dwellers turn against a growth-at-all-costs economic model that has tainted much of the country’s air, water and soil. The report, by the Beijing-based Social Science Academic Press and the Shanghai Academy of Social Sciences, ranked the Chinese capital second worst out of 40 global cities for its environmental conditions, official media reported on Thursday.

China’s smog has brought some Chinese cities to a near standstill, caused flight delays and forced schools to shut.

China’s Plan to Clean Up Air in Cities Will Doom the Climate, Scientists Say

believed or not, china deserved for these situation.

To say it brief…China is screwed: the state faces its own internal
deconstruction and collapse at this rate from beyond poor choices that will
cause more destruction than that caused by both Imperial Japan and the
Mongols during their invasions COMBINED.

*Water Is A Basic Need*

No wonder they invest so much in Canada, we got the largest supply of fresh
water that everyone wants.

Anyway, China’s situation is less sustainable than the water consumption in
U.S. states like Florida. It won’t be long until their growing industries
causes devastating amounts of internal strife and the country plunges into
civil war. (assuming one does not start up with India, Nepal, Bangladesh
and other affected countries in South East Asia that rely on the glaciers
from the Himalayas.

That’s what Communism gets you

It is a shame really. If China can afford to – and feels the need to –
invest what is a truly staggering amount of money in the canal project,
then the advances that they could make in de-salination would be amazing.
After that, the solution could probably be franchised with Chinese plants
de-salinating water cheaply for so many other countries. This would be at
least some return for the investment, and it would be in cold hard foreign
currency.

All right, now I know why chinese don’t wash themselves very much, there’s
a reason. Luckly, their smell isn’t strong like ours and this is a bless in
the Shanghai’s subway. Oh shit, I just noticed that two years in China made
me a racist like them! Whatever, chinese people are good guys, except for
all that makes them so stupid and corrupted. The communist party, indeed.

CCP does not care about his or her people only party. Chinese can die but
not a party CCP wants to rule the China as long as they want and CCP is
also rule everything” Disastrous.”

Simple, We should bomb China or go to war IF they dont comply with New
Regulations.

A very nice treatment of the fallacies of central management of resources.
The incentive structures and logical limitations are commensurate to scale
rather than intention.

why don’t the china people rise up and fight…..or wait, they’re to weak
from no water or air…..

Depends. Some people love China, others don’t. Personally, I haven’t been there in 30+ years. Maybe it’s better now. Don’t know. But the last time I was there it was a shit hole. Beggars and pickpockets everywhere, government officials harassing you for bribes, unscrupulous drivers taking you for a ride and overcharging, and of course, endless government bureaucracy. Has anything changed, then? Let me know. Some have said that Chris’ videos give a negative view of China. I happen to enjoy them because he exposes the corruption and hypocrisy that is rampant in the country. I already HAVE a negative… Read more »

Stop drinking China’s water, the poor elite members of the CCP can’t fill
their many pools in their mansions. I bet collecting rain water isn’t an
option with the air pollution, it becomes undrinkable before it hits the
ground!

Why haven’t you done a video on the massive fire that burnt down a huge
amount of shangri-la that was started in a newly built hotel and when the
firefighters didn’t come and a local man opened a fire hydrant there was no
water because the CCP turned them off!

society fools following stupid things without thinking are the cause of
this and many of you people watching this video dont even see anything
wrong but if you’re living a blind existence following what people you dont
even know tell you to do , buying tons of useless stuff and selling youre
whole freedom and life time to get money than youre as much skum as the
government is .. basically youre not even alive.. youre just a useless
follower.

They say the CCP stays in power because they feed the people. If studying
the Third Reich has taught me anything, people fear uncertainty, and
because the CCP provides security from this, they stay in power. I fear
what the CCP will do with their backs to the wall, especially with regards
to Japan. Vietnam? Money on Vietnam, remember the Sino-Veitamese War of
1980 (I think that’s the year…)

India has sanitation and water problems just like China. India fighting
over water, and some rivers don’t even make it to the ocean anymore.
Western U.S. needs to learn to conserve water, but the farmers need large
amounts for their crops. All people of the world have problem with clean
fresh water, because it brings new wars and conflicts.

The result of greed?

Why aren’t people aware of this. Are people so blind as to what is going on
this the planet. This planet is fucked and to late to repair it.,
especially since the U.S has stubborn people.

i guess this is a part of the broader chinese movement towards energy
securing, seems the military build up should help enforce that or make it
easier to quell uproars

is the bottled water safe to drink?

I was in Bangkok in summer 2008 and was horrified by the appearance of the
water in the city’s “canals”. I swear to you, it GLOWED GREEN. Scary and
it’s coming a city near US.

Let’s make it clear, China is not censoring this information from their own
people. In fact,they are doing the best and trying to develop the new
technology to solve the problem. We hope they will succeed,we may learn
something from them for our future. The only thing Chris can do with the
bad spins is to fool you, my dear fellow Americans, but it won’t help us in
any way.

+Zy Liu ,,, very true, I seen it happen in California.
Worth repeating: http://fotomen.cn/2011/12/polution/2/
All states in US have followed California, it really works.
I clearly remember, me as a little guy, here in North Carolina.
I felt the pain, I was fined $3500 for a small error I made while burning
some garbage.

well thank god I waited to drink beer tonight. the water in the south is
in large supply but it is all run off from the north and black. nothing
lives in it. when I was in Hainin china I turned on the shower and it
comes out yellow and smells like piss. oh I was naked and standing in the
shower when I turned it on.

gao is gonna miss me guys, soon I go to china to bring home my spanking
brand new Chinese wife. she is Cantonese so yes a much better
quality person than his kind, so I will be very busy banging my brains out
and not able to play on youtube much. just be happy my video camera not
on. you might go blind.

Thanks for reminding me to help my country to build it much better. Thank
you so much.

Your so good at doing these vids dude, your both professional and
interesting, never letting things get to dry. Not even this ep xD