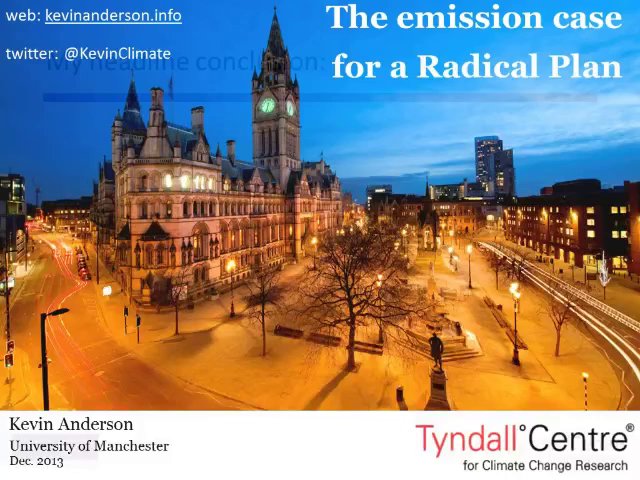 Kevin Anderson: This posts pulls together a couple of recent videos featuring Kevin Anderson. First up is an interview by Manchester Climate Monthly following the December 2013 Radical Emissions Reduction Conference in the UK. Kevin answers questions on the purpose of the conference, on scientists being “political”, and on civil disobedience and shale gas.
Manchester Climate Monthly also pulled out these 2 clips – Kevin Anderson on scientists who get political, Kevin Anderson on shale gas and disobedience.
Below is Kevin’s presentation from the conference. URL

Kevin Anderson – The emissions case for a radical plan from tyndallcentre on Vimeo.

The #1 core issue of all the Climate Change challenges: Psychological Denial and what to do about it. @ 13:10 to 16:00 mins The people who ought to know better, in fact often do know better, but choose to suppress or repress that knowledge, what do we do? Kevin Anderson responds: “I don’t know anyone who doesn’t fit into that category, myself included. I think we all fit at different levels into that category. […] we all need to support each other, to be candid to ourselves. […] At least if we know that other people are reflecting on their… Read more »

@ 7:40 mins Kevin Anderson speaks directly about those scientists who get “very political” simply by remaining silent; by not publicly defending their own work; by not publicly defending their peers; nor current Climate Science as a body of knowledge that clearly indicates dire repercussions for every society and nation. On being Political: “There are no such things as scientists who are not political. Scientists by their nature are being political, whether they engage or do not engage with the wider debates. And I would argue that the ones that are least political are those that engage in it.” On… Read more »

Reply
Go to Top
wpDiscuz
3
0
Would love your thoughts, please comment.x
()
x
| Reply
Cookie Consent
To provide the best experiences, we use technologies like cookies to store and/or access device information. Consenting to these technologies will allow us to process data such as browsing behavior or unique IDs on this site. Not consenting or withdrawing consent, may adversely affect certain features and functions. Learn more about the data usage on this website.
Manage options Manage services Manage vendors Read more about these purposes
View preferences
{title} {title} {title}