You are here:
2012DenialDocumentaryFilmsOilTar Sands 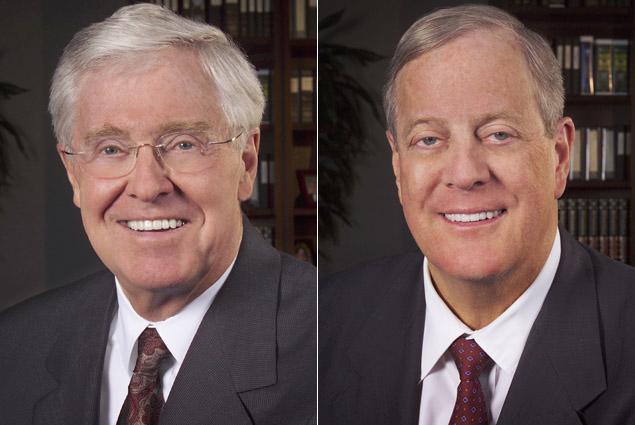 What can you do to fight back? Get the film. Host a screening. Tell your friends. Get the Koch brothers out of the shadows and into the spotlight.

Raise the soc sec age to 70 when corps won’t hire over 40? I paid into that
fund. It is Soc Sec INSURANCE. Awful people. Just awful.

TO ALL LIBERALS AND DEMOCRATS: SHOULD WE TALK ABOUT GEORGE SOROS, TOM
STEYER AND A.C.O.R.N. Funny how you and Greenwald cannot see your own
hypocrisy. I guess Obamacare really is trainwreck when you cannot defend
it and your only bag of tricks left is Koch Bros. attacks

I can’t believe we’re sending dope sellers to jail while these assholes get
away with destroying nature and people’s lives. They’re disgusting.

OutlawedSpank said this film was propaganda… He was probably just trolling, but I feel that this film does a big disservice to the cause it’s trying to serve by mixing elements of blatant propaganda and smear job with evidence backed valid points. The efect is the discreditation of those valid points that, if presented by themselves would have been irrefutable. For instance: They show how the Kochs are influencing the public oppinion and the government to get their way, and then bash them for not helping the “home owners who’s homes have been foreclosed on”… What the hell has that… Read more »

Here is the whole film. Well worth watching.

While the perspective in this film is somewhat skewed. These are exactly the same tactics used by St. Joseph’s mining company and the I.L.A. (International Lead Association). They infiltrated into government and academia to promote the use of lead in water systems, discourage any health concerns and ultimately destroy the public movement against lead use which started in the New York popular press way back in the 1880’s. It wasn’t until 1986 that the clean air and water act prohibited the use of lead in water because it causes learning disabilities, developmental problems, and brain cancer. Yet we still have… Read more »

they should do one of these on the Rockafellas… same story.

Please tell me the Koch Bro’s have not reproduced?

the propaganda of this film is laughable

They are not fighting unions to pay their workers less. They are not that
short sighted, they want to crush the unions to bankrupt the financial base
of the Democrats.

Pushing us to a Fascist state. #Kochsuckers.

The Republican party are parrots for ALEC and The #Kochsuckers.

I can’t understand how all these Koch drones can’t see what his intentions
truly are. Obama is trying to get the US off of foreign oil, trying to push
clean energy and suddenly all of these “libertarians and Tea party”
movements spring up calling for “smaller government” and “free market”, all
funded by big oil companies like Koch industries.
Of course, they want fewer regulations and less government oversight.
What has amazed me is that in the age of “global information” it has become
more easy than ever to cover the truth and hide information.

Watch this for an education:

So bizarre….A tycoon who honed his business skills under the watchful eye of the great capitalist…..Stalin? …returns to America a foaming-at-the-mouth racist (go figure), and raises 2 egomaniacal sons who claim to be libertarians who hate government, but in fact just hate humanity…and launch a buy all you can campaign to control ALL of the politics in the country just to pollute it, milk it,and punish the rest of us for using their oxygen. Only a true “socialist” ( like Stalin!) would have the need, the drive, and the soulless resolution to try to control an entire population. Old man… Read more »

They were attractive when they were younger

We have to stand all together and stop them

Very interesting, I could have done without the part where they go over the extravigant homes and rich boy toys they own but, hey, I get it. It’s very telling, on the other side, how loyal a following these guys have too. I personally don’t like them, but I don’t like Goerge Soros either. Not for their wealth but their meddling in politics causing a money race that innevitably drives those politicians who would have otherwise been less corruptable right into their, (the Kochs and Soros), arms. Very sobering though, this is why we need money out of politics, limits… Read more »

If there is anything that could possibly give back the House of Representatives to the Dems this fall it is a backlash against these guys. ———————————— Robert Greenwald’s “Koch Brothers Exposed” (Full) “Koch Brothers Exposed is a hard-hitting investigation of the 1% at its very worst. This full-length documentary film on Charles and David Koch—two of the world’s richest and most powerful men—is the latest from acclaimed director Robert Greenwald (Wal-Mart: the High Cost of Low Price, Outfoxed, Rethink Afghanistan). The billionaire brothers bankroll a vast network of organizations that work to undermine the interests of the 99% on issues… Read more »

I love how theres a commercial supported by the Koch brothers at the
begining of this.

These Jewish elitists in America have gone out of control… Americans
should really wake up like the rest of Europe did in 1930. There is a
reason for that kind of hate. Hate doesn’t happen for no reason.

Read the statement by David Koch from 1980, how he wished to abolish Social
Security, Medicare, minimum wage, any taxation on the wealthy, all
business regulation. Read about how their father was a huge racist. The
Kochs have been at this for a long time. They are evil.

U READY FOR THIS…..STOP THEM BEFORE THEY DAMAGE U AND YOUR FAMILY
INCLUDING YOUR CHILDREN …STOP THEM NOW !!!

More left wing propaganda and lies. The democrats need a boggy man to try
and hide their massive failed policies. Where is all the info on where the
Koch Bros have given Millions to hospitals, Museums and all the other
charity’s?. There is nothing wrong with being Rich, Even though the
democrat party is the Party of the rich they try and demonize the Koch
Bros. Democrats get donations from the super Rich like Warren Buffett,
George Soros, Hollywood elites, Wall St., Big Business, etc,…

God bless the Koch family for creating wealth and jobs for the American
people.

The irony, vain man causing cancer with his pollutants gets cancer. Trust
me there are worst things waiting for these fiends.

“What do you know about the Koch brothers? Have you ever been invited to
meet with them?”

One doesn’t need to meet with anyone to SEE the actual, REAL effect they
have on society as a whole. Example: I’ve never met YOU, but I know you are
simplistic, brain washed dipshit due to your POST HERE. See how that works?

No, of course you don’t.

For sale: The US.

Reply
Go to Top
wpDiscuz
148
0
Would love your thoughts, please comment.x
()
x
| Reply
Cookie Consent
To provide the best experiences, we use technologies like cookies to store and/or access device information. Consenting to these technologies will allow us to process data such as browsing behavior or unique IDs on this site. Not consenting or withdrawing consent, may adversely affect certain features and functions. Learn more about the data usage on this website.
Manage options Manage services Manage vendors Read more about these purposes
View preferences
{title} {title} {title}