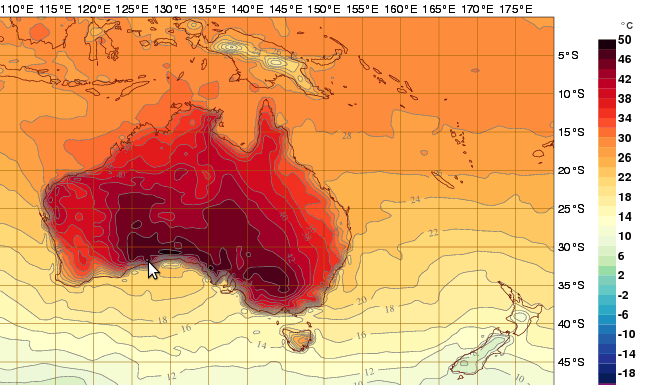 Australia has just sweltered through its hottest year on record, according to the Bureau of Meteorology. Average temperatures were 1.20 degrees Celsius above the long-term average of 21.8C, breaking the previous record set in 2005 by 0.17C.

Data collected and analysed by the Bureau of Meteorology show that 2013 was Australia’s warmest year on record while rainfall was slightly below average nationally.

The Earth has been rebounding out of the little ice age for 300 years –
there is no proof that the rate of warming is out of normal variability,
all the proof is that we are warming within the bounds of normal
variability. 1700- to 1735 warmed at a much faster rate than anything today
with all of our carbon dioxide. Solar cycles drive earths temperature-
carbon dioxide is a minor insignificant factor. Go investigate the facts.

With heat like this in Australia it is making me wonder what the melt
conditions are in Antarctica?

‘the world is cooling for 18 years now’ the retarded idiot deniers say. lol
They will have to lean the hard way that the majority of scientists are
right. My daughters kids will pay the price of our generation folly.

clearly the trillions and trillions of tons of CO2 and multitude of noxious chemicals that humans are discharging into the atmosphere every day – and have been doing so for decades – could not possibly have any effect on the atmosphere whatesoever or impact the climate in any way at all. i mean what kind of logic is that? that’s just so absurd! of course we have to continue to allow the oil industry to maintain it’s totalitarian monopoly over the energy sector and help them maintain their ‘corporate science’ that educates us on the real truth about how climate… Read more »

More background info on Extreme Weather Events and Unprecedented Effects 2013 AR5 WGI Science Summary for Policy Makers says: “…it is now *very likely* that anthropogenic (human activity / influence) forcing has contributed to the observed changes in the frequency and intensity of daily temperature extremes on the global scale since the mid-20th century. It is *likely* that human influence has *significantly increased* the probability of occurrence of heat waves in some locations…” “Since the AR4 (2007), there is some *new limited direct evidence* for an anthropogenic (man made/human activity) influence on extreme precipitation, including a formal detection and attribution… Read more »

WMO Reports Most extreme weather decade in History – 2001 to 2010 Warmest on Record – Wettest since 1901 – Floods were the most common extreme weather event See: http://climatestate.com/2013/07/07/signs-of-change-the-past-week-or-so-july-2013/ — MUST SEE 2013 VIDEO SUMMARY 18:39 minutes SOC – Epic Extreme Events Of Earth 2013 Review Mass Media Reports Published on Jan 5, 2014 http://youtu.be/0iZGVUa0BFo Warning: This video may be too intense and dramatic for some viewers to handle. Viewer discretion is advised! *This series does not mean the world is ending! These are documentaries of series of extreme weather events that are leading to bigger earth changes. If… Read more »

6 January 2014, Australia’s hottest year was no freak event: HUMANS CAUSED IT by Professor of Atmospheric Science David Karoly & Research Fellow Sophie Lewis at the University of Melbourne. “Using the climate models, the Fraction of Attributable Risk (FAR) shows how much the risk of extreme temperatures increases thanks to human influences. In our earlier study of our record hot Australian summer of 2012-13, we found that it was very likely (with 90% confidence) that human influences increased the odds of extreme summers such as 2012-13 by at least five times. In August 2013, Australia broke the record for… Read more »

A very good point and a fresh article from Business Insider is covering it. “While many climate extremes cannot be directly attributed to a changing climate, the burden of extremes Australia is experiencing is a product of climate change and requires a coordinated national response.” The 2013 record high is also remarkable because it occurred not in an El Nino year (where a warm ocean current can push up temperatures), but a normal year. Professor David Karoly, from the School of Earth Sciences at University of Melbourne, says analysis has been made of the temperature record using simulations with nine… Read more »

Reply
Go to Top
wpDiscuz
11
0
Would love your thoughts, please comment.x
()
x
| Reply
Cookie Consent
To provide the best experiences, we use technologies like cookies to store and/or access device information. Consenting to these technologies will allow us to process data such as browsing behavior or unique IDs on this site. Not consenting or withdrawing consent, may adversely affect certain features and functions. Learn more about the data usage on this website.
Manage options Manage services Manage vendors Read more about these purposes
View preferences
{title} {title} {title}
Loading Comments...