The Ocean Is Going To Start Confusing Fish And Dissolving Seashells 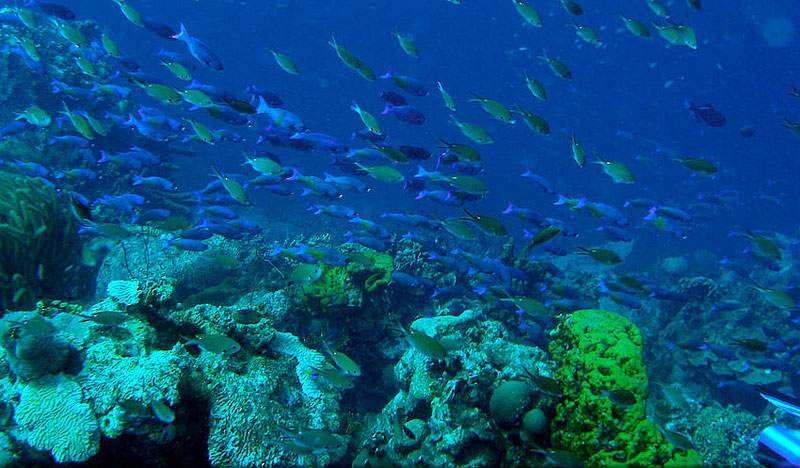 They found that at atmospheric carbon concentrations of 500 to 650 parts per million — levels that are predicted by 2100 — corals, echinoderms, mollusks and fish were negatively impacted, though crustaceans such as crabs and lobsters were relatively unaffected. When atmospheric carbon concentrations rose above 650 ppm, all groups studied were harmed.

The study also found that ocean acidification is likely to affect sea life in multiple ways — fish might become hyperactive or confused, causing them to be less fearful of predators, and their metabolism could also change. This happens because water acidified to expected 2050 levels starts to acidify their internal tissues, particularly the central nervous system. For mollusks, a big concern is the rate at which they can form shells — an essential ability that is likely to slow as oceans become more acidic.

Already, the effects of climate change on the world’s oceans — including acidification, melting sea ice and warming waters — are major concerns for sea creatures. Research has found that Antarctic krill, which make up a vital base part of the Antarctic marine food chain, are facing increasing threats as the waters they live in warm. Krill are sensitive creatures — krill eggs need low acidity, deep water and a narrow range of water temperature in order to hatch and grow successfully, so increasing acidity and temperatures threaten their long-term survival.

Previous studies have found that ocean acidificatiion may be leading to a decline in shellfish, because the acid can disrupt the development of shellfish larvae, particularly their ability to grow shells. Coral, too, has trouble building its skeleton as acidity levels rise — so much so that Oceana predicts some species of coral could become functionally extinct within 20 years. To further research how ocean acidification will affect sea life, a team of scientists from the National Oceanic and Atmospheric Administration set out on a cruise last month to take samples of plankton, algae and water in the U.S. West Coast.

The marine life study adds to mounting evidence of climate change’s threat to wildlife, both aquatic and terrestrial. A recent study by researchers in the U.K. found a vast number of species, including several sea birds and butterflies, are at risk from rising sea levels and increasingly severe storms. Last month, a study found many species would have to evolve 10,000 times faster than they’ve done historically in order to adapt to the rapidly changing climate, and according to the IPCC, somewhere between 40 and 70 percent of Earth’s species could go extinct if temperatures rise by more than 3.5 degrees Celsius.

First slide appears to be incorrect. The 300-plus billion ton figure refers to weight of CARBON of “fuel” burned. The figure for carbonic acid gas, aka carbon dioxide, is 44/12 (3.666) larger (over one trillion tons).