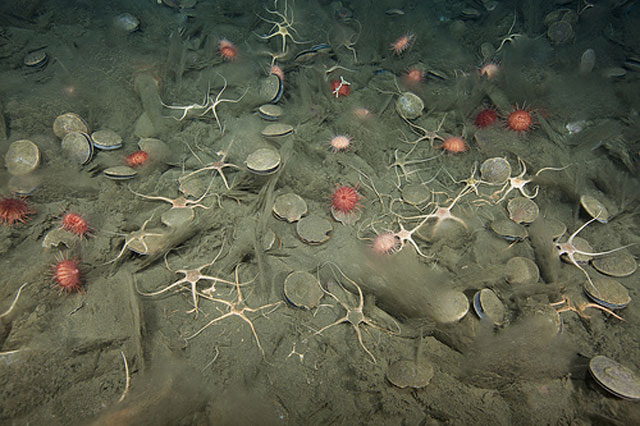 Image: At the GeoSoilEnviroCARS beamline at the Advanced Photon Source, scientists mapped slices of 24 brittle starfish skeletons in 3 dimensions using X-ray tomography to find out how much volume the eroded skeletons had lost, and to reconstruct their structures. Credit: Shawn Harper

Phys.org — Under the sea ice of Explorers Cove, Antarctica, is a startling array of life. Brittle stars, sea urchins and scallops grow in profusion on the seafloor, a stark contrast to the icy moonscape on the continent’s surface. This distant, frigid ecosystem may serve as a microcosm for the health of the entire ocean. And the plentiful brittle stars that dot the seafloor can act as a harbinger of aquatic trouble.

Scientists at Vanderbilt University and the New York Health Department say that these cold-water communities may be especially vulnerable to the effects of ocean acidification. The group has established the rate at which seawater is dissolving brittle star skeletons, and note that ocean acidity may be close to a tipping point. Surpassing that threshold may threaten the growth of marine invertebrates and upset entire ecosystems.

Using high-energy X-rays at the Advanced Photon Source at the U.S. Department of Energy’s Argonne National Laboratory, the team published in the May 2013 issue of the journal Palaios a baseline for further monitoring ocean acidification. The paper is titled “Dissolution of ophiuroid ossicles on the shallow Antarctic shelf: implications for the fossil record and ocean acidification.”

Brittle star skeletons are made of calcite, which dissolves more readily in acidic waters. With increasing levels of carbon dioxide and rising acidity in the ocean, brittle stars and other invertebrates may have more difficulty secreting calcite, affecting their skeletal formation and their ability to survive.

The researchers set out to establish the rate at which these skeletal parts, or ossicles, were dissolving.

“Marine invertebrates like brittle stars can signify the effects of ocean acidification, and may be used to track its effects on vulnerable organisms,” said Beverly Walker, lead author of the paper and supervisor of the Crary Science Lab in McMurdo Station, Antarctica.

To find this rate, the researchers compared eroded ossicles to pristine ones, inspecting them with a scanning electron microscope for microstructural damage and fractures. Then, at the GeoSoilEnviroCARS beamline at the APS, the team mapped 24 ossicles in 3 dimensions using X-ray tomography to find out how much volume the eroded ossicles had lost, and to reconstruct the structure of the ossicles.

Scientists found that at the current rates, the ossicles need six to 105 years to dissolve completely. But they also noted that with acidity levels rising, the calcite in brittle stars is likely to be even less stable in the future. “The fact that ophiuroid ossicles show signs of initial dissolution after only two years of contact with seawater,” the researchers wrote, “suggests that they are close to a threshold of dissolution.”

To obtain these eroded ossicles, scuba divers collected brittle stars from the seafloor, and the researchers then placed the bagged remains of brittle stars directly on theseafloor or suspended more than a meter above it. These samples were subjected to the ocean’s currents for two years.

Before this study, data on the dissolution rates of brittle stars was scarce. Now that this baseline rate is established, further research can build on this data to track the effects of ocean acidification on these highly specialized communities.

When ice ages come and go the planet can change temperature 4-7°C in as little as 5,000 years. 50 times slower than us. In the past, a 5°C change normally would take 20,000 years, we are going to do 5°C in 50-100 years, 200 times faster. http://oceanservice.noaa.gov/education/pd/climate/factsheets/iscurrent.pdf Climate change is happening 100 times faster than in the past. http://www.scientificamerican.com/article.cfm?id=todays-climate-change-proves-much-faster-than-changes-in-past-65-million-years The acidity of the oceans will more than double in the next 40 years. This rate is 10 times faster than during earth’s mass extinction event of 55 million years ago when when a mass extinction of marine life occurred and… Read more »