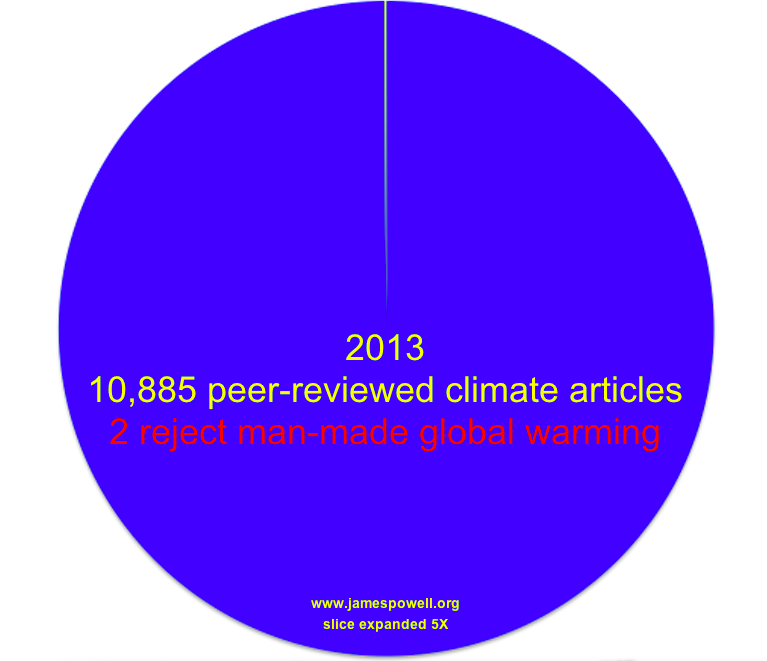 Howard Brown, August 8 2013: In his book, “The Inquisition of Climate Science,” James Lawrence Powell takes a penetrating look at the subject of “my experts are smarter than yours.”

Powell has a Ph.D. in geochemistry and is a scientific and educational heavyweight. Opposition to climate change has reached a point where deniers cherry-pick fragmentary scientific points and use them to produce flawed or misleading arguments to “refute” the findings of reputable climate scientists.

Powell states, “One could go on rebutting each of the remaining denier arguments — and scientists have. But the pattern is the same: the deniers scavenge the work of legitimate scientists to find any discrepant result and, when they discover one, boast that ‘global warming was never a crisis.’ Scientists find new evidence that removes the discrepancy, or discover that it resulted from an error, which they correct, only to have the deniers go on repeating the discredited claim.”

Two cases in point involve Antarctic sea ice and ice ages. Climate deniers take fragmentary information and spin it misleadingly to claim that it demonstrates the reports of climate research scientists are in error or fraudulent. Fortunately, sea ice and ice ages, as reason to contradict climate science assertions, have been examined as “substitutes” for CO2 and have been disproven.

Regarding Antarctic sea ice, deniers note that sea ice is growing, therefore supposedly refuting the claim that the atmosphere is warming. The deniers omit the fact that sea ice is growing because of colder Antarctic ocean currents. Land ice is melting to the tune of 24 cubic miles per year, as measured by gravity sensing satellites. Try to imagine what a cubic mile looks like.

Relative to ice ages cycles, deniers would have us believe the hypothesis of “cyclical behavior” as the “real” cause of climate change (as opposed to the properties of CO2) and produces simple ups and downs as it always has. Not to worry. After all, don’t winter and summer appear alternatively — cold followed by hot, followed by cold, by hot, by cold, etc.?

Referencing ice age behavior merely changes the scale of cyclical behavior from yearly to approximately every 100,000 years. Use of the word “cyclical” implies alternating periods of cold and hot. It erroneously implies that, if you just sweat things out, you will always have a following respite of “cold.”

The coming and going of ice ages is a spurious reason to deny the role of CO2 in global temperature increase.

In a shorter time frame, CO2 increase has been documented in measurements at Mauna Loa, Hawaii. These measurements are extremely precise and have been correlated with NOAA global temperature records. In combination with ice core drillings, the Mauna Loa measurements also reveal the emergence of temperature spikes due to the effects of the industrial revolution and increased use of fossil fuels.

Ice age cycles, by the way, come as a result of the Earth’s orbital behavior over approximately 100,000-year cycles. The orbit shape (eccentricity) goes from circular to elliptical, changing the amount of solar heat the Earth receives during elliptical exposures. Accumulating CO2 is the real villain.

These are merely two of the diversionary tactics used by deniers to keep people from focusing on the real villain, CO2, and to reduce the urgency in finding remedies to the growing problem.

There is no cycle that is going to interrupt the parade of record heat years or the increase in frequency or severity of weather events such as floods, hurricanes, tornados, droughts, etc.

Beware the deniers who go on repeating the discredited claim.

“The rate of CO2 accumulation has been linear, not cyclical. ”

Interesting comment. You realize that about 15, 000 to 10,000 years ago the earth endured three cold spells called the Dryas’s. It was so cold in the last one that glaciers grew again for 1000 years, yet there were no corresponding changes in CO2. You’re right its linear, even though global temps are not. Not supposed to be this way.

Klem, you propose the hypothesis that global temperatures change linearly with temperature. You are wrong. The Younger Dryas has been shown to be a change in North Atlantic circulation, that was matched by warming in Antarctica. So, there are large effects caused by ocean circulation, storage of heat in the oceans, changes in snow and ice cover, changes in cloud cover and aerosols.

You illustrate the danger of trying to reconstruct how the world works based on one poorly understood fact.