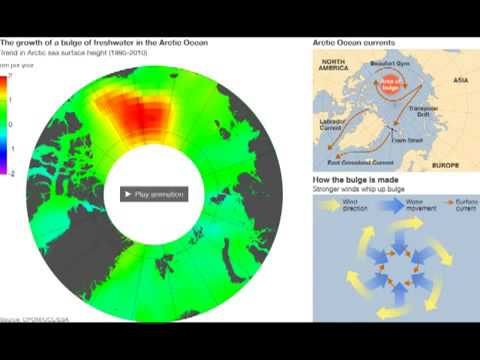 UK scientists have detected a huge dome of fresh water that is developing in the western Arctic Ocean. The bulge is some 8,000 cubic km in size and has risen by about 15cm since 2002.

The team thinks it may be the result of strong winds whipping up a great clockwise current in the northern polar region called the Beaufort Gyre. This would force the water together, raising sea surface height, the group tells the journal Nature Geoscience.

“In the western Arctic, the Beaufort Gyre is driven by a permanent anti-cyclonic wind circulation. It drives the water, forcing it to pile up in the centre of the gyre, and this domes the sea surface,” explained lead author Dr Katharine Giles from the Centre for Polar Observation and Modelling (CPOM) at University College London.

The data (1995-2010) indicates a significant swelling of water in the Beaufort Gyre, particularly since the early part of the 2000s. The rising trend has been running at 2cm per year. Source

Does Cyclonic Activity in the Arctic drive Freshwater into Deep Ocean and Unlock Methane Hydrate? https://climatestate.com/magazine/2013/08/does-cyclonic-activity-in-the-arctic-drive-freshwater-into-deep-ocean-and-unlock-methane-hydrate/

let us hope nothing happens to the bubble.