Past decade saw unprecedented warming in the deep ocean 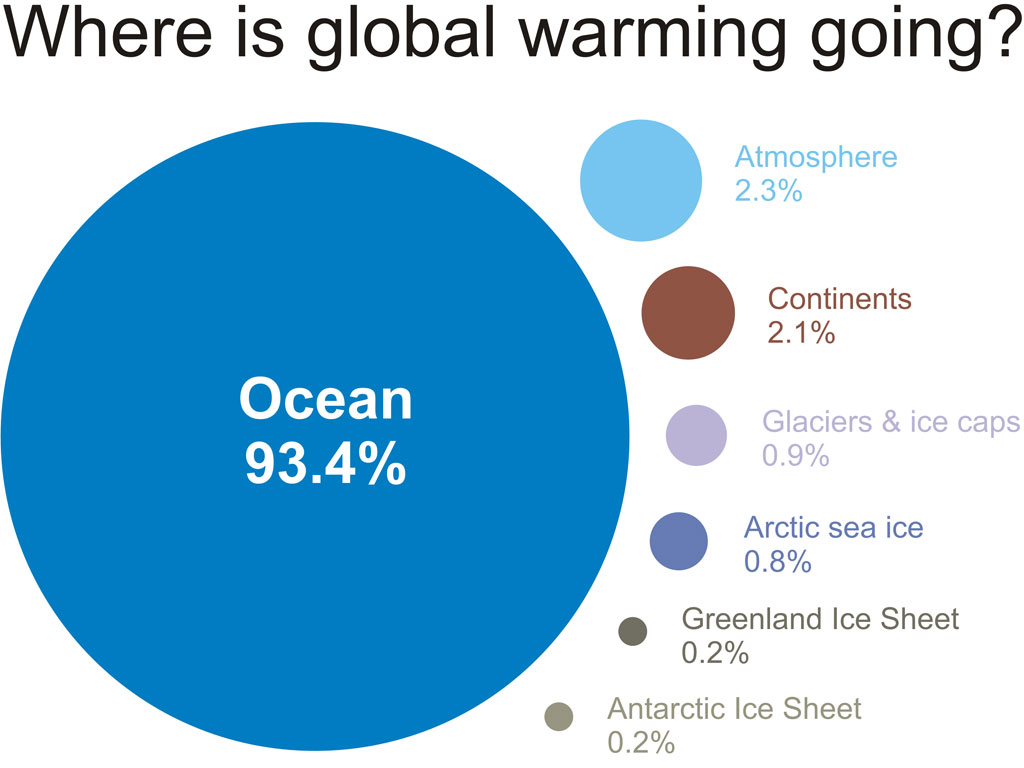 By Phys.org: From 1975 on, the global surface ocean has shown a pronounced-though wavering-warming trend. Starting in 2004, however, that warming seemed to stall. Researchers measuring the Earth’s total energy budget-the balance of sunlight streaming in compared to the amount of light and heat leaving from the top of the atmosphere-saw that the planet was still holding on to more heat than it was letting out. But with that energy not going into warming the surface ocean-a traditionally important energy sink-scientists weren’t sure where it went. It became known, in some circles, as a case of “missing heat.”

Through a reanalysis of global ocean heat content measurements, Balmaseda et al. find the missing heat. The authors show that though the upper ocean waters, from the surface to 700 meters (2,300 feet) depth, showed no warming from 2004 to 2008, the waters from 700 to 2000 meters (2,300 to 6,500 feet) were warming at an unprecedented rate. They find that during the past decade, of the excess energy trapped by the anthropogenic greenhouse effect that has gone into warming the ocean, 30 percent of it has contributed to warming the deep ocean.

The authors also find that throughout the observational record the warming of the surface ocean has stalled before, because of large volcanic eruptions or swings of the El Niño-Southern Oscillation. They also note that changes in surface wind patterns are an important factor in driving ocean heat content from the surface layers to the deep ocean.

Understand Global Warming in 20 minutes
October 27, 2021
Subscribe
0 Comments
Inline Feedbacks
View all comments
Go to Top
wpDiscuz
0
0
Would love your thoughts, please comment.x
()
x
| Reply
Cookie Consent
To provide the best experiences, we use technologies like cookies to store and/or access device information. Consenting to these technologies will allow us to process data such as browsing behavior or unique IDs on this site. Not consenting or withdrawing consent, may adversely affect certain features and functions. Learn more about the data usage on this website.
Manage options Manage services Manage vendors Read more about these purposes
View preferences
{title} {title} {title}
Loading Comments...