The Sublime of Superman, Man of Steel 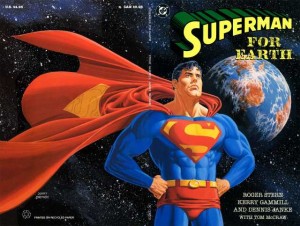 Watch how Superman cleans up an oil spill!

Superman for earth?  The new  Superman ‘Man of Steel’ (2013 / IMDB) is another film story about the destruction of environment, which threatens the  survival of the human species. There is one race living on the planet Krypton and is about to use up the last energy resources of their planet, causing total destruction. Superman’s father, Jor-El, mentions:”Krypton is doomed because it has used up all of its natural resources.” Sound’s familiar?

Now, the human race on the other hand has to avert this from happening – needs to fight, otherwise remaining inhabitants from Krypton will cause the destruction by harvesting Earth’s core energy.  In another scene a super tornado wracks havoc, demonstrating the forces of nature and hints to today’s challenges, to save “our” world from more extreme weather and climate disruption.

In the final movie scene the alien invaders try to inject particulates into earth atmosphere. While more drastic, that is what we as a race have chosen to do, when burning coal, fossil fuels or when trying to climate engineer the atmosphere of Earth. Thus, when Superman fights the invaders mastermind, the sublime could be interpreted of our collective affords to save the world from environmental destruction – to preserve the environment today.

just like a bollywood movie… and i am an Indian….

SUPERMAN! Why didn’t you save last year when we had the Oil Spill!?!

Hope the blu-ray picture quality looks a lot better than these videos lol.

Great! Now, if only he could fix the one that happened with BP!

Is it too late for a BP joke?

mother fucker would ya look at that..

Superman is awesome. Even the problematic type film that this was, there
were still some great moments.

Gotta love how they use rivets to design a modern oil tanker. Yep, all
those decades of welding just weren’t worth it, good old rivets is the way
to go.

Reply
Go to Top
wpDiscuz
10
0
Would love your thoughts, please comment.x
()
x
| Reply
Cookie Consent
To provide the best experiences, we use technologies like cookies to store and/or access device information. Consenting to these technologies will allow us to process data such as browsing behavior or unique IDs on this site. Not consenting or withdrawing consent, may adversely affect certain features and functions. Learn more about the data usage on this website.
Manage options Manage services Manage vendors Read more about these purposes
View preferences
{title} {title} {title}
Loading Comments...