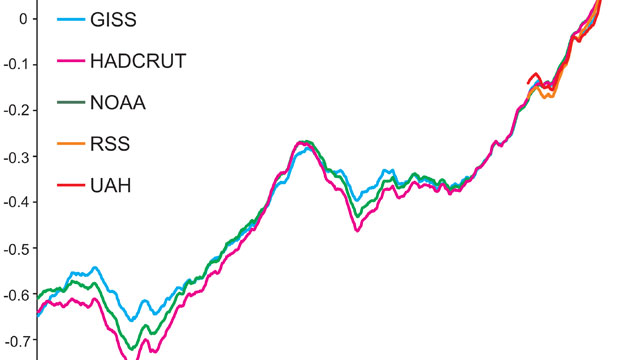 Feedbacks in the climate system – in which warming is linked to natural CO2 increase, driving further warming – may operate faster than previously thought.

ACE CRC: Researchers use Antarctic and Greenland ice cores to examine temperature and CO2 changes during the largest natural climate change in Earth’s recent climate history: the warming out of the last ice age.

As Antarctic temperatures increased ocean circulation was altered and CO2, most likely from the deep Southern Ocean, was released to the atmosphere. Previous studies had suggested that it took up to 1000 years for this to happen. But the new study, drawing on data from five separate ice cores, whittles that figure down.

“The ice cores reveal a near-synchronous temperature and CO2 increase. If there was a lag at all then it was likely no more than 400 years,” says Joel Pedro from the Antarctic Climate and Ecosystems CRC, in Hobart, who led the study.

Eric Steig, an American ice core expert based at the University of Washington who examined Pedro’s PhD thesis, said almost all previous work had provided uncertainties on the time lag between temperature and CO2 in the order of many hundreds to even thousands of years. “I cannot emphasize enough how important this result is,” he said. “The authors collapse these values to something so short that it has major implications for our understanding of the carbon cycle and climate change.”

Beginning about 19,000 years ago, the extensive ice sheets covering Canada and Northern Europe began to melt back. The initial warming was likely triggered by cyclic variations in the geometry of the Earth’s orbit. Over the next 8,000 years atmospheric CO2 levels increased by close to 50%, helping to drive an eventual global average temperature increase of 5C and a sea-level rise of over 100 m.

Resolving the sources and processes responsible for the CO2 increase has been a longstanding puzzle. The new results support hypotheses linking the increase to rapid hemispheric-scale reorganisations of ocean and atmospheric circulation moving CO2 from the deep Southern Ocean to the atmosphere around Antarctica.

Pedro says that there are similarities but also important differences between current climate change and the natural processes described in their research.

“The coupled rise in temperature and natural increase in CO2 that helped end the ice age took place gradually, over about 8000 years. What we have seen since the start of the industrial revolution is a similar CO2 increase occurring over only a few hundred years. This is way faster than anything in the ice core record and it’s clearly human-caused. Just as the steady increase in CO2 helped to melt the ice caps and warm the Earth out of the ice age, the rapid increase now in CO2 is also driving up temperatures, only at a much faster rate,” he said.

An important question arising from the study is whether current anthropogenic warming may drive additional natural CO2 increases sooner than we thought, compounding the climate change problem. Pedro acknowledges that the research raises this possibility, but cautions that a firm answer on whether we need to revise thinking on the timescales of carbon cycle response to anthropogenic warming requires further research.

Dr Pedro says the study of natural warming only underlines the speed at which human-created climate change has occurred. He says 8000 years’ worth of natural CO2 increases have been created in the 200 years since the industrial revolution.

“Just as the steady increase in CO2 helped to melt the ice caps and warm the earth out of the ice age, the rapid increase now in CO2 is also driving up temperatures, only at a much faster rate,” he said.“What we’re doing now is over a hundred times faster.” Source News.com.au

Abstract
Antarctic ice cores provide clear evidence of a close coupling between variations in Antarctic temperature and the atmospheric concentration of CO2 during the glacial/interglacial cycles of at least the past 800-thousand years. Precise information on the relative timing of the temperature and CO2 changes can assist in refining our understanding of the physical processes involved in this coupling. Here, we focus on the last deglaciation, 19 000 to 11 000 yr before present, during which CO2 concentrations increased by ~80 parts per million by volume and Antarctic temperature increased by ~10 °C.

Utilising a recently developed proxy for regional Antarctic temperature, derived from five near-coastal ice cores and two ice core CO2 records with high dating precision, we show that the increase in CO2 likely lagged the increase in regional Antarctic temperature by less than 400 yr and that even a short lead of CO2 over temperature cannot be excluded. This result, consistent for both CO2 records, implies a faster coupling between temperature and CO2 than previous estimates, which had permitted up to millennial-scale lags. Source Climate of the Past