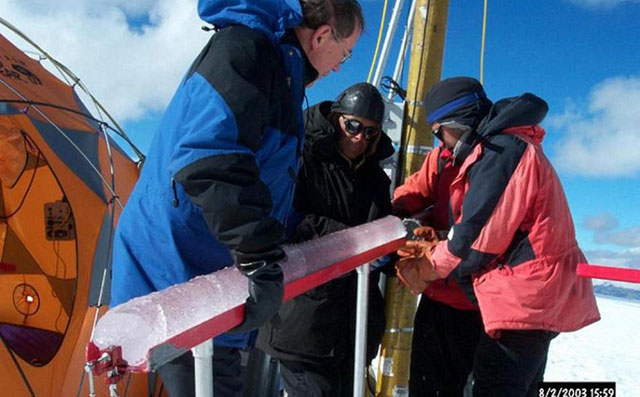 By analyzing the chemistry of bubbles of ancient air trapped in Antarctic ice, scientists have been able to determine the composition of Earth’s atmosphere going back as far as 800,000 years, and they have developed a good understanding of how carbon dioxide levels have varied in the atmosphere since that time. But there has been little agreement before this study on how to reconstruct carbon dioxide levels prior to 800,000 years ago.

“You would have to go back at least 15 million years to find carbon dioxide levels on Earth as high as they are today.”

“We are able, for the first time, to accurately reproduce the ice-core record for the last 800,000 years — the record of atmospheric C02 based on measurements of carbon dioxide in gas bubbles in ice,” Tripati said. “This suggests that the technique we are using is valid.

“A slightly shocking finding,” Tripati said, “is that the only time in the last 20 million years that we find evidence for carbon dioxide levels similar to the modern level of 387 parts per million was 15 to 20 million years ago, when the planet was dramatically different.” Source Science Daily

The carbon dioxide (CO2) content of the atmosphere has varied cyclically between ~180 and ~280 parts per million by volume over the past 800,000 years, closely coupled with temperature and sea level. For earlier periods in Earth’s history, the partial pressure of CO2 (pCO2) is much less certain, and the relation between pCO2 and climate remains poorly constrained. We use boron/calcium ratios in foraminifera to estimate pCO2 during major climate transitions of the past 20 million years. During the Middle Miocene, when temperatures were ~3° to 6°C warmer and sea level was 25 to 40 meters higher than at present, pCO2 appears to have been similar to modern levels. Decreases in pCO2 were apparently synchronous with major episodes of glacial expansion during the Middle Miocene (~14 to 10 million years ago) and Late Pliocene (~3.3 to 2.4 million years ago). Source Science Mag