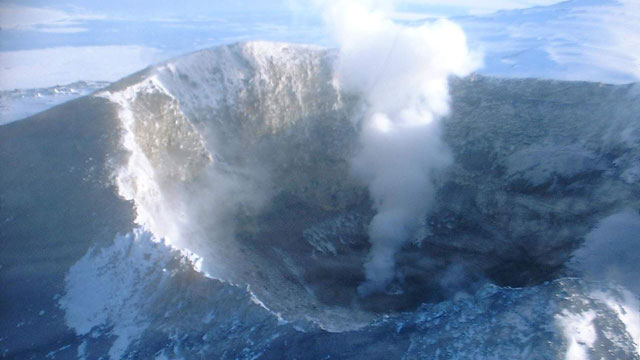 The first evidence of a volcanic eruption from beneath Antarctica’s most rapidly changing ice sheet. The volcano on the West Antarctic Ice Sheet erupted 2000 years ago (325BC) and remains active. Using airborne ice-sounding radar, scientists from British Antarctic Survey (BAS) discovered a layer of ash produced by a ‘subglacial’ volcano. It extends across an area larger than Wales.

Lead author, Hugh Corr of the BAS says, “The discovery of a ‘subglacial’ volcanic eruption from beneath the Antarctic ice sheet is unique in itself. But our techniques also allow us to put a date on the eruption, determine how powerful it was and map out the area where ash fell. We believe this was the biggest eruption in Antarctica during the last 10,000 years. It blew a substantial hole in the ice sheet, and generated a plume of ash and gas that rose around 12 km into air.”

The discovery is another vital piece of evidence that will help determine the future of the West Antarctic Ice Sheet and refine predictions of future sea-level rise. Co-author Professor David Vaughan (BAS) says,

“This eruption occurred close to Pine Island Glacier on the West Antarctic Ice Sheet. The flow of this glacier towards the coast has speeded up in recent decades and it may be possible that heat from the volcano has caused some of that acceleration. However, it cannot explain the more widespread thinning of West Antarctic glaciers that together are contributing nearly 0.2mm per year to sea-level rise. This wider change most probably has its origin in warming ocean waters.”

Volcanoes are an important component of the Antarctic region. They formed in diverse tectonic settings, mainly as a result of mantle plumes acting on the stationary Antarctic plate. The region also includes amongst the world’s best examples of a long-lived continental margin arc (Antarctic Peninsula), a very young marginal basin (Bransfield Strait) and an oceanic island arc (South Sandwich Islands). Many extinct volcanoes are very well preserved and others are still active (e.g. Deception Island, Mount Erebus, and the South Sandwich Islands).

Volcanic eruptions were common during the past 25 million years, and coincided with the great period of climatic deterioration that resulted in the formation of the Antarctic ice sheet. Many of the volcanoes show the effects of interaction with ice. BAS has played a major role in describing these effects and modelling their influences on the resulting volcanic sequences. It is important to describe and understand these interactions in geologically recent times in order to predict future configurations of the ice sheet and its role in the global system.British Antarctic Survey

The shifting stress might even cause eruptions in unexpected places. “We think that during the Gjàlp eruption, magma reached the surface at an unusual location, mid-way between two volcanoes, because of these stress changes,” says Pagli. McGuire thinks the Vatnajökull study is based on “perfectly reasonable” physics. However, he says that climate change presents an even more explosive threat. “It’s not just unloading the crust that triggers volcanic activity but loading as well.”

He and his team are looking into the effects that rising sea-levels – also a consequence of melting ice caps – will have on volcanoes. “We are going to see a massive increase in volcanic activity globally,” he told New Scientist. “If we look back at previous warm periods, that is what happened.” New Scientist