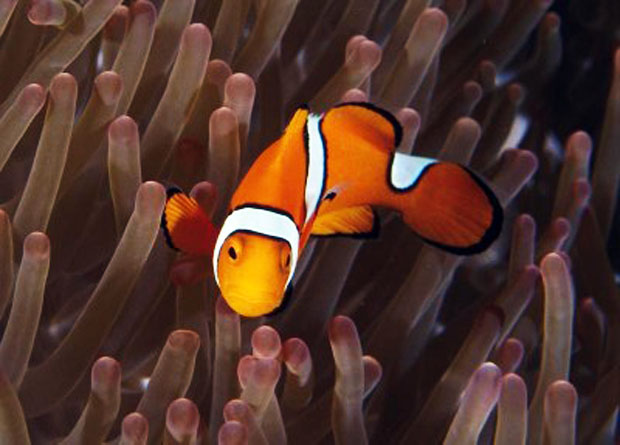 Science Daily: Jan. 21, 2012 — Rising human carbon dioxide emissions may be affecting the brains and central nervous system of sea fishes with serious consequences for their survival, an international scientific team has found.

Carbon dioxide concentrations predicted to occur in the ocean by the end of this century will interfere with fishes’ ability to hear, smell, turn and evade predators, says Professor Philip Munday of the ARC Centre of Excellence for Coral Reef Studies and James Cook University.

“For several years our team have been testing the performance of baby coral fishes in sea water containing higher levels of dissolved CO2 — and it is now pretty clear that they sustain significant disruption to their central nervous system, which is likely to impair their chances of survival,” Prof. Munday says.

“We’ve found that elevated CO2 in the oceans can directly interfere with fish neurotransmitter functions, which poses a direct and previously unknown threat to sea life,” Prof. Munday says.

Prof. Munday and his colleagues began by studying how baby clown and damsel fishes performed alongside their predators in CO2-enriched water. They found that, while the predators were somewhat affected, the baby fish suffered much higher rates of attrition.

“Our early work showed that the sense of smell of baby fish was harmed by higher CO2 in the water — meaning they found it harder to locate a reef to settle on or detect the warning smell of a predator fish. But we suspected there was much more to it than the loss of ability to smell.”

The team then examined whether fishes’ sense of hearing — used to locate and home in on reefs at night, and avoid them during the day — was affected. “The answer is, yes it was. They were confused and no longer avoided reef sounds during the day. Being attracted to reefs during daylight would make them easy meat for predators.”

Other work showed the fish also tended to lose their natural instinct to turn left or right — an important factor in schooling behaviour which also makes them more vulnerable, as lone fish are easily eaten by predators.

“All this led us to suspect it wasn’t simply damage to their individual senses that was going on — but rather, that higher levels of carbon dioxide were affecting their whole central nervous system.”

The team’s latest research shows that high CO2 directly stimulates a receptor in the fish brain called GABA-A, leading to a reversal in its normal function and over-excitement of certain nerve signals.

While most animals with brains have GABA-A receptors, the team considers the effects of elevated CO2 are likely to be most felt by those living in water, as they have lower blood CO2 levels normally. The main impact is likely to be felt by some crustaceans and by most fishes, especially those which use a lot of oxygen.

Prof. Munday said that around 2.3 billion tonnes of human CO2emissions dissolve into the world’s oceans every year, causing changes in the chemical environment of the water in which fish and other species live.

“We’ve now established it isn’t simply the acidification of the oceans that is causing disruption — as is the case with shellfish and plankton with chalky skeletons — but the actual dissolved CO2 itself is damaging the fishes’ nervous systems.”

The work shows that fish with high oxygen consumption are likely to be most affected, suggesting the effects of high CO2may impair some species worse than others — possibly including important species targeted by the world’s fishing industries.