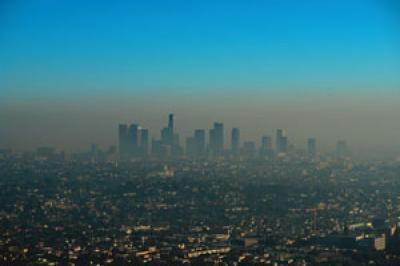 Pollutant’s cooling effect on climate may be overstated, study

The Los Angeles Times, May 15, 2013: Don’t count on sulfur dioxide to bridle climate change. The ability of that pollutant to reflect the sun is not quite what it was assumed to be, according to new research. Sulfur dioxide — a common pollutant from burning fossil fuels, contributes to the formation of aerosol particles in the atmosphere, which reflect sunlight. Figuring out just how much this can counteract greenhouse effects of carbon dioxide and other gases has remained one of the bigger uncertainties in climate modeling.

Scientists at the Max Planck Institute for Chemistry now say that climate models probably overstate the cooling effect. They highlighted an often-overlooked chemical process involving mineral dust in clouds that affects the lifespan of sulfate aerosol particles. The scientists studied clouds formed on a mountaintop, chronicling sulfur compounds in parcels of air before, during and after cloud formation. Inside clouds, sulfur dioxide is oxidized to form sulfate. This occurs via two chemical paths. One is catalyzed with hydrogen peroxide and ozone, and it’s the process that figures heavily in most climate models.

But there is a more common oxidation path, scientists found: That reaction is aided by “transition metal ions” — bits of iron, manganese, titanium and such — that come from mineral dust particles, where water gathers in early cloud formation. The sulfates catalyzed through these metal ions tend to form on large, coarse grains of metallic dust, and because of their size, they fall out of the cloud at a faster rate than finer sulfates. So the time they’re suspended in the atmosphere, and reflecting sunlight, is briefer than previously thought, the researchers found.

In places such as China and India, where sulfur dioxide emissions are rising and there is more mineral dust in the air, the precipitation effect could have a significant impact. “Future aerosol cooling may be strongly overpredicted by current climate chemistry models,” the authors suggest.