You are here:
2013Carbon TaxEconomyPolicy 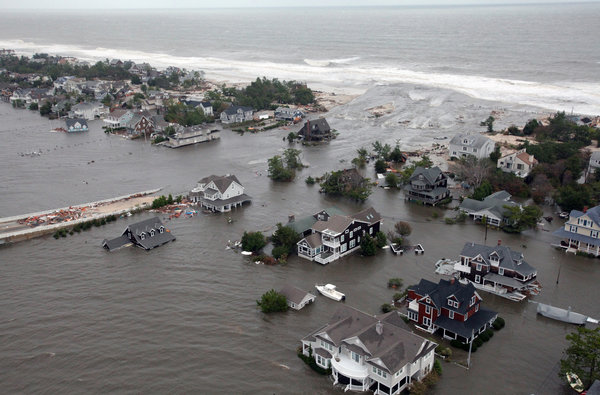 By EDUARDO PORTER / New York Times: If there were one American industry that would be particularly worried about climate change it would have to be insurance, right?

Yet when I asked Mr. Nutter what the American insurance industry was doing to combat global warming, his answer was surprising: nothing much. “The industry has really not been engaged in advocacy related to carbon taxes or proposals addressing carbon,” he said. While some big European reinsurers like Munich Re and Swiss Re support efforts to reduce CO2 emissions, “in the United States the household names really have not engaged at all.” Instead, the focus of insurers’ advocacy efforts is zoning rules and disaster mitigation.

Last week, scientists announced that the concentration of heat-trapping carbon dioxide in the atmosphere had reached 400 parts per million — its highest level in at least three million years, before humans appeared on the scene. Back then, mastodons roamed the earth, the polar ice caps were smaller and the sea level was as much as 60 to 80 feet higher.

The milestone puts the earth nearer a point of no return, many scientists think, when vast, disruptive climate change is baked into our future. Pietr P. Tans, who runs the monitoring program at the National Oceanic and Atmospheric Administration, told my colleague Justin Gillis: “It symbolizes that so far we have failed miserably in tackling this problem.” And it raises a perplexing question: why hasn’t corporate America done more to sway its allies in the Republican Party to try to avert a disaster that would clearly be devastating to its own interests?

Mr. Nutter argues that the insurance industry’s reluctance is born of hesitation to become embroiled in controversies over energy policy. But perhaps its executives simply don’t feel so vulnerable. Like farmers, who are largely protected from the ravages of climate changeby government-financed crop insurance, insurers also have less to fear than it might at first appear.

The federal government covers flood insurance, among the riskiest kind in this time of crazy weather. And insurers can raise premiums or even drop coverage to adjust to higher risks. Indeed, despite Sandy and drought, property and casualty insurance in the United States was more profitable in 2012 than in 2011, according to the Property Casualty Insurers Association of America.

But the industry’s analysis of the risks it faces is evolving. One sign of that is how some top American insurers responded to a billboard taken out by the conservative Heartland Institute, a prominent climate change denier that has received support from the insurance industry.

The billboard had a picture of Theodore Kaczynski, the Unabomber, who asked: “I still believe in global warming. Do you?”

Concerned about global warming and angry to be equated with a murderous psychopath, insurance companies like Allied World, Renaissance Re, State Farm and XL Groupdropped their support for Heartland.

Even more telling, Eli Lehrer, a Heartland vice president who at the time led an insurance-financed project, left the group and helped start the R Street Institute, a standard conservative organization in all respects but one: it believes in climate change and supports a carbon tax to combat it. And it is financed largely with insurance industry money.

Mr. Lehrer points out that a carbon tax fits conservative orthodoxy. It is a broad and flat tax, whose revenue can be used to do away with the corporate income tax — a favorite target of the right. It provides a market-friendly signal, forcing polluters to bear the cost imposed on the rest of us and encouraging them to pollute less. And it is much preferable to a parade of new regulations from the Environmental Protection Agency.

“We are having a debate on the right about a carbon tax for the first time in a long time,” Mr. Lehrer said.

Bob Inglis, formerly a Republican congressman from South Carolina who lost his seat in the 2010 primary to a Tea Party-supported challenger, is another member of this budding coalition. Before he left Congress, he proposed a revenue-neutral bill to create a carbon tax and cut payroll taxes.

Changing the political economy of a carbon tax remains an uphill slog especially in a stagnant economy. But Mr. Inglis notices a thaw. “The best way to do this is in the context of a grand bargain on tax reform,” he said. “It could happen in 2015 or 2016, but probably not before.”

He lists a dozen Republicans in the House and eight in the Senate who would be open to legislation to help avert climate change. He notes that Exelon, the gas and electricity giant, is sympathetic to his efforts — perhaps not least because a carbon tax would give an edge to gas over its dirtier rival, coal. Exxon, too, has also said a carbon tax would be the most effective way to reduce emissions. So why hasn’t the insurance industry come on board?

Robert Muir-Wood is the chief research officer of Risk Management Solutions, one of two main companies the insurance industry relies on to crunch data and model future risks. He argues that insurers haven’t changed their tune because — with the exception of 2004 and 2005, when a string of hurricanes from Ivan to Katrina caused damage worth more than $200 billion — they haven’t yet experienced hefty, sustained losses attributable to climate change.

“Insurers were ready to sign up to all sorts of actions against climate change,” Mr. Muir-Wood told me from his office in London. Then the weather calmed down.

Still, Mr. Muir-Wood notes that the insurance industry faces a different sort of risk: political action. “That is the biggest threat,” he said. When insurers canceled policies and raised premiums in Florida in 2006, politicians jumped on them. “Insurers in Florida,” he said, “became Public Enemy No. 1.”

And that’s the best hope for those concerned about climate change: that global warming isn’t just devastating for society, but also bad for business. E-mail: eporter@nytimes.com