You are here:
ArcticNational Security 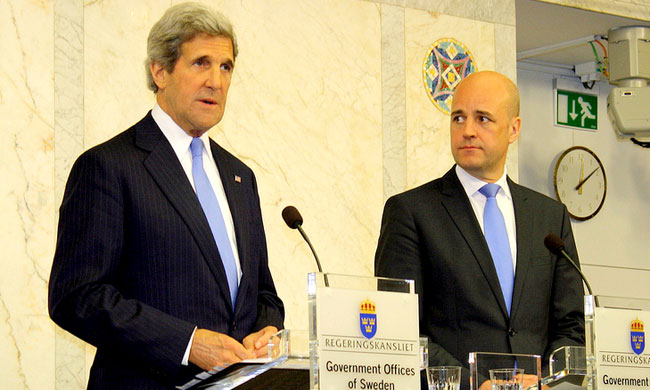 Apologizes for America’s lack of action on “climate change.”

Speaking today in Stockholm, Sweden, John Kerry called “climate change” a “life and death” issue. And the secretary of state apologized on behalf of the United States for not doing enough to fight “climate change.”

“I also want to say that we appreciate Sweden’s partnership because these challenges in Europe and North Africa and Central Asia simply do not belong to one nation; they’re shared by all of us and they affect all of us. And at the top of that list of shared challenges which does not get enough attention, and it’s one of the principal reasons that I came here today to share bilateral meetings with the Prime Minister and the Foreign Minister but also will travel on to Kiruna to take part in the Arctic Council, a principal challenge to all of us of life and death proportions is the challenge of climate change,” said Kerry.

Kerry went on to apologize for lack of action on the part of America:

“And I have to say that I regret that my own country – and President Obama knows this and is committed to changing it –needs to do more and we are committed to doing more. And we come here to Kiruna with a great understanding of the challenge to the Arctic as the ice melts, as the ecosystem is challenged, the fisheries, and the possibilities of increased commercial traffic as a result of the lack of ice raises a whole set of other issues that we need to face up to.”

Further Evidence suggests Arctic Ocean Methane Storage getting Unstable
July 19, 2020
Subscribe
0 Comments
Inline Feedbacks
View all comments
Go to Top
wpDiscuz
0
0
Would love your thoughts, please comment.x
()
x
| Reply
Cookie Consent
To provide the best experiences, we use technologies like cookies to store and/or access device information. Consenting to these technologies will allow us to process data such as browsing behavior or unique IDs on this site. Not consenting or withdrawing consent, may adversely affect certain features and functions. Learn more about the data usage on this website.
Manage options Manage services Manage vendors Read more about these purposes
View preferences
{title} {title} {title}
Loading Comments...