You are here:
2012ConflictHistoryNational SecurityPolicy 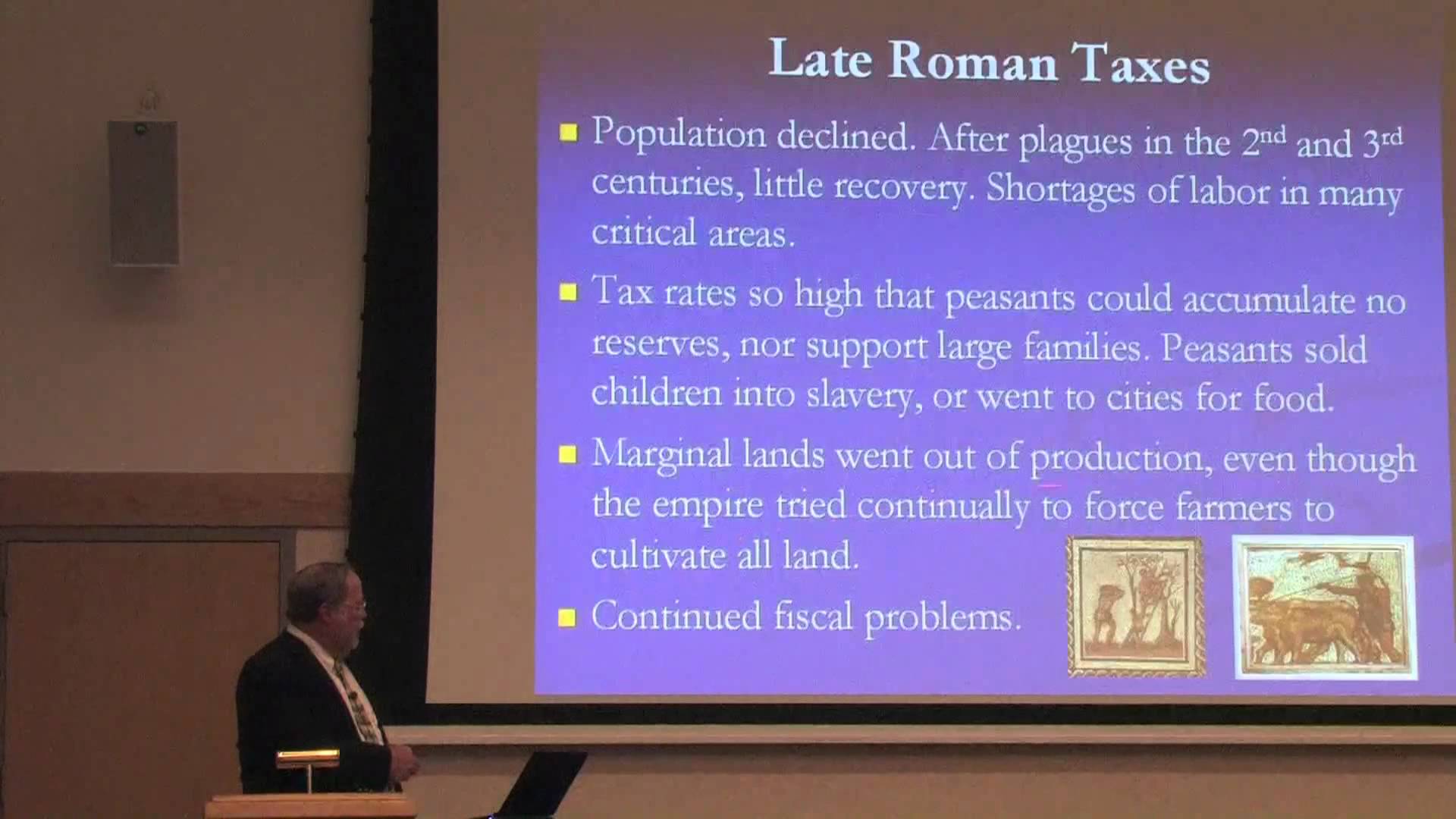 The collapse of complex societies of the past can inform the present on the risks of collapse. Dr. Joseph Tainter, author of the book The Collapse of Complex societies, and featured in Leonardo Dicaprio’s film The Eleventh Hour, details the factors that led to the collapse of past civilizations including the Roman Empire.

Covid-19 Sets the Stage for the Collapse of Human Civilization? – Climate State

[…] human species is full of examples detailing our vulnerabilities to collapse and total decline. As historian Jospeh Tainter explains, system complexity further works against us, most people probably call this today, incompetence. […]

Although it scares a lot of people to having to accept it, everything can be explained in and by physics theory. More complexity is the same as more disorder. I’ll explain. More and more scientists today start to realize this and there have also been scientific reports published on it. Biology is chemistry, chemistry is physics, and society and culture and personal behaviour are heavily determined by genetic structures and the natural environment. Everything in culture, technology and biology together = The distribution of energy, meaning ‘processes describable in physics’ (wave patterns). As the ‘pressure’ on local energy effiency rises… Read more »

In a lecture on complexity, how could he have missed the Internet?

“Everything that can be invented has been invented.”

Charles H. Duell – Commissioner of US patent office in 1899

Steady state economy is the only version of economy that can be sustained
for the lifetime of the human race. Growth can not be maintained in a
finite environment. Like it or not.

Isn’t it just delightful to see a good lecture followed up by crackpot
questions?

I agree with much of what he says, except for the idea that innovation cannot save us, and that the cost of innovation increases exponentially. One of the main reasons our innovation is stagnant is the fact that copyrights were only supposed to last no more than 4 years to keep the free flow of new ideas to innovate society. Disney came in and spent lots of money when its first cartoon steamboat willie came out, to extend copyrights for years, and even years more since that time. Innovation doesn’t cost us, corruption does. One of the saddest inflictions on… Read more »

very informative video, thanks for the upload !

While there are other alternative energy sources there is not one that is
simple, portable and as varied in useage as oil…………..we don’t have
a substitute for that is more of what he is implying…………wind and
solar where just examples stated, not the be all to end all……

get your balls out

The problem: the system was/ is not set-up for efficiency or
sustainability. In fact, the system was created by governments to be
unstable and inefficient long-term in order to gain short term rewards. The
politicians engage in vote buying through unsustainable government
programs, regulation, restrictions, taxation, etc. that needlessly
increases complexity within the economy and society. Meanwhile, governments
also fail to fulfill its basic duties, because more complexity brings more
power.

Tell me the reason that Energy and Complexity are functionally intertwined.
Please use your understanding of the Laws of Classical Physics in your
answer. Please present your answer in an Aristotelian Logical Format with
Two Premises and the Conclusion.. Do you have a grasp of what Dr. Tainter
is saying? You listened to the presentation. Do you think broadly? Those
people have a better grasp than most. The answer to my question deals with
Thermodynamics. Specifically it deals with Entropy.

Basic income is the aswer and solution for all troubles.

“Are all societies doomed to collapse” That *would* explain the Fermi
Paradox.

the problem is there are to many, my life boat is being polluted with to
much shit!

In terms of “choosing to fail or succeed” an example I believe Jared
Diamond uses in his book is the Hopi Indians as a successful society. Also,
the sea faring peoples of northern greenland vs the greenland norse. The
choice was adopting some of the food practices of the sea hunting indians
vs attacking them and recording that they bleed. This was a choice that the
greenland norse made. They consciously choose to have these locals as their
enemies instead of learning from them.

I find that MOST people don’t really grasp what Tainter is talking about,
because in the end they are always looking for an “out” to this situation.
There IS no “out,” it is like the frog who fell into the buttermilk pail…
keep kicking, or die. Human civilization, and possibly life itself, is too
complex to survive in a steady state. There have been and will be further
collapses, and no amount of R&D will prevent the next collapse.

Good grief, some of those students asking questions at the end are examples
of why we are screwed. They ‘listened’ to the presentation but still have
no grasp of what Dr Tainter is saying.

The key difference is that while Jared Diamond believes environmental
problems caused the collapse of societies Tainter has made the case that
the cause was economic, rooted in the structure of society itself.
Honestly, Diamond’s work looks like more enviro fear mongering. The
environmental problems he talks about had happened previously, yet the
societies discussed didn’t collapse. Primitivism is tempting, but it’s a
road to nowhere.

No mention of entropy? Hmm. The w.roman empire failed completely within two
hundred years and it had an energy consumption of about one hundreth of
ours? “Sustainability” is another human myth, as is “environmental
protection” and “environmental remediation” by industry. Ecosystem
sustainability has been subverted by human industry over and over again as
a claim of man’s dominion over all living things. The time is near when
humans reconnect with the program of ecosystem morality.

What I can say about the social complexity is that it bears no benefits. In
the end it is an act of sidestepping problems on one side to face it later
on the other side.

Power and complexity is actually the same thing

They are people who benefit from a complex system and who in fact try to
make the system more complex, just because they can hide themselves into
this system. More complex is the system, more hidden they are, they think.
Internet is a simplification of our mutual information exchanges, which
allow us to see those who are hidden.

starts out pretty good. problems. steady state is a myth. growth isn’t required. change is required. isn’t that clear? when we change our energy efficiency – America and cut its fossil fuel consumption by 80% – or 800 billion dollars or more a year. that’ll save a trillion dollars a year, get rid of pollution and the illness that is causing globally. That’s *change* in human behavior. Rideshare, better cars, electric cars, LED lights. That’s happening. America is using less fossil fuel than ever. Growth in China’s standard of living doesn’t mean growth in consumption. It means better clothing, better… Read more »

This was a very good presentation by Dr. Tainter after having read his book
and that of Jared Diamond. However, he failed to mention the role of the
immutable law of entropy in the collapse or mutation of complex systems. I
cannot go into detail on this forum, but there was a book written by Jeremy
Rifikin in 1980 by the name “Entropy – A New World View.” Simply, it
answers a lot of the questions of why complex systems eventually collapse
and new systems emerge.

The second last question after the talk is where our solutions may lie in: the facilitation of more long-term temporal ideas in the education system to begin a new generation of long-term thinkers, those that are curious enough to explore these kind of problems and apply their temporal knowledge. These problems that lead to societal collapse may be due to the way the educational system is designed and the fruit of that system isn’t geared towards thinking in more collectivistic manner that progresses through time and space. Tainter said that humans are generally not evolved to think on such a… Read more »

This was a really insightful presentation, thank you.

The growth in complexity seems to be a problem of Governments – having no direct cost benefit feedback. Unfortunately not only Governments grow in complexity, they also happen to prevent Business Cycle from occurring, keeping ‘too big to fail’ businesses shielded by interest rate manipulation or direct subsidies, in order to maintain status quo – employment etc. Maybe the solution is to shrink the Government and allow recessions in Business Cycle to clear the dead wood – companies which grow too complex for their own benefit. In centralized society the collapse is inevitable. But in diversified society the collapses can… Read more »

I cannot stress how important this video and this guys work is. Anyone who
is interested in society and the future will find this video very
informative.