Just How Many Climate “Sceptics” Are There? 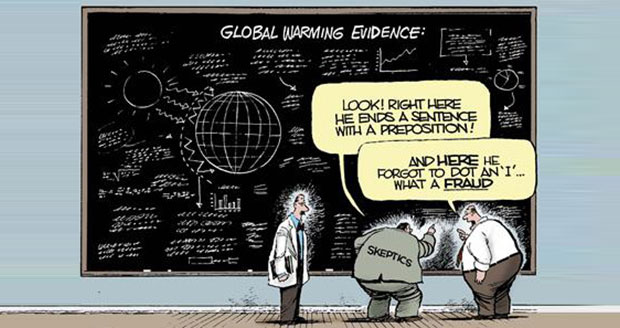 By Graham Readfearn / Desmogblog.com – “The media will often report on what the public thinks about climate change – and they are getting it wrong,” says Professor Joseph Reser, of Griffith University’s School of Psychology, who has led one of the most extensive and detailed surveys into Australian attitudes to climate change and the underpinning science.

After asking 7,500 Australians about their attitudes to climate change and their acceptance that humans are having something to do with it, Reser says the vast majority of people accept the science – it’s happening and humans have a hand in it.

Several studies have pointed out just how difficult it can be to get a true picture of the general public’s view on climate change. Not to mention how people’s economic views – such as support for the free market – or political views are closely aligned with their views on climate change.

How the questions are phrased can also skew the results, an analysis of hundreds of polls found last month.

So what do Australians really think? Or rather, what do various surveys claim they think?

The free market think tank the Institute of Public Affairs, which has long promoted climate science denial, said last year that only one third of Australians thought humans were to blame for global warming. In 2010, a report in the Herald Sunnewspaper also told readers two thirds of Australians were “not convinced” by man made climate change.

The Lowy Institute annually polls opinions about climate change. The number of people saying Australia shouldn’t act “until we are sure that global warming is a problem” rose from seven per cent in 2006 to 18 per cent in 2012.

Surveys by The Climate Institute in 2012 found 69 per cent of people attribute climate change to a combination of natural and human causes – a position on the science relatively close to reality. In the US, a new Gallup survey finds 57 per cent of Americans say climate chnage is caused by pollution from humans..

Professor Reser’s research for the National Climate Change Adaptation Research Facility uses much larger sample sizes and is set up to ask questions in a variety of ways and to allow for greater uncertainty. Reser finds some 83 per cent of Australians have the science about right – climate change is happening and humans and natural cycles play a role.

Only a tiny percentage – about eight per cent or less depending on the criteria – could be considered genuine climate science deniers. Only about four per cent of people refused to accept climate change existed regardless of any cause.

“Social science based survey findings show consistently that the majority of Americans, British and Australians accept climate change is happening and they accept the science and they are concerned. And yes, there are seven to 10 per cent of people who are very dismissive.”

Professor Iain Walker is a research leader at the Government-funded research agency CSIRO which has twice surveyed 5000 Australians on their views about climate change and their acceptance of the science.

In those surveys, where people could choose from four statements about climate change and its causes, about 40 per cent of Australians accept climate change but say the causes are natural. Half say it’s largely caused by humans.

The discrepancy between this survey and Professor Reser’s is most likely down to the methodology, how the questions are framed, how people interpret the words “climate change” and how in the CSIRO study, only four options were given with a yes or no answer.

Prof Walker says when you look across the most substantive surveys around the world and in Australia “the vast majority of people accept it’s happening and humans are involved to some extent or another.”

A study co-authored by Walker and published in the journal Nature Climate Changelooked at how accurate people’s own estimates of the views of the rest of the community were.

People who say climate change is driven by human activity tended to underestimate slightly how many people in the community thought the same.

The implications of this are obvious. Sceptics are more confident in speaking out because they think they belong to a sizeable group. People who accept the science think they might be outnumbered if they speak out when the evidence strongly suggests they belong to the majority.

Prof Walker says: “The media representation of the climate change debate is one way you can explain why it is that people so grossly overestimate the proportion of contrarians in the population.”

So why, if the media are doing such a bad job of correctly reflecting the public’s view, aren’t there more sceptics? The answer could be that people lend much more credibility to scientists than they do to the media and government.

In Reser’s research, respondents were asked to grade from one to six how much they trusted (six being “completely” and 1 being “not at all” ) scientists, the media and government as sources of information on environmental issues – not on climate change alone.

Some 53 per cent of people gave a score of five or six to the scientists – indicating a high level of trust. On the same measure, the Government rated poorly with just 9.4 per cent of people. The media scored a disastrous 5.1 per cent. A poll in the UK by Carbon Brief also found people there had high levels of trust in scientists.

“The media has low credibility with the public” says Reser. “But around the world, the vast majority of scientists – say 97 per cent or more – are worried and accept that climate change is happening. I think the public is aware of that fact.”