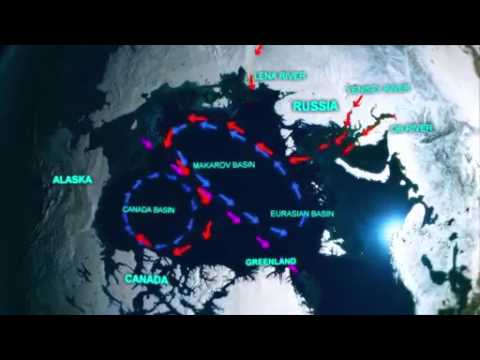 The transpolar drift (purple arrows) is a dominant circulation feature in the Arctic Ocean that carries freshwater runoff (red arrows) from rivers in Russia across the North Pole and south towards Greenland. Under changing atmospheric conditions, emergent circulation patterns (blue arrows) drive freshwater runoff east towards Canada, resulting in freshening of Arctic water in the Canada Basin.

NASA (Januray 4, 2012): PASADENA, Calif. – A new NASA and University of Washington study allays concerns that melting Arctic sea ice could be increasing the amount of freshwater in the Arctic enough to have an impact on the global “ocean conveyor belt” that redistributes heat around our planet.

Lead author and oceanographer Jamie Morison of the University of Washington’s Applied Physics Laboratory in Seattle, and his team, detected a previously unknown redistribution of freshwater during the past decade from the Eurasian half of the Arctic Ocean to the Canadian half. Yet despite the redistribution, they found no change in the net amount of freshwater in the Arctic that might signal a change in the conveyor belt.

The team attributes the redistribution to an eastward shift in the path of Russian runoff through the Arctic Ocean, which is tied to an increase in the strength of the Northern Hemisphere’s west-to-east atmospheric circulation, known as the Arctic Oscillation. The resulting counterclockwise winds changed the direction of ocean circulation, diverting upper-ocean freshwater from Russian rivers away from the Arctic’s Eurasian Basin, between Russia and Greenland, to the Beaufort Sea in the Canada Basin bordered by the United States and Canada. The stronger Arctic Oscillation is associated with two decades of reduced atmospheric pressure over the Russian side of the Arctic. Results of the NASA- and National Science Foundation-funded study are published Jan. 5 in the journal Nature.

Between 2003 and 2008, the resulting redistribution of freshwater was equivalent to adding 10 feet (3 meters) of freshwater over the central Beaufort Sea.

The freshwater changes were seen between 2005 and 2008 by combining ocean bottom pressure, or mass, data from NASA’s Gravity Recovery and Climate Experiment satellites with ocean height data from NASA’s ICESat satellite. By calculating the difference between the two sets of measurements, the team was able to map changes in freshwater content over the entire Arctic Ocean, including regions where direct water sample measurements are not available.

“Knowing the pathways of freshwater is important to understanding global climate because freshwater protects sea ice by helping create a strongly stratified cold layer between the ice and warmer, saltier water below that comes into the Arctic from the Atlantic Ocean,” said Morison. “The reduction in freshwater entering the Eurasian Basin resulting from the Arctic Oscillation change could contribute to sea ice declines in that part of the Arctic.”

[…] Between 2003 and 2008, the resulting redistribution of freshwater was equivalent to adding 10 feet (3 meters) of freshwater over the central Beaufort Sea. NASA Arctic ocean currents changed […]