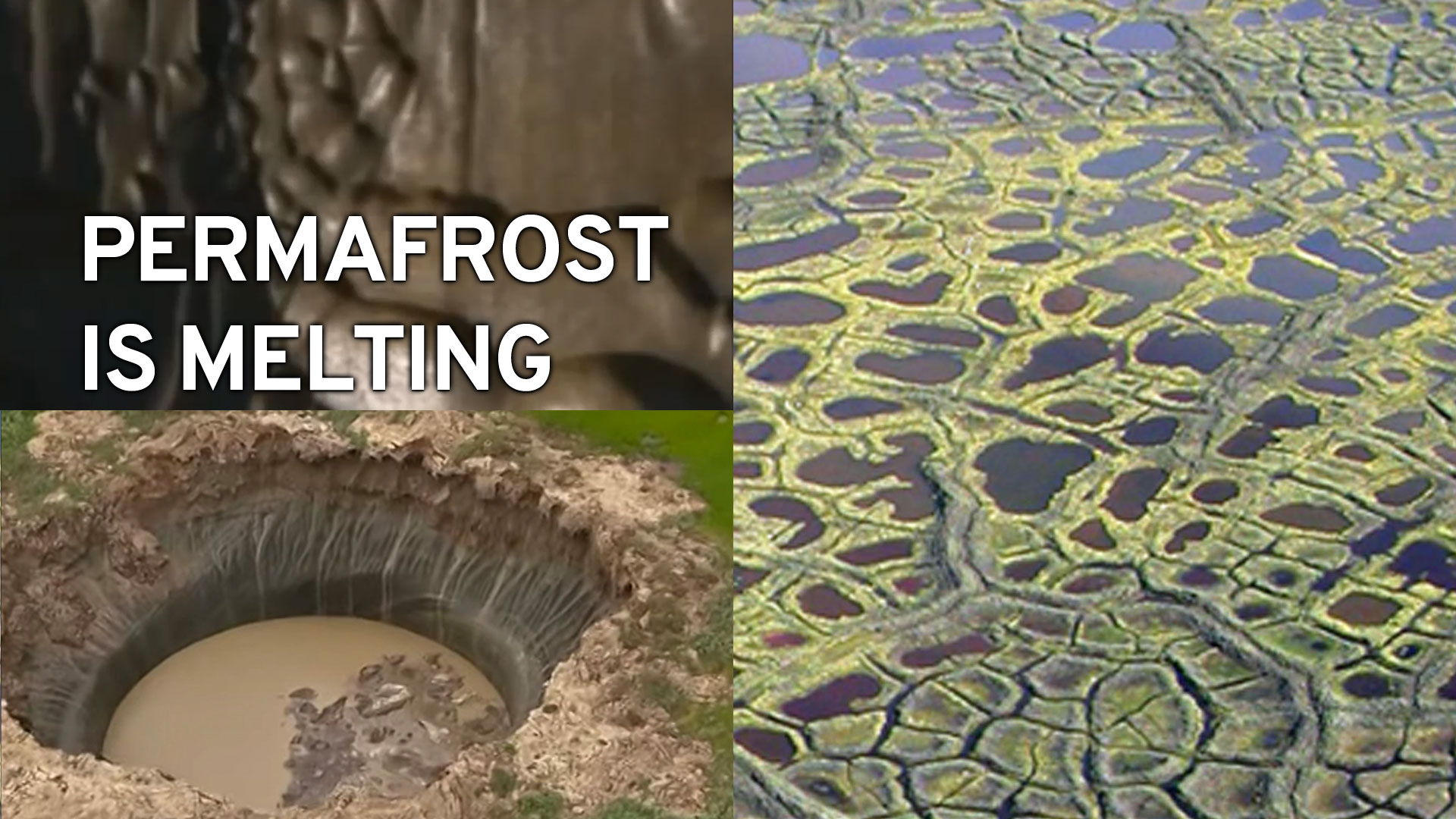 UPDATE March 19th 2018. There is a new study published after we released this video, it shines more light onto the subject of thawed soil carbon activation. The Arctic’s carbon bomb might be even more potent than we thought https://www.washingtonpost.com/news/energy-environment/wp/2018/03/19/the-arctics-carbon-bomb-might-be-even-more-potent-than-we-thought Direct study link https://www.nature.com/articles/s41558-018-0095-z.epdf?referrer_access_token=QimruZqY0uQyvJhlxat8ItRgN0jAjWel9jnR3ZoTv0N8I-MYIYWzKL_kSfxnCJqK5MhEqa1ECTKGMkwkdtwwdRBnpqZb1-iie3xj4GeIn_ATzYOYZ_qH4owg6tA5W_yYLypIP2SUN5-B1T5yexwNadXdwCZt3wyAarxCPC0Nv3lXljO2n4dUQQDimyNua3Tnd21O6bRqgq5YEXModik7bKXZTRVCsXL5btzFCn1ue-c-ltsrUkl1ZlWfKJ4h4XiaA6qEcw5474V3V54ossVOcVqoW3t1_ow7xF60nqcgwrNXk5mNIEx9Z6M48j2ZmaN7wOxfwaQ5BDzgkO51tABEDT710d1AeRsMA44IH8haLVAGf3Z3T9_HC0MLnAaJfWJo&tracking_referrer=www.washingtonpost.com

The trend from frozen tundra soils shifting to thermokarst erosion and thaw ponds, may in the future be exacerbated by increased rainfall and extreme weather events. http://onlinelibrary.wiley.com/doi/10.1002/lol2.10063/epdf and http://www.inrs.ca/english/actualites/thawing-permafrost-causing-browning-northern-lakes

What just a few years ago was considered to be unrealistic has become true, much larger areas of permafrost begin to melt, releasing organic carbon trapped in ice for ages. The message today, thawing of permafrost is more widespread, and faster than anticiapted. Once thawed, soils can turn to lakes or ponds often with an altered biogeochemistry, one that favors additional production of greenhouse gases.

The new study “Increasing dominance of terrigenous organic matter in circumpolarfreshwaters due to permafrost thaw”, published in March 2018 found that organic carbon from permafrost melting is making its way into the waters of the regions. This particular type of carbon is good at absorbing sunlight, creating conditions for additional heating of surrounding soils, and to boost activity of methane producing microbes. As a result, water bodies are getting increasingly darker and stratified, which affects a number of biological processes in these ecosystems.

The authors write, “Our results demonstrate a strong terrestrial imprint on freshwater ecosystems in degrading ice-rich permafrost catchments, and the likely shift toward increasing dominance of land-derived organic carbon in waters with ongoing permafrost thaw.” Some of the affected regions resemble what could be a scenery from a science fiction movie with aliens. Entire landscapes with clusters of thaw ponds, and muddy elevated cracks in between, like tendrils curling up along its edges.

Northern permafrost regions contain one of the largest pools of carbon in the Earth system. Microbial metabolism thrives in many of these lakes and ponds that receive dissolved and particulate organic carbon from eroding permafrost soils. Thaw ponds alone account for approximately 25% of the estimated total area covered by all lakes and ponds in the Arctic.

Many of these waterbodies are created by thermokarst, through erosion and collapse of ice-rich permafrost, resulting in the thaw ponds. While in some parts of the Arctic landscape, these ponds are disappearing by drainage, evaporation, or infilling, in other northern regions they are becoming larger and more numerous. And many thaw ponds are hotspots for strong emissions of greenhousegases to the atmosphere.

Our understanding today suggests that thaw ponds are likely to become more turbid and heterotrophic with increasing carbon inputs from thawing permafrost soils. A heterotroph is an organism that ingests or absorbs organic carbon. Thaw ponds contain high amounts of dissolved organic matter, and the research hints at higher amounts than in waterbodies not affected by thermokarst processes.

Additional, thaw ponds characteristics include a low amount of algae production, with phytoplankton delta c thirteen isotopic signatures more negative when compared to non-thaw ponds. One explanation for this finding are elevated concentrations of methane. The large amount of dissolved organic matter in these water bodies decreases the light availability for photosynthesis, resulting in a shift toward a heterotrophic production-based food web, and with a high production of CO2 and CH4 (methane).

Due to the fractionation during methanogenesis, a separation process in which a certain quantity of a mixture (gas, solid, liquid, enzymes, suspension, or isotope) is divided during a phase transition, into a number of smaller quantities (fractions), methane has more negative delta C thirteen values. Fractionation in turn makes the methane able to be metabolized by methanotrophic bacteria (prokaryotes), the precursor methanogenesis, is the formation of methane by microbes under the right conditions.

The mixotrophic algae phytoplankton community is growing in thaw ponds, and possibly dependent on the methanotrophic bacteria as an energy source.

The dark water surfaces of thaw ponds, rich in organic matter, absorb much more sunlight, hence increase the landscape albedo, and thus present another phenomena similar to the darkening observed in parts at Greenland’s glacier surfaces by particulates or tiny algae, or through the disappearing Arctic sea ice.

This trend from frozen tundra soils shifting to thermokarst erosion and thaw ponds, may in the future be exacerbated by increased rainfall and extreme weather events, toward net heterotrophic conditions, with increased dissolved organic matter, oxygen depletion, and a greater production of greenhouse gases across the circumpolar North.

As the climate warms, the carbon balance of arctic ecosystems will respond in two opposing ways:
Plants will grow faster, leading to a carbon sink, while thawing permafrost will lead to decomposition
and loss of soil carbon.
https://www.amap.no/documents/doc/snow-water-ice-and-permafrost-in-the-arctic-swipa-2017/1610

The results presented here—that large C losses are possible from the permafrost region, whose magnitude is strongly governed by the dynamics of deeper decomposition, and that large losses are unlikely to be compensated by N fertilization accompanying decomposition—underscore the importance of considering permafrost carbon dynamics in ESMs. Permafrost soils may produce a strong, albeit delayed, C response to global change, and must therefore be included in assessments of long-term C cycle feedbacks to climate change.
http://www.pnas.org/content/112/12/3752

Context Arctic set to be warmer than parts of UK as temperatures hit 30C higher than average http://www.independent.co.uk/environment/arctic-warmer-uk-temperatures-weather-climate-change-global-warming-30c-higher-average-a8226446.html