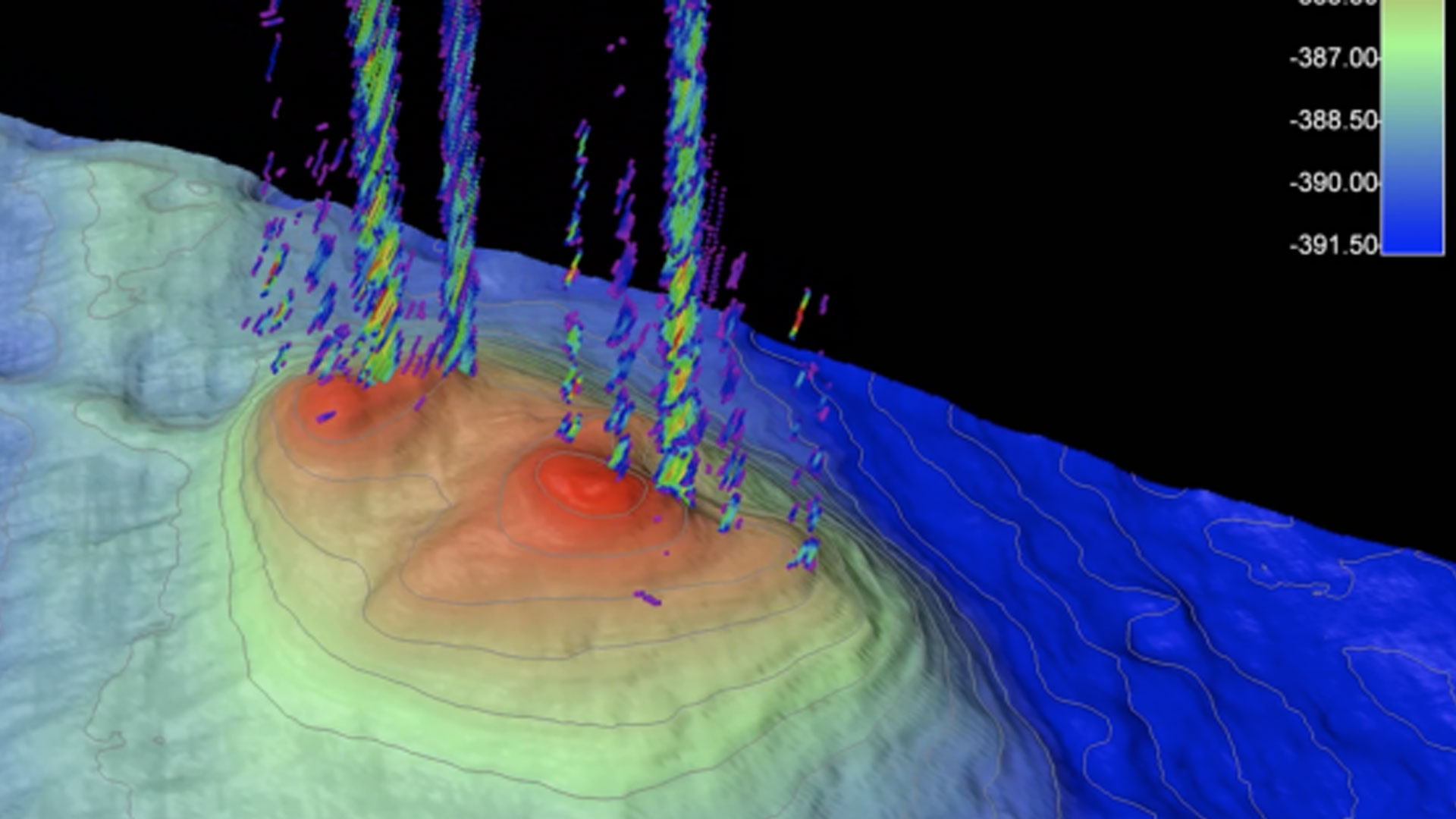 Domes of frozen methane may be warning signs for new blow-outs https://cage.uit.no/news/domes-of-frozen-methane-may-be-warning-signs-for-new-blow-outs/

Leaking pingos ‘can explode under the sea in the Arctic, as well as on land’ http://siberiantimes.com/science/casestudy/features/f0183-leaking-pingos-can-explode-under-the-sea-in-the-arctic-as-well-as-on-land

Based on reporting by Maja Sojtaric from the Center for Arctic Gas Hydrate CAGE, at The University of Norway.

Several methane domes, so called pingos, some 500 meter wide, have been mapped on the Arctic ocean floor, in the Barents sea region.

These structures may be a sign of soon-to-happen methane blow-outs, based on studies of massive craters, found in a near-by area.

These domes are the present-day analogue to what resarchers think preceded the crater formation.
The craters were formed some 12.000 years ago, during a time of deglaciation, when ice sheets retreated from the Barents Searegion.

“Every year we go back to the dome area with our research vessel, and every year I am anxious to see if one of these domes has become a crater,”
says lead author of the study, Pavel Serov, PhD candidate at CAGE.

At the time, two kilometer thick ice masses covered what today is the ocean floor. Under the ice sheet the methane transformed into hydrates,
a solid form of frozen methane.

“We believe that one step before the craters are created, you get these domes. They are mounds of hydrates, technically we call them gas hydrate pingos.
They are hydrate and methane saturated relics of the last ice-age.
They haven’t collapsed yet. And the reason is a matter of narrow margins” stated Serov.

The dome area is situated just north of the craters.

Hydrates are stable in low temperatures and under high pressure. The pressure of 390 meters of water above is presently keeping them stabilised.
But methane is bubbling from these domes, one of the most active methane seeping sites that have been mapped in the Arctic Ocean.

Some of these methane flares extend almost to the sea surface, and all the collected sediment cores from that area are loaded with hydrates.

There have been no studies done yet, on estimations of how much methane may be released into the ocean should the domes collapse, or when this could occurr.

More stable than in permafrost

However, these domes are considered to be more stable than the pingos found in sub-sea permafrost regions of the Canadian and Russian Arctic.

“The gas hydrate pingos in permafrost are formed because of the low temperatures.
But the water-depth that supports gas hydrates in sub-sea permafrost is only 40 to 50 meters.
There is no significant pressure there to keep them in check. And the sub-seabed permafrost is deteriorating.

Even though they are more stable than the permafrost pingos, the Barents Sea domes are on the limit of their existence.

“A relatively small change in the water temperature can destabilise these hydrates fairly quickly.
We were actually very lucky to observe them at this point. And we will probably be able to observe significant changes to these domes during our lifetime.” noted
lead author of the study Postglacial response of Arctic Ocean gas hydrates to climatic amelioration, Pavel Serov.

The results are published in Proceedings of the National Academy of Sciences (PNAS).
Reference: Serov, P., et.al.,Postglacial response of Arctic Ocean gas hydrates to climatic amelioration. PNAS 2017. Published ahead of print June 5, 2017, doi:10.1073/pnas.1619288114

Commentary
In my opinion judging from the press article, didn’t read the study, these structures while interesting present no methane danger,
because there are no signs that water in the depth of 390 meter will suddenly rise. From what i read the Ocean upper layer tends to become more stratified.
However, as mentioned sub sea permafrost located methane hydrates in lower depth could eventually be released. Even though there is no indication that it would
result in a sudden mega spike of atmospheric methane, even when considering that gases saturate the water column in such an event enough,
or rise too fast to become dissolved. I tend to think there will be a gradual, linear release, progressively getting worse.

However, because of geomorphological changes induced through more warming of the Arctic ocean, and thawing of permafrost,
and ice masses on land, we may get more seismic activity, and this in return could mean that structures like underwater pingos,
or permafrost related hydrate deposits begin to leak in response.

While it is generally accepted, that deglaciation leads to isostatic rebound, rising of land masses previously surpressed by the ice,
it is unclear on what time scales this will have a
measurable effect.

I recommend to watch the Climate State feature video on Ocean Methane craters, and watch to Climate Change in the Arctic and Model Projections,
the latest talk on that subject by professor of Geophysics Vladimir Romanovsky. For a general outline of the climate crisis watch the excellent
presentation by Aaron Thierry, The Brutal Logic of Climate Change.