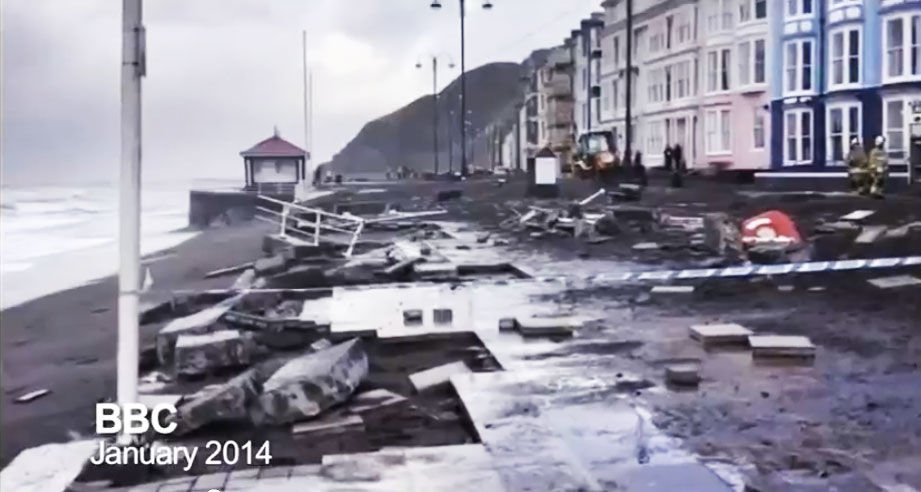 Peter Sinclair: I first interviewed Dr. Alun Hubbard on the edge of the Watson River in Kangerlussuaq, Greenland last summer. His vivid language and lucid storytelling made that video on of the most popular in the Yale Series. (see below)

Both Dr. Hubbard, and my Dark Snow Project cohort, Sara Penrhyn Jones, live in the tiny village of Aberystwyth, on the coast of Wales, and teach at the local university. I skyped with Alun a week or so ago in the midst of the storms hammering the area. Shortly after that he wrote me to explain that his roof had just blown off in hurricane force winds.

Sara was kind enough to shoot some video of the surf pounding the area, although not at the height of the storms, and she caught up with Hubbard long enough for a colorful and well informed take on a sentinel weather event.

I’ll cut together some of Aluns’ further remarks that did not make this video in the next day or so – see Hubbard’s Greenland interview below:

Put your *DIGITAL SIGNATURE* by sharing this post. *A SHARE* = *A SIGNATURE*.
We need million signatures to shake the ruling and make them take action to
save the planet.

I live inland from Aber- and in autumn commenced a building project when I
joked it would all go to plan unless we had the wettest winter on record! I
recently joked [whilst trying to nail the roof down in the storm] that
summer may be the driest.

Why does the Yale Climate Forum think it helps people to understand this
video if the commentary has to compete with a highly intrusive music track?

well living was fun while it lasted…

Brits would blame there problems on U.S

“…we had, I think, a 100-150 year storm in the first week of
January…then three weeks later we had another 100 year storm event…then
we had a 50 year storm a week ago last Saturday, and then yesterday,…we
had a hurricane come through…” Dr. Alun Hubbard #climatechange
#ukstormsurge2014

meanwhile, the oceans rose a record inch 2011 thru 2013.
http://climate.nasa.gov/key_indicators#seaLevel

Don’t live on the West Coast of the UK? Be very very grateful.

wow… I had no idea of the extent of the damage over there… this is
incredible. thank you for sharing this!

“We as a species have never experienced 400 parts per million of carbon dioxide in the atmosphere,” Guy McPherson, professor emeritus of evolutionary biology, natural resources, and ecology at the University of Arizona and a climate change expert of 25 years, told me. “We’ve never been on a planet with no Arctic ice, and we will hit the average of 400 ppm…within the next couple of years. At that time, we’ll also see the loss of Arctic ice in the summers…This planet has not experienced an ice-free Arctic for at least the last three million years.” For the uninitiated, in… Read more »

I have to say I was a bit annoyed at the repeated blame of UK weather on US weather, like it was the US’s fault. Especially since the actuality is US weather can be blamed on Indonesian weather. The string of cause and effect goes further than across the Atlantic but across the Pacific too. Of course in a way there is blame to be had for the EU and US and China (the top 3 co2 and other greenhouse gas emitters) and others for the weather problems. Since they are all contributing large amounts of greenhouse gases. So if… Read more »

Lucky there is Great Britain in the way.

just waiting for the dickheads who will insist nothing is happening. this
is climate change in action!

Reply
Go to Top
wpDiscuz
26
0
Would love your thoughts, please comment.x
()
x
| Reply
Cookie Consent
To provide the best experiences, we use technologies like cookies to store and/or access device information. Consenting to these technologies will allow us to process data such as browsing behavior or unique IDs on this site. Not consenting or withdrawing consent, may adversely affect certain features and functions. Learn more about the data usage on this website.
Manage options Manage services Manage vendors Read more about these purposes
View preferences
{title} {title} {title}