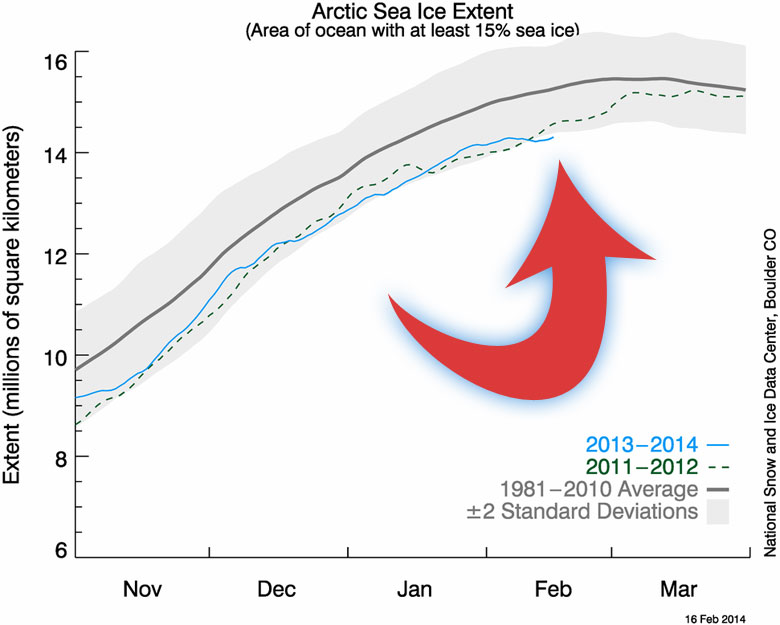 By Robert Scribbler: While the British Isles suffered a 60 day string of hurricane-force storms delivering the worst rain and wind events since 1766, while the Eastern US suffered numerous and crippling severe storm events, and while California flirted with a 500 year drought before succumbing to a deluge of 11 inch in one day rainfall, the Arctic has been outrageously warm for winter.

By this week, that excess heat had finally done its work on sea ice, setting a new daily record low for this time of year.

These, very low, sea ice area and extent measures are comparable to those seen during mid-May in 1979. If the extreme heat continues, we could see an end to the annual freeze season in February. But such an event would be rare and unprecedented. So it is too early to call.

Currently, conditions remain far, far warmer than normal with temperatures in the high Arctic are flirting with values typically seen during May:

The recent high temperature anomaly for this furthest north region is extraordinary with averages for the zone about 17 degrees Celsius above the norm. And all that extra heat is translating into record low or near record low sea ice on the ocean surface.

As mentioned in numerous other blog posts, these extraordinary temperature values, a part of an average Arctic climate now hotter than at any time in at least 44,000 years, has profound impacts on world weather. It drives severe changes to the Jet Stream that can collapse the polar vortex and push Arctic-type storms into the US, while ski slopes in typically frigid Sochi, Russia melt. It can turn the North Atlantic into a breeding ground for severe storms that last for more than 40 days and 40 nights in Great Britain. It can spark winter wildfires in Norway. And it can set off record heatwaves, January thaws and snow melt spurring avalanches that cut off entire cities in Alaska.

These kinds of difficult to manage changes are exactly what we would expect from the initial ramping up of human-caused warming. An intensification that features Arctic temperatures which drive record low sea ice totals during winter and result in Arctic temperature anomaly spikes that look like this:

Temperature anomaly for last 30 days when compared to the, already warmer than normal, 1981 to 2010 average. Image source: NOAA.

If you think the world here looks like it has a  fever, then you are right. And this, along with the severe weather changes we have witnessed this winter are exactly what we can expect from a world which humans are causing to rapidly warm.

For those looking into Arctic warming & #polarvortex links, Arctic sea ice extent is near a record low at moment http://t.co/5jWWqn1HMZ

Does not look like a big deal, especially since this is only one source, and others show higher values for sea ice extent (by a million square km). These values are less than 10% below the average values. http://ocean.dmi.dk/arctic/icecover.uk.php It is not surprising that the Arctic is about 6C above average. That is an offside to the Northern Hemisphere being a similar amount below average. This tends to happen when the jet stream drops further south; the cold, Arctic air travels south, being replaced by warmer, Pacific air. The warmer Arctic has resulted in less ice buildup. However, the colder… Read more »

Dan, the jet is not static and the DK site uses a different baseline. And you ignore this item here “The recent high temperature anomaly for this furthest north region is extraordinary with averages for the zone about 17 degrees Celsius above the norm.”