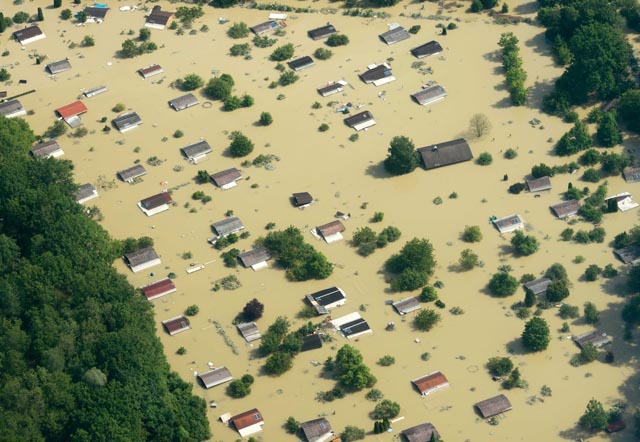 Dr. Jeff Masters / Wunderground: A historic multi-billion dollar flood disaster has killed at least eighteen people in Central Europe after record flooding unprecedented since the Middle Ages hit major rivers in Austria, the Czech Republic, Germany, Poland and Slovakia over the past two weeks. The Danube River in Passau, Germany hit the highest level since 1501, and the Saale River in Halle, Germany was the highest in its 400-year period of record. Numerous cities recorded their highest flood waters in more than a century, although in some locations the great flood of 2002 was higher.

The Danube is expected to crest in Hungary’s capital city of Budapest on June 10 at the highest flood level on record, 35 cm higher than the record set in 2006.The flooding was caused by torrential rains that fell on already wet soils. In a 2-day period from May 30 – June 1, portions of Austria received the amount of rain that normally falls in two-and-half months: 150 to 200 mm (5.9 to 7.9″), with isolated regions experiencing 250 mm (9.8″). This two-day rain event had a greater than 1-in-100 year recurrence interval, according to the Austrian Meteorological Agency, ZAMG. Prior to the late May rains, Austria had its seventh wettest spring in 150 years, which had resulted in the ground in the region becoming saturated, leading to greater runoff when the rains began.

The primary cause of the torrential rains over Central Europe during late May and early June was large loop in the jet stream that developed over Europe and got stuck in place. A “blocking high” set up over Northern Europe, forcing two low pressure systems, “Frederik” and “Günther”, to avoid Northern Europe and instead track over Central Europe. The extreme kink in the jet stream ushered in a strong southerly flow of moisture-laden air from the Mediterranean Sea over Central Europe, which met up with colder air flowing from the north due to the stuck jet stream pattern, allowing “Frederik” and “Günther” to dump 1-in-100 year rains.

The stuck jet stream pattern also caused record May heat in northern Finland and surrounding regions of Russia and Sweden, where temperatures averaged an astonishing 12°C (21°F) above average for a week at the end of May. All-time May heat records–as high as 87°F–were set at stations north of the Arctic Circle in Finland.

If it seems like getting two 1-in-100 to 1-in-500 year floods in eleven years is a bit suspicious–well, it is. Those recurrence intervals are based on weather statistics from Earth’s former climate. We are now in a new climate regime with more heat and moisture in the atmosphere, combined with altered jet stream patterns, which makes major flooding disasters more likely in certain parts of the world, like Central Europe. As I discussed in a March 2013 post,“Are atmospheric flow patterns favorable for summer extreme weather increasing?”, research published this year by scientists at the Potsdam Institute for Climate Impact Research (PIK) in German found that extreme summertime jet stream patterns had become twice as common during 2001 – 2012 compared to the previous 22 years. One of these extreme patterns occurred in August 2002, during Central Europe’s last 1-in-100 to 1-in-500 year flood.

When the jet stream goes into one of these extreme configurations, it freezes in its tracks for weeks, resulting in an extended period of extreme heat or flooding, depending upon where the high-amplitude part of the jet stream lies. The scientists found that because human-caused global warming is causing the Arctic to heat up more than twice as rapidly as the rest of the planet, a unique resonance pattern capable of causing this behavior was resulting. According to German climate scientist Stefan Rahmstorf, “Planetary wave [jet stream] amplitudes have been very high in the last few weeks; we think this plays a role in the current German flooding event.” More rains are in store for the flood area through Monday, then the blocking pattern responsible for the great 2013 Central European flood is expected to disintegrate, resulting in a return to more typical June weather for the next two weeks.

Figure 4. The northward wind speed (negative values, blue on the map, indicate southward flow) at an altitude of 300 mb in the mid-latitudes of the Northern Hemisphere during July 1980, July 2011, and the last twelve days of May 2013. July of 2011 featured an unusually intense and long-lasting heat wave in the U.S. (the 4th warmest month in U.S. history), and the normally weak and irregular waves (like observed during the relatively normal July of 1980) were replaced by a strong and regular wave pattern. Late May 2013 was also very extreme, resulting the great Central European floods of 2013. Image credit: Vladimir Petoukhov and Stefan Rahmstorf.

Links
Stefan Rahmstorf’s blog (translated from German) on the unusual jet stream patterns that caused the Central European floods of 2013.

NASA has high-resolution MODIS satellite images showing the flooding of the Elbe River in Germany.

My April 2013 post, “Unusually cold spring in Europe and the Southeast U.S. due to the Arctic Oscillation”, has a good summary of recent unusual jet stream patterns and the science behind them.

Video 1. Climate, Ice, and Weather Whiplash: In this June 3, 2013 video by the Yale Climate Forum’s Peter Sinclair, Rutgers’ Jennifer Francis and Weather Underground’s Jeff Masters explore the ‘Why?’ of two years of mirror images of weather across North America.