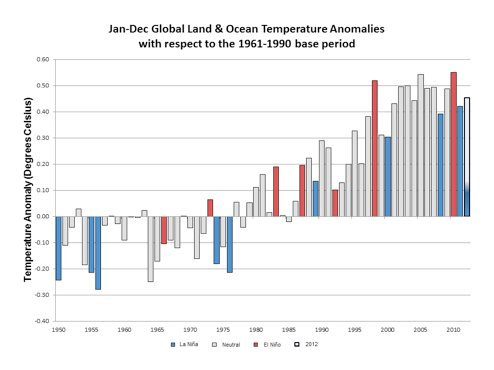 The year just past confirmed the Earth’s warming trend, which will continue and is reason for concern, says the World Meteorological Organisation.

LONDON, 2 May – Last year was among the ten warmest years since records began more than 160 years ago, the World Meteorological Organisation says.

The WMO says 2012 was the ninth warmest year recorded since 1850, and the 27th consecutive year in which the global land and ocean temperatures were above the 1961-1990 average.

The WMO Secretary-General Michel Jarraud said the continuing warming was cause for worry, and that it was on track to continue.

The assessment comes in the WMO’s Statement on the status of the global climate in 2012, the latest in an annual series providing information about temperatures, precipitation, extreme events, tropical cyclones, and sea ice extent.

The warming in 2012 happened despite the cooling influence of La Niña, a periodic upswelling of cold water off the west coast of South America which with its twin El Niño can affect weather patterns thousands of miles away. One of the effects of a La Niña episode can be to keep global average temperatures down.

“Although the rate of warming varies from year to year due to natural variability caused by the El Niño cycle, volcanic eruptions and other phenomena, the sustained warming of the lower atmosphere is a worrisome sign”, Michel Jarraud said.

“The continued upward trend in atmospheric concentrations of greenhouse gases and the consequent increased radiative forcing of the Earth’s atmosphere confirm that the warming will continue.

“The record loss of Arctic sea ice in August-September – 18% less than the previous record low in 2007 of 4.17 million sq km – was also a disturbing sign of climate change.

“The year 2012 saw many other extremes as well, such as droughts and tropical cyclones. Natural climate variability has always resulted in such extremes, but the physical characteristics of extreme weather and climate events are being increasingly shaped by climate change.

“For example, because global sea levels are now about 20 cm higher than they were in 1880, storms such as Hurricane Sandy are bringing more coastal flooding than they would have otherwise”, said Mr Jarraud.

Above-average temperatures were recorded during 2012 across most of the globe’s land surface areas, most notably North America, southern Europe, western Russia, parts of northern Africa and southern South America. But cooler-than-average conditions affected Alaska, parts of northern and eastern Australia and central Asia

Precipitation across the globe was slightly above the 1961-1990 long-term average, although with drier-than-average conditions across much of the central US, northern Mexico, north-eastern Brazil, central Russia, and south-central Australia.

In early July, Greenland’s surface ice cover melted dramatically, with an estimated 97% of the ice sheet surface having thawed by mid-July – the largest melt extent since satellite records began 34 years ago.

The difference between the maximum Arctic sea-ice extent on 20 March and the lowest minimum extent on 16 September was 11.83 million sq km, the largest seasonal sea-ice extent loss in the 34-year satellite record.

“It is vital that we continue to invest in the observations and research that will improve our knowledge about climate variability and climate change,” said Mr Jarraud.

“We need to understand how much of the extra heat captured by greenhouse gases is being stored in the oceans and the consequences this brings in terms of ocean acidification and other impacts.

“We need to know more about the temporary cooling effects of pollution and other aerosols emitted into the atmosphere.” – Climate News Network