Global warming over the last 16 years 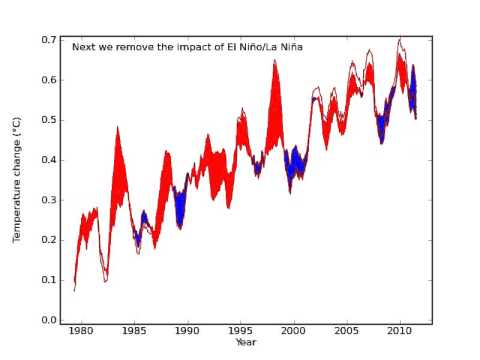 SkepticalScience: Human greenhouse gas emissions have continued to warm the planet over the past 16 years. However a persistent myth has emerged in the mainstream media challenging this. As a simple illustration of why the myth is wrong this video clarifies how the interplay of natural and human factors have affected the short-term temperature trends, and demonstrates that underneath the short-term noise, the long-term human-caused global warming trend remains as strong as ever.

Notes
We have attempted to keep the language in this video at the same non-technical level as the media stories it refutes. As a result, it has been necessary to simplify much of the terminology. The following notes are for technically literate readers.
“is the same as before”: i.e. If a change in gradient is allowed at 1997 then the change in gradient is not statistically significant.
“in line with projections”: i.e. Within the envelope of AR4 trend projections.
“we will see faster warming”: On the basis of both AR4 projections and that global GHG emissions are increasing.

Transcript
Mankind has continued to warm the planet through greenhouse gas emissions over the past 16 years. However, a persistent myth has emerged in the mainstream media challenging this fact. Let us examine what has been happening.

Here are observed global temperatures for the past 130 years from NASA. The last 35 years show a significant increase in global temperature. However the rate of warming is not uniform – there is a lot of variation from year to year.

Some of the variation comes from natural causes. Major volcanic eruptions inject small particles into the upper atmosphere, which trigger a strong cooling effect over a few years. Ocean cycles such as El Nino also affect temperature: El Nino years tend to be warmer and La Nina years cooler.

Is there any evidence for a slow-down in greenhouse warming over the last 16 years?

In order to detect a change in the human contribution to climate change, we have to first separate out the natural contributions.

First, we remove the cooling effect of the volcanoes, along with the smaller effect of changes in solar activity.

Next we remove the pattern of warm and cool years caused by El Nino and La Nina.

What is left is the human contribution to climate change, plus some wiggles due to weather.

So is there any evidence of a change in the rate of human-caused warming over the last 16 years?

No. The human contribution over the last 16 years is the same as before. Human-caused greenhouse warming, while partially hidden by natural variations, has continued in line with projections.
Unless greenhouse gas emissions are brought under control we will see faster warming in future.

How Google News is Hiding Global Warming
July 4, 2021
Subscribe
0 Comments
Inline Feedbacks
View all comments
Go to Top
wpDiscuz
0
0
Would love your thoughts, please comment.x
()
x
| Reply
Cookie Consent
To provide the best experiences, we use technologies like cookies to store and/or access device information. Consenting to these technologies will allow us to process data such as browsing behavior or unique IDs on this site. Not consenting or withdrawing consent, may adversely affect certain features and functions. Learn more about the data usage on this website.
Manage options Manage services Manage vendors Read more about these purposes
View preferences
{title} {title} {title}