Abrupt Climate Change In The Arctic (And Beyond) An Update AGU Fall Meeting 2013: Our understanding of future Arctic change is informed by the history of past changes, which often have been both large and abrupt. The well-known ice-age events such as the Younger Dryas show how sea-ice changes can amplify forcing to produce very large responses, with wintertime sea ice especially important. These changes are increasingly seen to have played a central role in the ice-age cycling through their global impact on CO2 storage in the deep ocean.

The Heinrich events reveal processes of ice-sheet/ocean interaction, some of which are being played out in Greenland and Antarctica now, and which may have large future effects on sea-level rise. The paleoclimatic record plus physical understanding greatly reduce the worst worries about instabilities from methane stored in cold places, but tend to support a role in amplifying future warming.

Overall, the very large impacts of past Arctic changes, and the likelihood that future changes under business-as-usual fossil-fuel emissions will be unprecedented in combined size and speed, raise important questions.
Release URL http://virtualoptions.agu.org/media/GC34B-01.+Abrupt+Climate+Change+in+the+Arctic+(and+Beyond)A+An+Update+(Invited)/1_ftc9qk9e

CO2 is a trace gas, What a scam, This about the total control of people,
land and business. If not stopped it will result result in the death of
millions but not because of any weather event.

Oh so now the animal pof the month is a Musk ox . You guys never quit wit
the bullshit . I guess the polar bears are not as effective , and I’ve
noticed even coca cola has taken them off their cans now . This dufus
sounds like milhouse from the simpsons .

I’m a climate change infidel . Here’s what I don’t believe : Carbon taxes
going to third world countries are not going to make even a bit of
difference . If you climate zombies actually want to make a difference
DEMAND that all carbon taxes go into planting more trees .

45:00 … finally this annoying fuck stops talking. Can’t you just speak a
language the rest of us can understand ?

Yup! We have abrupt climate change in the Arctic and beyond. Just like this
poster says. look how abruptly he is made wrong!

Global warming is a proven hoax. The Earth is actually cooling. The IPCC
recently slashed it’s estimates for warming in the 21st century to just 1.6
c.

you are a dumb asssss

This narrator belongs on the Howdy Dowdy Show, or could be a replacement
for mister Rodgers.

This is mostly correlation and not causation.

There are clearly some remarkably misinformed people commenting on this
talk. Man made climate change (global warming) is indisputable hard
science. Its also getting progressively worse year after year. Just accept
it and move on

Carbon, as in ‘carbon pollution’, is co2, which we all breath out and the
earth’s plantlife depend upon. There is a ‘greenhouse gas’ that is much
more effective for causing climate change. That gas is water vapor. SO WE
MUST ABOLISH CLOUDS OR WE WILL ALL DIE! Mankind has done 1/100000000
towards co2 emmisions. The climate change thing is a monstrous scam by the
world controlling banking elites who control entire nations with their
monetary policies. Get informed please.

This is the cycle that mankind should be increasingly worried about:
Rise in CO2 and resulting rise in temperatures.
Melting of ice and 200+ foot rise in sea levels.
Reduction in the temp difference between the poles and the equator and
resulting slowing of the ocean currents.
Reduction in the level of oxygen in the oceans resulting in anoxic oceans.
Growth of H2S producing bacteria and resulting poisoning of the atmosphere.
Increased temperatures releasing more methane into the atmosphere (25 worse
as a greenhouse gas than CO2) and more poison into the air.

There have been numerous ice ages and heating before we started burning
fossil fuels. Seems pretty dumb to spend money on something we can’t
control like mother nature. To spend trillions of dollars on something you
can’t control and has been happening over again for millions of years is
DUMB. Just like all the stupid studies the government spends our tax money
on.

Can we please stop giving these people more credit than they deserve.
Scientists are skeptics, continually questioning and hypothesizing and
testing. These people are deniers, there is no scientific basis for their
skepticism. This cartoon sums it up pretty well: 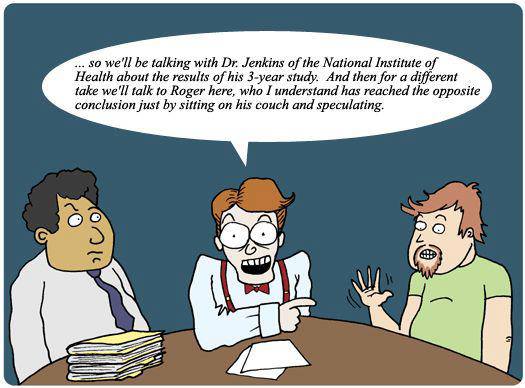 There are HUGE dragons out there, but for the most part the geologic record doesn’t reveal this, because the rate of climate change today is virtually unprecedented, and that can and WILL make ALL the difference in the end. So I would STERNLY warn the world against over reliance upon the geologic record when it comes to deciding what to do or not to do, and included in that is when. Having said that, I am just going to quietly turn and walk away now, because virtually no one has ever really wanted to hear what I personally have to… Read more »

Does it really matter if it’s the sun, us or geothermal? The Earth “is”
warming and the process is accelerating. The accelerating is accelerating
and will have a significant affect on humans. Food, water and energy are
the 3 main factors that everyone needs to focus on. Time to turn off
Reality TV and prepare. Don’t rely on Monsanto to feed you. If we stop all
Co2 now, the Earth will still keep warming until the balance can be
repaired. No one knows how long that will be and how many of us will be
left.

Question: what does he mean by “climate change”? He makes it sound like we’re responsible for 100% of the CO2. We’re not. We are responsible for only 4% of the total amount of CO2. Only 4% – got that? He also makes it sound like it keeps building up – but it doesn’t – there is a CO2 cycle just like there is a water cycle. Lies, lies, lies. “Possible dragons” = theoretical nonsense. The planet isn’t going to do anything that it hasn’t done before. By the way, maybe he could do something about Etna and Sinabung before trying… Read more »

At 2:58 his 40,000 lbs CO2 per bod per year is incorrect, it’s 10,000 lbs
CO2 per bod per year in 2013. His other science looks good though, just I’m
better at sums, and his head-nodding etiquette for American politicians
(with finger feature) is notable in the video “Nutty brainiac scientist
meets Mr. Potato Head”. I suppose he might be a (gag gag) American in which
case he’ll never have been told that there’s “persons” in the jungles
across the sea, hence the 40k# each.

The facts are that atmospheric CO2 is increasing because of human’s refusal
to slow it down – We Have Become A Huge Geophysical Force !
that means we are warming our planet…
that means our climate system is energizing…
that means weather patterns are transitioning to a regime that will be very
detrimental to our complex society and the human’s that depend on it.

By far, one of the best slideshows I’ve seen.

Cut the childish analogies and get to the facts, please.

Reply
SUBSCRIBE
THE CLIMATESTATE PORTFOLIO
Above prices may have a different currency. Cost represents the stock value at the time of addition to portfolio. Our portfolio only includes BEV stocks. This is not a financial advice.
SUPPORT CLIMATESTATE
DONATE PATREON
Go to Top
wpDiscuz
28
0
Would love your thoughts, please comment.x
()
x
| Reply