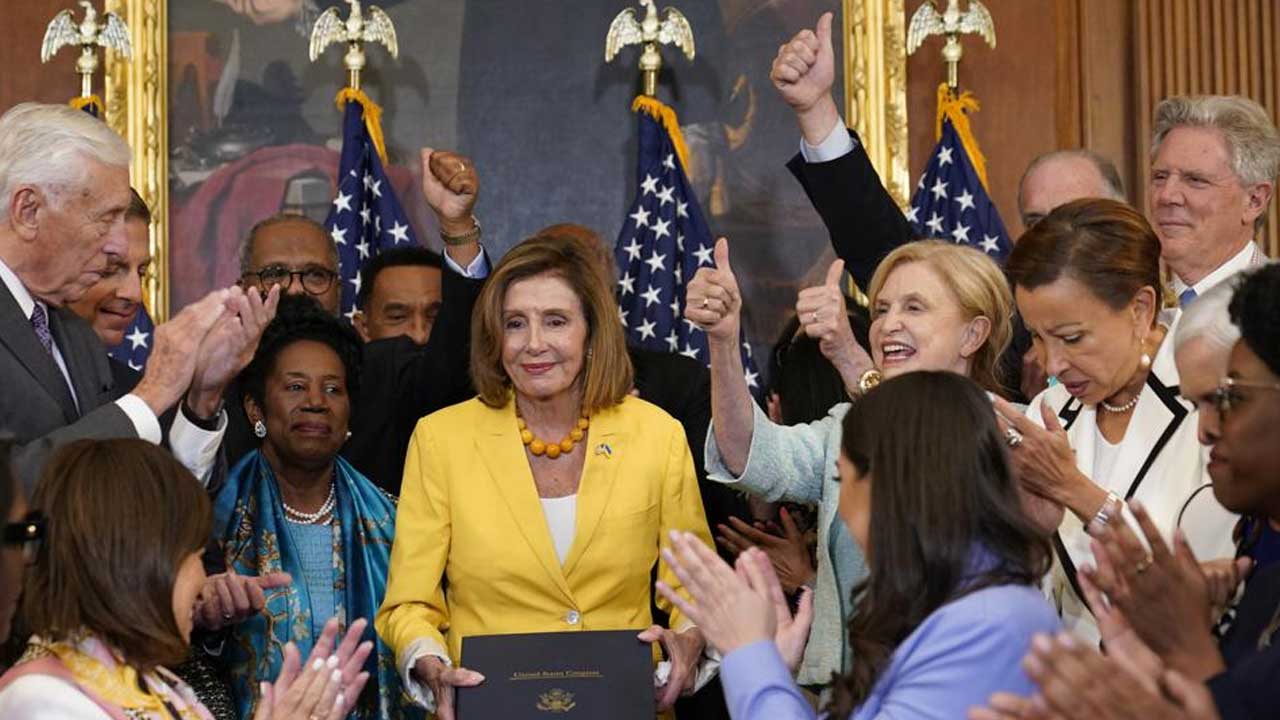 Scientific American: The Senate’s passage of a monumental climate bill comes after decades of legislative defeats, but it is still an early step in drastically reducing greenhouse gas emissions.

CLIMATEWIRE | Three decades after ratifying the world’s first climate treaty, the Senate passed a sweeping budget bill Sunday that pours hundreds of billions of dollars into the clean energy projects needed to decarbonize the economy.

The vote represents a breakthrough for U.S. climate policy. In clearing the Senate, Democrats overcame a hurdle that has tripped up past climate bills. And with $369 billion in climate and energy spending, the legislation has the potential to turbocharge U.S. decarbonization efforts.

Even so, the so-called Inflation Reduction Act doesn’t look like the climate bill that many lawmakers and advocates had long imagined. It is not Waxman-Markey, the doomed cap-and-trade bill that died in the Senate in 2010. It does not include the Clean Electricity Performance Program, a provision floated last year that would have paid utilities for selling clean power and penalized those that did not.

And it’s not “Build Back Better,” the sprawling legislation passed by the House of Representatives last year that included vastly more money and stronger climate provisions than today’s Senate version.

Instead, the bill came chock-full of provisions that have long been anathema to environmentalists. There were guarantees for new oil and gas leases, and tax credits for carbon capture and sequestration. Notably absent was any requirement to actually reduce emissions.

But in securing a mountain of cash needed for the rapid decarbonization of the U.S. economy, senators passed the most significant climate legislation in U.S. history. The bill, if passed by the House, would direct billions of dollars to everything from traditional renewables like wind and solar to emerging technologies like clean hydrogen, sustainable aviation fuel and advanced nuclear power. It could put the country on track to cut emissions 40 percent of 2005 levels by the end of the decade.

The House used a party-line 220-207 vote to pass the legislation, prompting hugs among Democrats on the House floor and cheers by White House staff watching on television. “Today, the American people won. Special interests lost,” tweeted the vacationing Biden, who was shown beaming in a White House photo as he watched the vote on TV from Kiawah Island, South Carolina. He said he would sign the legislation next week.

The measure is but a shadow of the larger, more ambitious plan to supercharge environment and social programs that Biden and his party unveiled early last year. Even so, Democrats happily declared victory on top-tier goals like providing Congress’ largest ever investment in curbing carbon emissions, reining in pharmaceutical costs and taxing large companies, hoping to show they can wring accomplishments from a routinely gridlocked Washington that often disillusions voters.

Slate: The Democrats’ Climate Bill Also Helps Fossil Fuels. But How Much? Evaluating the ugly parts of the historic legislation.

Americans feeling the heat of climate change will find a lot to like in the Inflation Reduction Act—and a decent bit to criticize. Overall, the climate movement has cheered the bill’s $370 billion climate investment, albeit with reservations about some of its fossil-fuel tradeoffs. My colleague Jordan Weissmann recently addressed some of the more prominent complaints: that the bill requires federal lands and offshore waters utilized for renewable energy development to also be opened up for oil and gas drilling, and that the deal reached with Sen. Joe Manchin included future concessions that could greenlight a West Virginia gas pipeline and ease the process for permitting new energy projects. Add to all that nitpicks like the IRA’s subsidy of arguable climate solutions like “clean” hydrogen, carbon capture and storage, biofuels, and big electric automobiles to the exclusion of non-car EVs. It’s a lot of buts.

As always, two things can be true: The IRA is an unprecedented and necessary climate bill that will reduce emissions to a significant degree, and it has some flaws. It was never going to be any other way—Democrats’ narrow hold on the Senate, the influence of big business, a hostile judiciary, and Americans’ extreme sensitivity to gas prices meant there would have to be compromises on any climate package. Yet even with these snags, many analyses of the bill have determined it to be a net good. The think tank Energy Innovation calculates that for every ton of carbon emissions from new oil and gas, there will be 24 tons reduced due to measures governing buildings’ energy use, home electrification, and green lands set aside as carbon sinks. So with the IRA now making its way to President Joe Biden’s desk, it’s worth taking stock of just how much of a boon it will be to fossil fuels.

Let’s start with the IRA’s mandate to tie renewable development on federal lands and waters to auctions on millions of acres to fossil fuel drillers. Oil historian Gregory Brew doesn’t think this is as apocalyptic as some have made it out to be. “Investment in new offshore projects has been declining over the last five years,” he told me in a message, “and recent lease sales have generated only tepid interest.” Notably, even when the Biden administration has held such auctions, like in the Arctic National Wildlife Refuge or the Gulf of Mexico, oil firms have not always taken them up. The Bureau of Land Management’s own statistics consistently show that when government-owned acres are put up for auction, only a small portion of that land is purchased. Brew also pointed out that offshore fossil fuel development is expensive, even without the additional fees on the practice in the bill. (There’s also now competition from increasingly subsidized offshore wind.)

The Center for Biological Diversity, an environmental nonprofit and leading critic of the IRA, takes a more pessimistic view, noting that the hundreds of millions acres for drilling locked into the bill far exceed the average leased acres auctioned off in a given year. The sheer scope on offer to fossil-fuel producers is what concerns the group: “This is a devil’s bargain that handcuffs even one offshore wind project to offering up 60 million acres of federal waters for offshore drilling—that’s the area of four West Virginias every year for a decade.”