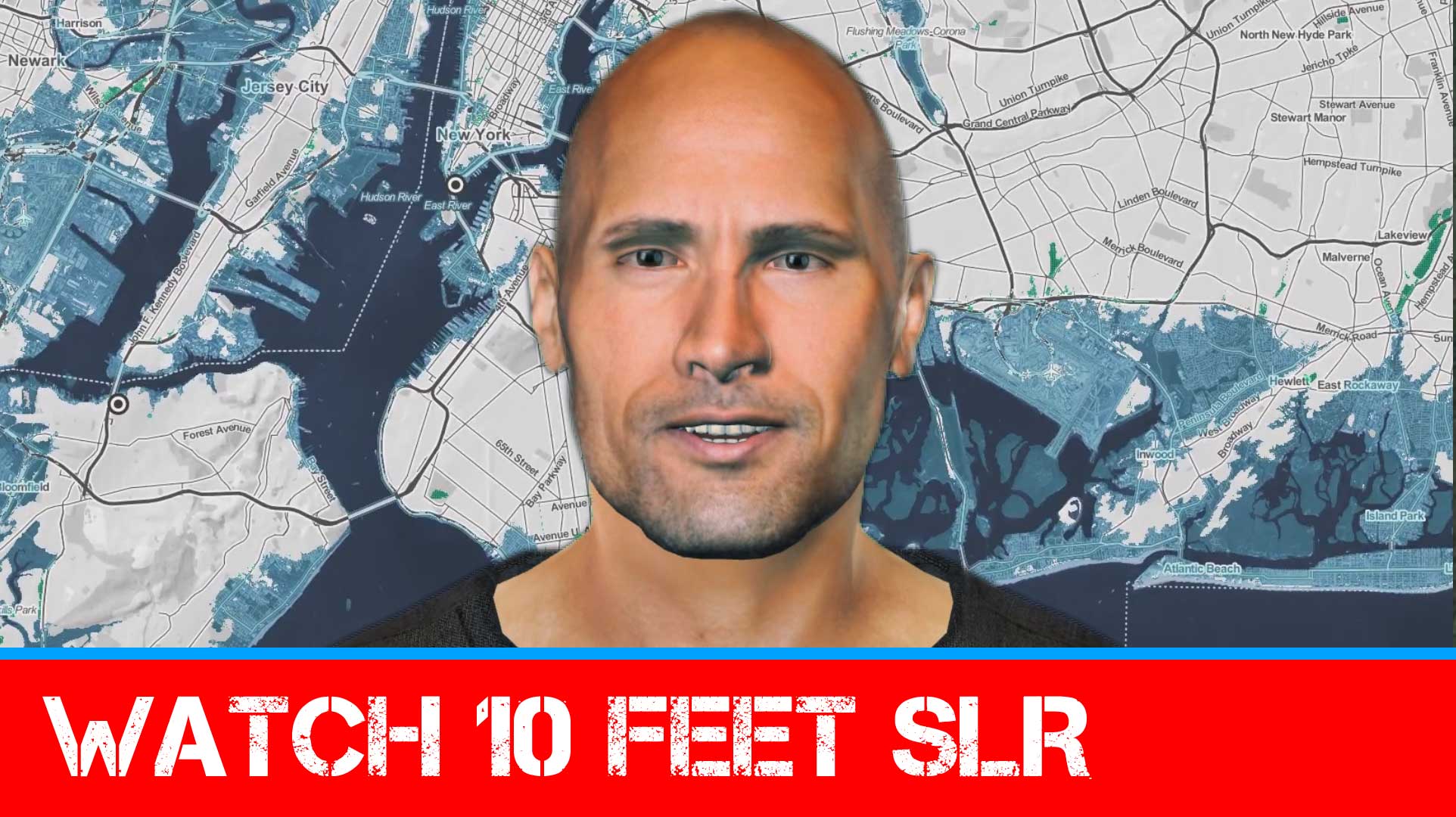 Visualisation of sea level rise of 10 feet (3 meters), based on the risk zone map, provided by Climate Central.

Current estimates about future sea level rise, consider up to 10 feet already locked in, due to the greenhouse gas emissions we have emitted so far.
How fast this will happen is not certain yet. However, some scientists argue for a 10 feet of sea level rise as soon as in the next 50 years.

The visualization of sea level rise is displayed here with a uniform distribution, however, actual sea level rise will vary regionally, can divert 3 to 4 times the average.

Together, the Greenland and Antarctic ice sheet hold about 200 feet of sea level rise.

Research by scientists of the U.S. Geological Survey suggests increased rate of sea level rise are already happening, with sea level rise rates 3 to 4 times higher than the global average along a large stretch of the U.S. East Coast.

The reason for the difference, is that the Atlantic, more than the Pacific, is characterized by a strong “overturning” ocean circulation, technically known as the Atlantic Meridional Overturning Circulation, or AMOC, that spans the north-south length of the globe and ultimately connects waters off New York with those at the tip of Antarctica.
This means that waters circulate through the entire Atlantic much faster than they do throughout the Pacific.

Additional to salt water intrusion, coastal erosion and higher storm surges needs to be accounted for.

Megacities and food production near river deltas and on low lying lands, around the world are threatend by rising Ocean waters. China, India, Bangladesh, Vietnam, Indonesia, Japan, the US, Philippines, Egypt, Brazil, Thailand, Myanmar, and the Netherlands are considered to be particular vulnerable to sea level rise.

Salt water goes sideways through soil, really fast, and crops can’t grow in soils with salt in it. With only four foot of sea level rise we can loose 25% of the worlds crops, through flooding.

Risings seas will virtually affect everybody, including power plants, infrastructure, property, food production, entire populations living on low lying lands.
And then the question what happens with all the flooded land, with all the stuff we built there, or put there, things like landfills, dump sites, and all the things which will begin to rot once submerged.

Why the U.S. East Coast could be a major ‘hotspot’ for rising seas https://www.washingtonpost.com/news/energy-environment/wp/2016/02/01/why-the-u-s-east-coast-could-be-a-major-hotspot-for-sea-level-rise