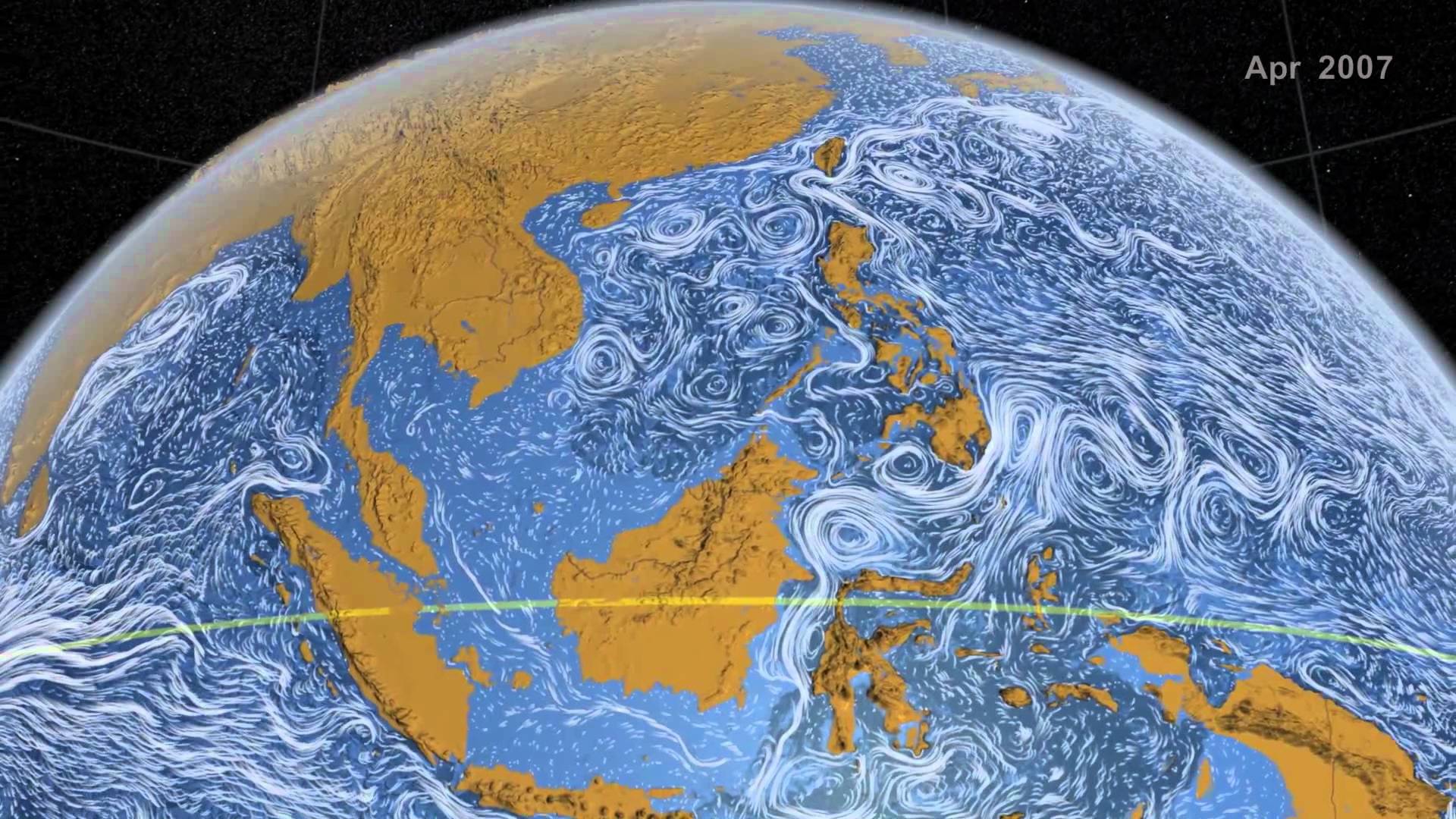 This visualization shows ocean surface currents around the world during the period from June 2005 through Decemeber 2007. The visualization does not include a narration or annotations; the goal was to use ocean flow data to create a simple, visceral experience.

This visualization was produced using NASA/JPL’s computational model called Estimating the Circulation and Climate of the Ocean, Phase II or ECCO2.. ECCO2 is high resolution model of the global ocean and sea-ice. ECCO2 attempts to model the oceans and sea ice to increasingly accurate resolutions that begin to resolve ocean eddies and other narrow-current systems which transport heat and carbon in the oceans.The ECCO2 model simulates ocean flows at all depths, but only surface flows are used in this visualization. The dark patterns under the ocean represent the undersea bathymetry. Topographic land exaggeration is 20x and bathymetric exaggeration is 40x.

This video is public domain and can be downloaded at: http://svs.gsfc.nasa.gov/vis/a000000/…

*”Published on Mar 29, 2012*
*This visualization shows ocean surface currents around the world during
the period from June 2005 through Decemeber 2007. The visualization does
not include a narration or annotations; the goal was to use ocean flow data
to create a simple, visceral experience.”*

Very cool !! I’m sure the marine bioligist will be very interested in this
.

You guys who show gross disrespect to the creator GOD who created you and
all things that exsist around you all, Start to be thank full to the Great
GOD for the breath of life, let me ask you all a question, where dose
thought come from? ( these videos are great)

Interesting. It shows the Coriollis effect and the formation of
individual cyclones that may travel thousands of kilometers. This explains
why it is so difficult to predict the weather

actually this is not video , but a graphical representacion so it was
recreated by a human and a computer …

Gulf Stream from Africa to Europe? Its actually visible here and its from
Gulf of Mexico to Europe, thats why its called Gulf Stream 😀

And you can see South Equatorial stream that connects to Gulf Stream around
0:35

Only humans can f** up the beauty of earth with senseless discussion of
what to believe or not. Its a picture and it tells you what the earth looks
like. If you don’t like it, go somewhere else. Another universe, where the
rules are simpler, more philosophically easy and psychologically pleasing
(~Feynman)

yes obviously you went into detail clearly! Your arguing over that its GOD
when fucking neither of us or anyone for that matter has proof its just
funny how science has taught us more than a book written thousands of years
ago by people that weren’t intelligent as they are now if those people were
alive in today i bet you that book would be re vamped. it has been changed
so many times / the years and the actual 1st edition which was Hebrew has
been misunderstood. as Lewis Black even says that.

the proof is all around, including the video that started this
conversation. I know the Truth. and you can know it too. 1-855-UCANKNOW

So you are an idiot, because you comment this video. I hope your the first
one to die.

who are you? explain.

let me just say that i have faith in God and i do believe there is a heaven
and hell but i also believe in science. prove to me he exists you cant only
by faith can YOU believe. and all those people who supposedly saw him its
more of a medical thing were the tumor made him visualize events and makes
it look like you talked or saw him. NO ONE knows for sure intill they die,
so till then, stop being a jackass

One side of out Moon almost all blank, (not many craters)… One Side of
our Earth almost all water… A coincidence?

Wouldn’t that be something!

I don’t make the rules? Wow, you really are a fucking dunce, I don’t have
to read the rest of your shit. You’re clearly a retard.

C’mon man. I was joking. I am a theist, but I actually know what influences
ocean currents. God doesn’t belong in Science, but to call ocean currents
random unorganized chaos only speaks to how much you understand. Understand?

One World, one Ocean
love this video

This is a great animation of the ocean currents.