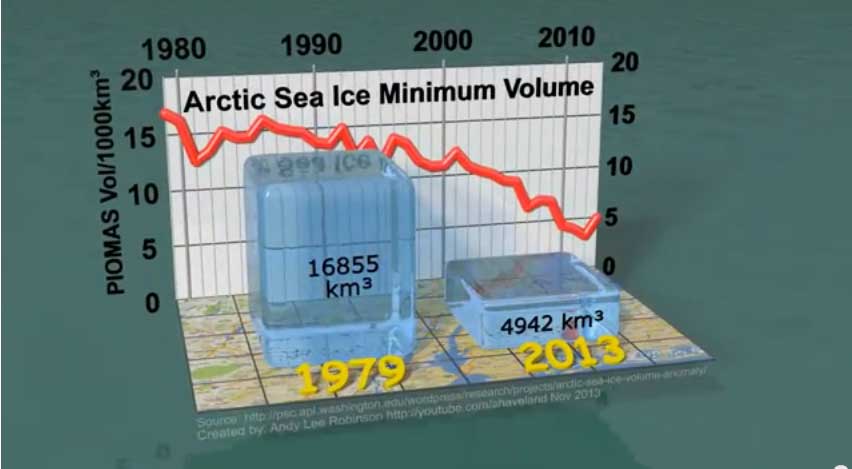 Published on YouTube Nov 21, 2013: This is an animated visualization of the startling decline of Arctic Sea Ice, showing the minimum volume reached every September since 1979, set on a map of New York with a 10km grid to give an idea of scale. It is clear that the trend of Arctic sea ice decline indicates that it’ll be ice-free for an increasingly large part of the year, with consequences for the climate.
(I also composed and played the piano music, “Ice Dream”. A longer improvisation can be found here:http://youtu.be/_miBCygvO4Y )
A full HD 1080p version is available for broadcast, and can be customized.

The rate of ice loss in the Arctic is staggering. Since 1979, the volume of Summer Arctic sea ice has declined by more than 80% and accelerating faster than scientists believed it would, or even could melt.
The first ice-free summer in the Arctic Ocean is expected to happen between 2016 and 2022.

About the data: Sea Ice Volume is calculated using the Pan-Arctic Ice Ocean Modeling and Assimilation System (PIOMAS, Zhang and Rothrock, 2003) developed at APL/PSC.
Source data for this graph is available fromhttp://psc.apl.washington.edu/wordpre…

More information:
The image first appeared in still form on Think Progress, and I decided to try to bring it to life over the following weeks:
http://thinkprogress.org/climate/2013…

[…] Published on YouTube Nov 21, 2013 This is an animated visualization of the startling decline of Arctic Sea Ice, showing the minimum volume reached every September since 1979, set on a map of New  […]